Why I Wore a Hoodie on Sunday

“I have a dream that my four little children will one day live in a nation where they will not be judged by the color of their skin, but by the content of their character.”

On Monday, these words appeared in the feeds of so many of my friends all across social media. We tweet and retweet them because we love the power Dr. King’s words conveyed. We love the hope that he inspires us to. We love the picture of equality that he creates.

But, recently in Oklahoma, Senate Bill 13, proposed by Sen. Don Barrington says this: 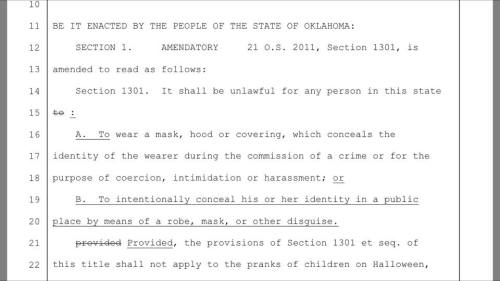 Where is the dream in this?

Beginning with a Disciples of Christ Church pastor, then supported by the United Church of Christ conference of Kansas and Oklahoma, a group of pastors and churches said no.

On the Facebook page created for the event, “Wear a Hoodie at Church Sunday” said it is not about the hoodie.

“Hoodie Sunday” isn't really about hoodies – it's about sticking up for each other; empowering our communities to come together in love, reconciliation, and understanding; equipping our police to serve and protect us all as fairly.”

So, during the pastoral prayer time on Sunday morning, I put on my hoodie and told the congregation, The Federated Church (A PCUSA, UCC, Disciples congregation) why.

I said part of what it means to be a person of faith is to use our voice to speak truth to power. When our lawmakers propose legislation that goes against the teachings of Jesus—as we’ve come to understand them—that God loves and affirms the gifts of all people, we’ve got a serious problem.

This is what I most know: Oklahoma Senate Bill 13 is merely a diversion to the real issues that need to be addressed in our state—as UCC conference minister, Edith Guffey has recently remarked. And it's a bill that further discriminates against people of color and those whose religious practice includes covering their heads (not two groups of people Oklahoma is friendly with in general already).

I have to admit, I’m not the most political pastor. I believe, it’s a fine line to walk when you bring opinions about legislative actions into the pulpit. As an ordained American Baptist I believe in the separation of church and state. Never do I want to be known as a person who is campaigning from the pulpit for any one political party or candidate (not to mention it’s illegal). When I speak to something “political,” it’s not a decision made in haste.

But, I left church on Sunday glad I wore the hoodie in the pulpit, at least in a small way to have conversation about race and the laws of the land in Oklahoma.

And, I was even more thankful for this decision on Monday when Kevin, a friend and I attended the Martin Luther King, Jr. parade in downtown Oklahoma City.

I guess I shouldn’t have been shocked, but I was. Kevin, my friend and I were some of the very few white people there (beside the police). What??

In contrast, you could just feel the restlessness in the air as we walked toward the parade’s start on 7th and Broadway, side-by-side several African-American families.

As I observed the by-standers picking up candy and dancing to the beat of drums, eyes spoke to me. And what I heard was:

“Dr. King’s dream has not yet made it to Oklahoma.”

I remembered why such ridiculous legislation called Senate Bill 13 existed. It’s normal for many operate in Oklahoma from the perspective of an all-white bubble. White tunnel vision does not receive a challenge.

But, if we truly are going to be people of Dr. King’s dream—what are we going to DO about it?

Hoodie Sunday in Oklahoma was just a start . . .