What are we celebrating tonight? (Christmas? Anyone excited about Santa? And still some of you might say it is Jesus’ Birthday?)

Tonight is not Jesus’ real birthday (hate to burst your bubble on that one) because no one really knows for sure. However, tonight was chosen as the occasion for the Eve of celebration because of its correspondence on the calendar year with the season of darkness, at least in Northern hemisphere. In the year 350,  December 25th became the official Christmas day by a decree from Pope Julius on to correspond with Winter Solstice– the longest and thus darkest night of the year.

And though the words “presents” “joy” “mistletoe” or even “baby” sit as the centerpiece of what we think about this time of year, especially tonight– we’d be completely off track on this holy night, if we didn’t start our conversation together about scripture with the word: darkness. 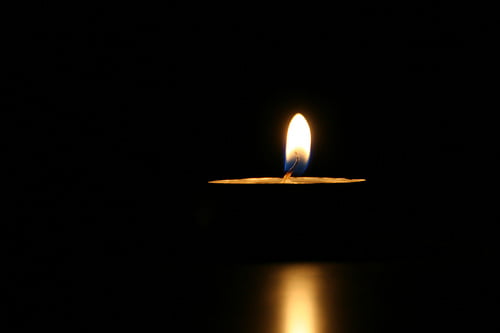 “The people who walked in darkness have seen a great light; those who lived in a land of deep darkness– on them light has shined.”

I don’t know the last time that you found yourself in complete darkness– where you literally could not see what was right in front of your face, where you were putting one step in front of the other hoping that you would not fall or run into a wall. It’s a rarity in our days of electric everything in the city in which we dwell and emergency readiness kits and flashlights at our bedside. City lights and guiding light posts are nearly everywhere, even in the most remote parts of our land.

Professor Karoline Lewis tells a story of being with her family in the Black Hills of South Dakota on a tour of Jewel Cave– a place where she experienced darkness in a dramatic fashion.

After travelling down roughly forty flights of steps deep into the cave, the lights guiding the tour are extinguished, plunging those walking into total darkness.  “Of course,” Lewis writes, “this is not just to show you how dark it is. We all know that. Rather, it is a reminder of that oft-forgotten fact that without light, even the smallest speck of light, our eyes will never adjust to the darkness. We could be down in that cave five minutes, five hours, five years and still never see our hands in front of our faces. This is what darkness does to you.” (Thanks Abby Thornton for sharing this great story with me!).

And, such was the situation described in our Isaiah text before us this evening. Though not literally in physical darkness, everything metaphorically around the original hearers of the text was dark.

Corrupt leadership was in power. Terrorist driven enemies were at the nation’s doorstep. Spiritual leaders were no longer valued for insight they could provide. Mothers worried about their children’s futures. Fathers worried about seeing their children grow up in a free and fair land. And, the rich were getting rich and the poor were getting poorer.

Virtues like hope, peace, joy and love that we’ve been talking about all Advent season– were not on the main stage of community life and interactions with one another as the prophet Isaiah spoke these words of the Lord.

For as much as we gather this evening in the cheer of our holiday colors and sweaters, for as much as we gather with the warm fuzzies that we get from singing the Christmas carols in community that we’ve known since childhood, for as much as our stomachs are full of Christmas cookies, special pies and holiday bread– we also understand Isaiah’s words of what it means to be a people who are living in a land of darkness.  For just as we’ve experienced the drudgery of short days for the last several weeks– going to work in the dark and coming home in the dark– which psychologists say is their busiest time of the year (the darkness seems to depress all of us more than normal it seems), many of us have also approached Christmas season this year, very well aware of the emotional and spiritual darkness that surrounds our lives.

Beloved ones will no longer be around our dinner table this year and we miss them more than words can say.

We’ve found our jobs cut our hours, pay us less and expect us to be happy about it anyway.

We’ve faced new realities about our own lives that have left us confused, disappointed and lonely.

Beloved friends and family members have endured suffering after suffering, seemingly unable to catch a break and in journeying alongside them, our hearts have broken too.

“The people who walked in darkness have seen a great light; those who lived in a land of deep darkness– on them light has shined.”

And it to this state of darkness, that all of us know something about, Isaiah speaks a word of prophecy saying: “Listen up, all of you who know you are in the dark, all of you who can’t see even a shimmer in front of your faces– a GREAT brightness is about to shine, a light is coming.”

Yet, as the passage goes on, what is indeed strange about this gift of a light is that it was foretold to come in the most vulnerable, most innocent, and most unassuming of package: a baby.

For Israel, the light was not going to come through a triumphant new king who would just appear on the scene and slain all those who ever said a word of harm against them as they hoped. It wasn’t going to come by anything they’d seen before and could predict logically on a spreadsheet. And, it most certainly wasn’t going to come on their timetable.

The gift was to be called as verse six tells us: Wonderful, Counselor, Mighty God, Everlasting Father, and Prince of Peace (anyone hear Handel’s Messiah playing in the background as I read these words?)

Biblical scholars go on to burst Handel’s and our bubbles again here saying that Isaiah in fact, was not envisioning Jesus when the words were penned– many think they were prescribed about the prophet were about Azaz (the corrupt king ruling Israel at the time)’s son, Hezekiah– that he would be the spiritual leader that Israel needed next to be saved from their enemies.

But, regardless, this is what we know as we continue reading in the second testament, in the gospel narratives, that hundreds of years later, another child is born. And, this would not just be any child, not just a child who grew up to be a just leader, or a skillful teacher, or even a boy who grew into a man who would make his momma proud– though this child would be all of these things.

This child would be the GREAT light that forever broke the bonds of life-crippling darkness, whose life would say to future generations: “No more let sins and sorrows grow nor thorns infest the ground: I come to make God’s blessings flow far as the curse of darkness is found.”

And the world would forever be different, why? Because the light came. The light shone. The light brought hope that there was more to this life than the darkness all around.

And, this would be the hope: for all of us, past present and future who have found our lives walking in darkness, that in Jesus, we can be in the light too.

As many of you know that in January, Kevin and I had the opportunity to travel to Israel with several leaders of other faiths from the Reston area. And, one of the highlights for me of the trip was to spent a couple of hours one day in Bethlehem, the city we are told in gospel reading for tonight is the place where Jesus was born.  While visiting the Church of the Nativity, I was awestruck there unlike any other place of among the Christian sites we visited of the holiness of the location said to be the birthplace of Christ. Though again, no one could prove without a doubt that this was the exact place of this historical event, but I didn’t quite care.

After descending the stairs into a small chapel named for Mary and placing my hand on a spot designated as the spot of the birth– I felt the light. Maybe it just was by sheer connection to the thousands of Christ seekers and skeptics alike who had placed their hand on the same spot too. Maybe it had something to the do with the spiritually charged trip I was already having. Maybe it was because I had already visited countless Jewish and Muslim sites already and I was thrilled to final be in a place that was important to my faith. Yet, regardless, I tell you the light was there. It was a powerful moment of faith for me.  Call me a CathoBaptist, but I was ready to walk the aisle of faith all over again in the middle of this Catholic church. For there just is something powerful in thinking about the light… the very face of God come to earth.

He’s the light that can make the most sarcastic of us this Christmas open our heart to believe again.

He’s the light that can break through the coldest of hearts, the most horrid of circumstances– stuck right in the middle of what the carol calls the bleak mid-winter.

He’s the light that can give us all hope that what we see or can’t see right in front of us is not all there is.

He’s the light that says to our overwhelming and oppressing of circumstances– rejoice for a new joy is here.