Outside the Bible belt, Sunday School in its traditional form is a dying model. I hate to break the hearts of those of you who love it, but in my ventures in pastoring in the DC metro region, I’ve found in each setting I’ve worked in that the typical 9:30 am class– known as the place where church growth occurs from the traditional models– isn’t just all it used to be.

In a fast paced city like DC, where long commutes define the weekly patterns of even the most faithful members, asking folks to give up another hour of their time on Sunday morning is usually too much to ask. They need sleep. They need family time.  They need to come to worship which in our case, doesn’t start until 11 am.

So, if you are really going to ask people to make the sacrifice to come earlier, it has to be worth their time without exception.

At Washington Plaza we’ve tried a new venture for the past several months in an effort to expand our small group offerings and to interest folks in coming to church for spiritual study who might not fit into a traditional Bible Study class.

We’ve had growth in the area of young adults (the under 40ish crowd) in the past year, and knew we needed to offer something that would fit their interests and spiritual needs.  The class began last summer with some pretty standard topical curriculum and one or two faithful students, but not much more energy than this even though coffee and snacks were provided. (Food is great for drawing a crowd, you know, but not all that it takes).

Then, entered a non-traditional curriculum given to us by our sister church in DC called Modern Music and the Psalms. It was a lot of fun, especially to see the intergenerational class form and have weekly discussions about artists like Indigo Girls, Kayne West, the Beatles as compared to the Psalms. 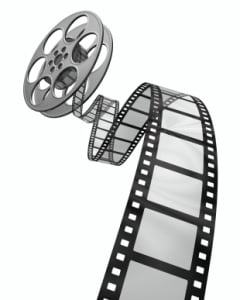 The group had so much fun so that they wanted to keep going with this approach to study. The current class curriculum is something that Kevin and I are putting together each week called, Modern Movies and the Gospels. The first Sunday was an introduction to the gospels– what defines each, what the synoptic gospels are, and why studying the words of Jesus are important.

Then, each week following a fairly recently released film is selected. The class is asked to watch the film during the week (if they want), but if not, come ready to watch a selected clip of the Movie of the week in Sunday School. Discussion questions have been based on a theme presented in the film as it relates to a gospel lection that seems to work best.

So far, films such as Chocolat, The Lion King, Meet the Parents, Gran Tornio, among several others have been enjoyed with discussions ranging from topics such as “What is Prayer?” “Loving Those Who are Hard to Love” and “Enduring Friends.” I love hearing laughter and lively discussion coming each week from the classroom down the hall from my office as the group meets. This coming Sunday, the movie of choice is Saved . . . and I can’t wait to hear what the group says about this film!

The class is still debating what is next. Maybe Scripture and Poetry? Who knows? But, it is for certain that by thinking outside the norm just a little, folks do come and the community of study and friendship that is formed as a result is the best of what the church is about!