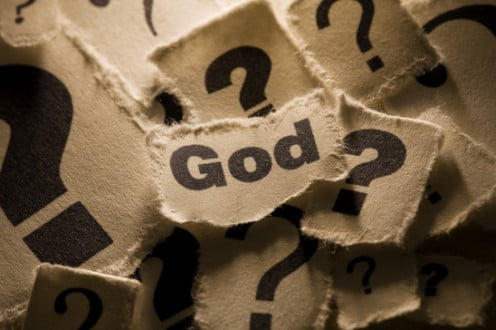 Let me just start by saying, In fact, some of my pastor friends just can’t believe I’d be brave (or stupid enough) to pick it for my focus scripture this morning.  (Did you read this text? Click on the link above before you move on).

It has often been said by many sociologists that our view of the Divine as an adult has a lot to do with our experiences of childhood.

Was our father or mother kind, loving and merciful when mistakes were mad? Then, we probably have room in our heart to view God in this way too.

Was our father or mother absent, inattentive, or making promises they could never keep? Then, we probably have little vision to see God in any other way.

Was our father or mother cruel, abusive and manipulative? Then, we probably get stuck in this place often—not realizing God could be something different.

Our parents, for good or for bad, shape us, mold us into grown up beings with distinct ideas about how loved we are, how valued we are, and how all this changes (or not) when we mess up.

And with all of this true-- especially if we grew up in angry or unstable households--- passages like this one from Jeremiah 4 can be hard to swallow. For they can perpetuate our hunches about God as someone we can’t trust or be in relationship with.

Verse 11 begins like this: “At that time, it will be said to my people and to Jerusalem: a hot wind from me out of the bare heights in the desert toward my people . . . Now it is I who speak in judgment against them.”

(I know these are some less than positive words to hear, but hang with me for a minute).

Commentators help us see that Jeremiah 4 is situated within a part of the book that speaks of the nation of Judah’s sins. And these are the sins:

And not only this, but going back earlier in the chapter helps us see that Judah will soon be taken over by the Babylon—another country that did not fear the Lord either. An all out rebellious situation.

So from God’s perspective--- it’s as if everywhere God looks in the world—God can’t find a righteous community God can’t find groups of people who are seeking out the Holy. God does not see anyone using their lives to bring about love, justice or peace in the land.

Verse 22 says: “For my people are foolish, they do not know me; they are stupid children, they have no understanding. They are skilled at doing evil, but do not know how to do good.”   Well, now.  Alright. Let’s just pause for a minute right here.

Harsh words, wouldn’t you say? But very clear ones too. Judah was actin’ a fool. There was just no other way to describe it.

So by time we get to verse 28 we hear the punishment: “Because of this earth shall mourn, and the heavens above grow black; for I have spoken, I have purposed; I have not relented nor will I turn back.”

As I read this passage this week, I couldn’t help but have visions of an event that happened 15 years ago today running through my head. 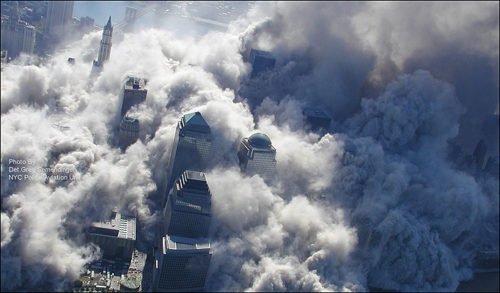 Visions of the day when a city turned into black rubble, smoke and ash. Visions of the great destruction that feel so unexpectedly on our land—a day we will remember by asking one another “Where were you when the planes hit the towers?”

And while reading this passage with visions of that 9/11 day, I couldn’t help but think of all the commentary some offered as to why this horrific event occurred.

Do you remember the story that hit the airwaves less than a week after 9/11/2001 happened?

The Rev Jerry Falwell and Pat Robertson asserted on US television interview that an angry God had allowed the terrorists to succeed in their deadly mission because the United States had become a nation of abortion, homosexuality, secular schools and courts, and the American civil liberties union.

These two leaders said America was getting the punished we deserved for not following God’s will on these social issues.

Their words, as you might remember were not readily accepted by Christians or even the general public. But they stuck by them anyway while many other pastors, including those of our denomination scratched their heads and said, “We don’t believe in a God who punishes like that.”

And I can imagine that few if any of you would agree with what Falwell and Robertson said about that day.

So how then do we situate ourselves with this picture of God in Jeremiah 4?

What’s most interesting to me about the choice of language of the passage are the kinds of pronouns used. Did you hear how God referred to the people in verse 22? “For MY people are foolish.”

The word “my” is a pronoun of belonging. We use it when we speak of things or people important to us, don’t we? My house. My car. friends. My child. And even more so, to say that someone is “my people” is a term of endearment, isn’t it? If I were to stop here a list for you this morning those who I consider among “my people” then I would be telling you about my very best friends, wouldn’t you?

I think it’s important to note because it shows us that God is not treating the rebellious nation of Judah with an arm's-length relationship.

No, God is saying, speaking in the lovingly yet firm tone a father might speak to his teenaged son who stayed out till 2 am when they were to be home at 11 for the 5th time:

“My boy, I’m tempted to take your butt to where the sun doesn’t shine.”  (or fill in your favorite expression here).

And I think in the same way as father who with a teenaged boy who has kept making bad choices—God speaks to Judah.

Jeremiah 4 is a loving reprimand. It’s a prophetic word not about wanting to be “that mean man upstairs” or the source of evil happening the world, but rather the restorer of the relationship, longing for the relationship to be made right again above all with human kind.

And, things get even clearer as we take a step back from the passage and notice how many times in the text the word “Looked” (or in my Bible the word “see”) is used within the passage. Professor Portier-Young offers us this gem: it’s the same Hebrew word used in Genesis chapter 1 when God looks upon creation and says, the God “sees that it was good.”

The connection between the two texts helps us SEE this intention of the Lord: re-creation. 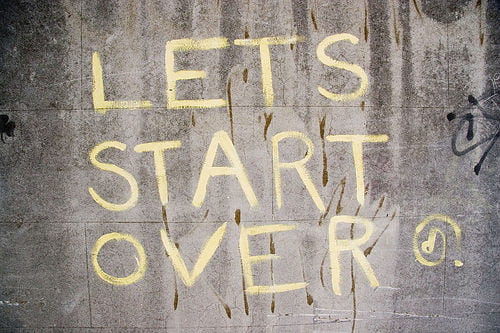 The only solution is to start over!

And in order for this to happen, we too, much see what we maybe don’t want to see:

A world that is deeply broken and that has fallen short of God’s best plans.

A created world that groans with the consequences of our evil ways as a collective whole.

And a heavenly parent who allows us to experience the effects of our actions.

And in seeing the world as it really is, then, and only then, Jeremiah helps us to realize can we move forward with God in paths of righteousness once again.

Look with me again at verse 28: “For I have spoken, I have purposed; I have not relented nor will I turn back.”

It’s a declaration of unending relationship. It’s a way of saying, “No matter how many times you mess up, I still will be here.”

While I could never find myself in camp of Falwell and Robertson—saying that 9/11 was somehow God’s punishment for our sins —I do think that we miss the mark as Christian people when we don’t take responsibility for our actions, when we don’t ever say we’ve sinned, we don’t fall to our knees and lament.

For when we allow the news commentators to be the loudest voices on days like today—voices that will blast our American supremacy without taking an honest look at who’ve we become as an American people—we miss our prophetic witness as a church.

For isn’t it true?

We are a people who take advantage of the poorest among us by laws that favor the rich.

We are people who devalue others through our offerings of less than adequate schools, healthcare and social services for those who are have brown skin.

We are people who cast aside the untouchables among us: the elderly, the imprisoned, the foster children—allowing them to live their lives without contact and care from us.

And I could keep going and going....

Sometimes God doesn't like what we do. Sometimes we have to make peace with our consequences. And always LAMENT is the only way forward.

So before you rush off to something else-- think about this question:

Where have we as a nation fallen short of loving and caring for our neighbors as the scriptures have told us time and time again to do?

It could be racism.

It could be low wages for the most vulnerable among us.

It could be how we treat immigrants.

The thing is that we’d probably not all agree what we need to lament over as a nation. And that’s ok. It’s a part of the diversity that makes our human family so beautiful.

But, stop right now and write something down. Offer to God in prayer.

Let us be hearers of this text by stopping to take responsibility for how WE as a collective people have missed the mark. Then and maybe then, we won't see God as one who punishes, but a God who longs for us as a people to be WHOLE.