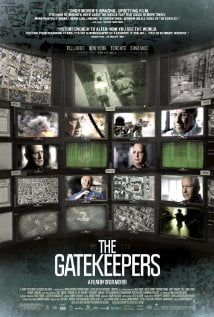 I love independent theaters. I love films that may or may not get press or bring filmmakers lots of money, but present a message through their art medium that make you think. I love films that stir up conversation long after the credits roll.

For me one such film I recently watched in the documentary called Gatekeepers. While nominated for an Oscar, winning a Cinema for Peace honor and getting rave reviews from the critics, I’d never heard of it until I was browsing the options for a movie night.

I read the description: “A documentary featuring interviews with all surviving former heads of Shin Bet, the Israeli security agency whose activities and membership are closely held state secrets” and was immediately intrigued.

Maybe this just sounds to you like a nerdy way to spend a night out (and I fully admit here my nerdy status), but in actuality my interested piqued from the fact I spent 10 days in Israel alongside a Inman, a Rabbi, and evangelical pastor in 2011.

It was a trip that brought my mind and spirit to the center of the crisis of the Middle East in ways that just don’t leave your heart when you return home.

We called our trip a “delegation of peace.” And though it is usually every pastor’s dream to take a tour to the Holy Land at some juncture in their ministry (and I was one of them)– this was not your normal journey to the Holy Land.

We traveled to intentionally together to explore the conflict between the Palestinians and the Israelis in the eyes of one another. We wanted to explore the sights important to each of our religious traditions, as children of Abraham, with an openness to learn without our natural biases. We sought to meet with peacemakers on the ground on both sides. And, we wanted our congregations/ places of worship to grow in friendship with one another when we returned home.

Throughout the journey, I came to believe there is no better way to see Israel and the Palestinian territories than with an Rabbi and Iman by your side.

For the Holy Land is more than about the life and work of Jesus, as many Christians bulldoze their way into the country in big tour buses– it’s the center of history our friends in the Jewish and Islamic tradition as well, meant to be respected and honored.

Now, I can’t imagine going back to Israel any other way or a conversation about the region without consideration for the perspective of both Israel and their Palestinian neighbors.

I loved that Gatekeepers took me back to this place of learning and reflection on the complexity of history, politics and ideology that shapes the current state of affairs in Israel today.

I appreciated that Gatekeepers showed the humanity– both the good and not so good– of the Shin Bet, Israel’s security agency. Sometimes the best decisions that could have been made at the time occurred– and sadly innocent people died anyway. Sometimes poor choices in security cost hundreds their lives (and livelihood). Sometimes top Shin Bet official wept for lives lost and also wished for a better way of relationships between neighbors (as much as they were/ are labeled the “bad guys”).

I appreciated the commentary on religious leadership within the region– highlighting the crucial role such leaders play in persuading the hearts and minds of people, for good or evil.

I appreciated the fact that the film ended without a political message of either pro or against Palestinian statehood and/ or a new Middle East peace agreement BUT with the statement that peace will come through friendship. It’s not the message I expected– to be pro greater military occupation or even different new political leaders. But, simply friendship. Peace through friendship.

Go out and see Gatekeepers with a friend! You’ll be glad you did.

By the way, our group blogged our way through the journey, if you are interested in more specific reflections check out our trip website hosted by George Mason University).

Feeling Out of Sorts
Next Post: You’ve Always Got to be Open