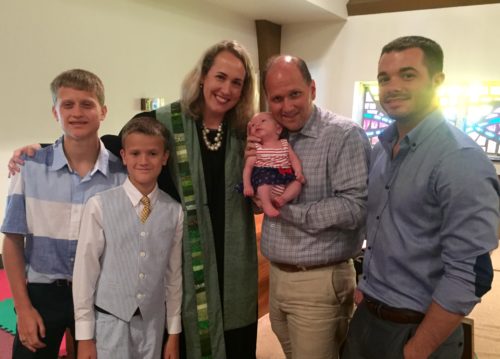 These are busy days around our household for as many of you know in addition to having a new baby around the house and putting the final touches on launching my book, Birthed, I’ve been serving a short-term pastorate at North Chevy Chase Christian Church in Chevy Chase, MD.

I began there in July and will serve as senior pastor on a part-time basis till October when this congregation’s minister returns from her Sabbatical.

If you aren’t familiar with this denomination, read more about them here. It’s a great fit for my progressive leaning, yet still Jesus loving self. And I’m so thankful for the Capital Area Disciples for welcoming me so warmly since I moved back to DC last year.

It has been fun getting to know North Chevy Chase folks and most of all to be designing and leading worship with them each Sunday.

At heart, I’m really a series preacher. I love taking a topic or theme and staying with it for 4-6 Sundays. It’s a great way to LEAD through preaching, helping the congregation get their head around a big idea (and I love big ideas!) But when you’re a guest minister (which is what I do a lot of these days) you don’t have the opportunity to always carry a series out. So, I’ve cherished this special experience.

Over the past couple of weeks, we’ve gone off the lectionary texts and focused our attention in worship on the theme of “Excuses, Excuses.” What are the excuses we offer God which keep us from living abundantly?

Someone came up to me after church yesterday and said this series really surprised her. “I thought you’d just be guilting us as to why we aren’t this or that, but instead what you’ve given an opportunity to look inward and find out what keeps us from close relationship with God. I’ve needed this time, pastor!”

Right on! (It’s so fun when people get what I’m trying to do!)

First we tackled the excuse of “I’m Afraid” taking our cues from the courage of Esther’s story in the Old Testament.

Next we examined the excuse of “I’m a Defect” looking at the encounter Jesus had with the Syrophoenician woman– championing her boldness to not let the challenges of her life define her.

Then, this past Sunday we stuck close to the excuse of “I’ve Made the Unforgivable Mistake” by reading Psalm 51 and thinking about the tale of David and Bathsheba from the book of 2 Samuel.

And I have to say that this Sunday was one of my favorite experiences of worship in a long time! I realized once again that so many of us (if not all of us) hold things inside, believing the worst about ourselves, and rejecting God’s sweet forgiveness.

It was so great to say: “There’s nothing you (and I) can do to separate ourselves from God’s love” over and over again. We all need to hear it.

In response to the sermon, I invited the congregation to write down on the post-it note in their bulletin something in their life that they felt like was “the unforgivable sin.” Then, as we all sang together, one by one everyone came forward and placed the post-it note in a paper shredder as a sign of God’s forgiveness.

I stayed at the pulpit watching this all play out until the line reached the end.

And I have to say, that I fought back tears as I heard the shredding sound over and over again.

It was some of the most beautiful spiritual music I’d heard in a long time. For with each post-it note going into, it was a sign of God’s unconditional love and forgiveness for a person, and then another, and really for us all. What amazing grace! (And it’s something you can try at home… go find your paper shredder too!).

A man came up to me after worship and said, “I’m not one to be writing sins on pieces of paper and bringing them to the front of the church, pastor, but today, reminded me of God’s love again.”

For this response and the others I will never know about– I say thank you for the gift of preaching, of leading and of being a part of a particular community. It’s the best stuff interim ministry is made of!

To Wait 8 Years
Next Post: “You Should Really Be in the Church, Full-Time”