When I was growing up in the Southern Baptist Church, I learned the Christian life was about these things:

I don't think my faith is could be measured by any of these acts anymore, but it doesn't mean I've thrown scripture out.

Paul had some words to share on the manner to the church in Philippi. As his parting gift to this congregation that had meant to so much to him as a missionary and preacher—he too wrestles with the question of what does it mean to live a Christian life.

The book of Philippians is the known as one of the happiest books in the Bible. It’s one of those books that you just feel inspired and convicted by all at the same time. It’s a book often cited by many Christians as their favorite book of the Bible. And I have to say it tops the favorite list for me.

But there's one catch about this book: Paul is writing while in prison. He’s been put in chains in Rome on behalf of his faith that the governmental leaders at the time didn’t like too much. His death might be near.

It’s almost like Philippians becomes his last word and testament: everything Paul has always wanted to say (or say again) and hasn’t had a chance yet.

And by time we reach chapter 3, we’ve gotten to know Paul at deeper level when he boldly proclaims that “everything was a loss in comparison of the gift of knowing Jesus” and that most of all Paul wants “to know the power of his resurrection and share in the fellowship of his sufferings.”

So, when we reach chapter 4, I can imagine that some of the readers of this letter were bursting, were overflowing, were saying, “Stop, stop, Paul. You’ve given us so much to take in. We can’t take any more.”

But what Paul does is give them more. Every good speech needs a strong concluding hook, right? Every great race needs a victory lap right? Every want-a-be graduate of the ways of Jesus needs “This is now how you live,” right?

And so we arrive at: “Advice for the Christian Life by Paul.”

Several years ago, Katie Couric, popular news anchor and journalist—was asked to give the commencement address at a university in Cleveland, OH. Quickly, she found herself in a quandary as to what to say. She wanted to do a good job, and thought of the idea of crowd sourcing many of her famous friends, asking as many the question: “What was some the best advice you’ve ever gotten?”

Katie was overwhelmed by the response and the generosity of time and thought of many that she began piecing all of the responses together—not just for this one commencement address but for a book published in 2011 called, The Best Advice I’ve Ever Gotten.

One such entry in Katie’s book came from, Joyce Carol Oats, award-winning author, poet and playwright. She offered advice to any young people seeking to walk in her footsteps with these words:

Don’t be envious of others!

Read widely—what you want to read, and not what someone suggests you should read.

Don’t expect to be treated justly by the world, though you might try to treat others justly.

Don’t too quickly cut yourself off from the possibilities of experience.

Don’t give up. What is to say, don’t be discouraged!

Take all advice with the proverbial grain of salt.

And even if we are not aspiring to be writers or artists—Joyce Carol Oats gives us some pretty wise offerings, don’t you think, in all her direct, staccato like statements?

Paul’s edition of “The Best Advice I have to give you” comes to us in a similar fashion. It’s clearly to the point that you can almost feel him in the room beside as he’s saying these words:

“Rejoice in the Lord always. Again I say rejoice. Let your gentleness be known to everyone. The Lord is near. Do not worry about anything, but by prayer and supplications present your requests to God. And the peace of God that passes all understanding will guard your heart and mind in Christ Jesus.”

What’s most interesting to me about this text is how much Paul changes gears from chapter 3 to chapter 4. In chapter 3, we almost feel out of breath with him in the running the race metaphors and fighting the good fight.

But Paul's “best advice ever given” starts with: “Therefore, my brothers and sisters . . . stand firm in the Lord.”

Stand firm is a very different from pressing on the race isn’t it? 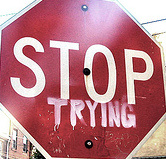 Trying to reconciling these images is complicated! But one of my professors from seminary; Susan Eastman offers some suggestions saying that the answer lies in the prepositional cause “in the Lord.”

Eastman writes, “In the Lord, our forward movement [in the spiritual life] is like our constant movement on the surface of the earth; we are held fast by gravity at the center . . . constantly in motion but also constantly at rest.”

She goes on to say that we can’t just be in motion, doing, doing, and doing all the time in our spiritual lives without rest because: “Without this center of gravity, this grounding in the settled presence of Christ . . . the life of faith as a race quickly become frenetic and destructive.”

Or in other words—Paul is saying the Christian life is not just about what we do but it is about how we’re standing and who’s holding us. And that’s Jesus.

Yes, we strive for the spiritual disciplines to know Him and we run the best race we can. But, at the same time we remain planted in Lord. We wait upon the Lord. We are still. We allow the Lord to do what only the Lord can—which is of course a great mystery to us.

We do so because the kingdom of Jesus abides in a whole other reality—a reality that is not based on what we see, what we can rationally prove, or even how we feel about our lives on any given day. And this reality is what Paul exhorts us to stand firm in. Just as David wrote about in the great Psalm of the church: “The Lord is my Shepherd. I shall not want. He leads me by still waters . . . “

For the Christian life, my friends, is not just about what we do. The kingdom of Jesus is about something much deeper and embodied. So in the end, this passage which at first glance may appear to be a laundry list of instructions for living—becomes words that point back to Jesus. The One who simply asks us to stand firm.

So, how do you live the Christian life? When in doubt, stand firm. Jesus will take care of the rest! No evangelical checklist needed.