Life is really hard and we have to learn to talk about it.

In so many Christian communities I know, there's such a "How are you?" "I am fine" sweetness in the air.

We look pretty. We talk pretty. And we go home from being together as hurt as we walked in the doors.

For, in the hand shaking, having snacks at coffee hour, or even in the minutes before a committee meeting starts-- we don't say much though we were up half the night worrying about ____.

We don't say that we're having trouble paying our bills this month. We don't say that our marriage is in a rocky season or our child was just found with drugs or is soon going to be kicked out of school.

There's so much we keep to ourselves.

Now, I know I'm stepping on toes as I say this, but from the pastoral seat I've held over the last 12 years, I've seen church folks preferring our vision of reality than our actual reality.

And the next call we get on the prayer chain about someone who took their own life might just be someone we'd "never suspect."

Or as my Instagram friend, Stephi Wagner posted recently, "If you are still surprised that people are choosing suicide over living in this broken world, you haven't been paying attention."

Why? Because we have no idea who we're worshipping alongside.

And what happens if your pastor is that person who is suffering silently?

In my book, Birthed, I write about what it was like to be the pastor of a congregation while also going through the deep heartache of child loss, infertility treatments and adoption failure. And then what it was like to move to a part of the country where I couldn't find work and lost all sense of identity outside my husband's. I became a regular church attendee with so much un-ease in my heart. 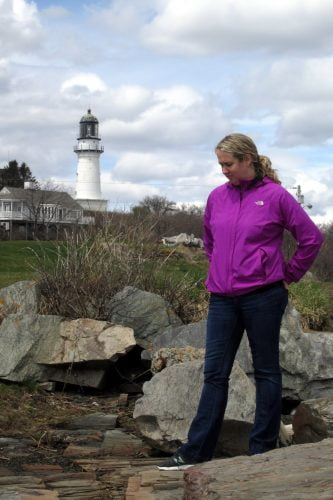 It was a season of so many dead ends, heartbreak and loss.

It was a season where nothing seemed to get better as much as I hoped it would. And a season where I felt like life was just too hard to keep living.

Even when I was on a vacation to the beauty of Maine's coast, the sadness still seemed to follow me (as seen in this picture a friend snapped when I wasn't looking).

I have to tell you that I woke up for many months aching physically because my heart was just that sad. And even though I sought treatment from my doctors for depression, it often felt like I was more depressed than the medication could help. I just couldn't get out of bed.

Though I did not go as far as having a plan for how I would take my own life, I wondered a lot (a lot!)  if anyone would miss me I if were gone.

Making myself get dressed and do something every day just felt like too much to ask. My bed was my dear friend.

I share all of this today because I might be the least possible person you'd imagine thought this way.

I seem put together from the outside.

There are pretty pictures on my website. And lots of accomplishments next to my name. There are people who care about what I think on topics of importance.

But, I too have struggled with the demons of depression which have told me that my life simply didn't matter.

And I am not alone.

Statistics tell us not only that suicide rates in the US are on the rise by 25% since 1999 and that in 2016 alone 45,000 lives were lost to suicide but that 10 million Americans think about killing themselves each year.

And though I am no longer in this place in my life (thanks be to God!), right now, our churches are full of these folks.

So do your neighborhood a favor this weekend if you attend worship, chat it up with whoever you're sitting beside.

Find out something new about them that you didn't know.

Invite someone over for dinner.

Talk with your faith leaders about not only what they're doing to support suicide prevention, but what their plans are for community building in the upcoming year.

Life is really hard and we have to learn to talk about it together.