A Sermon Preached at Farmdale Baptist Church, Sylvania, GA from Acts 2:1-21 with Genesis 11:1-9 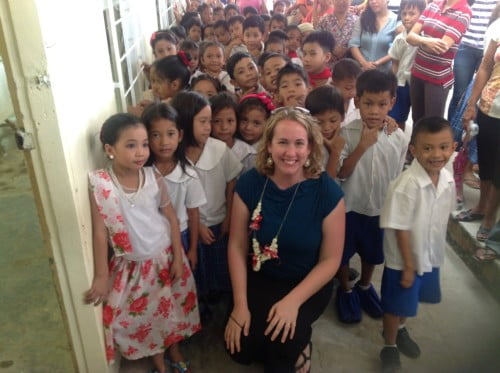 Have you ever been in a situation where not everyone spoke English? Where you found yourself unable to understand somebody?

I have more times than I can count.

Over the past three years that Kevin has served as the President of Feed the Children, I think the story of our lives could be summed up in one word. Traveling. I think every time we call Kevin's parents or my parents the first question they ask us is, “Where in the world are you?” (And we often given them a different answer!)

On these trips, experiences no matter where we are in the world are similar. As we have approached a community in need where Feed the Children has a school or a water project or a health clinic, we’ve met with parents and kids. We’ve done what we can to encourage children, parents and staff. It’s all great. But then we’ve usually had this one BIG problem. We speak English. But others don’t.

So when we sit down for lunch, we often don’t know what we’re ordering on a menu (unless we get help). We don’t know what others are saying around the table (we just hope they’re saying something nice). And there have been moments when Kevin and I have found ourselves sitting at a big table full of folks, only talking to each other.

And in moments like this, we’ve relied on smiles, handshakes and hand motions--- all geared toward making a point the best we can with our body language. We’ve hoped to not embarss ourselves too much.

And though Kevin learned a lot of German in high school it’s never really helped him much out where we’ve visited.

What we just read from Genesis is an experience of completely different proportions than what I just described to you about our traveling. Those gathered on the earth at this time had never experienced such a problem. They all spoke the same language. They gathered together as one. Could you imagine how lovely that was?

But scripture tells us that those gathered became a little too confident in their unified powers. They believed that “they could make a name for themselves” by building a tower high in the sky with bricks and mortar. They wanted to be the ones completely in control of what came next, not God.

From what we know of God, we can imagine how well this went over . . .

In response, the Lord says, “Come, let us go down and confuse their language so they will not understand each other.”

You see, God said such pride would not do. Their punishment became separation from their human brothers and sisters. No longer would everyone speak the same language. No longer would the whole earth feel like a great big ole family.

So what came next was: folks began separating themselves, scripture tells us, by language.

Colors and skin tones began to divide from one person from another person.

“Where are you from?” became a question folks asked each other.

The world became full of not only different languages, but also different tones of voice and accents that continues to this day.

Ever gone to Mississippi or Boston or Pennsylvania and have a problem understanding what they’re saying?

I have to say that since joining the Hagan family and spending lots of time in South Georgia there are new words and ways of talking about things that I’ve had to learn. I can remember on one of my first visits here when Kevin and I were dating, Rachel (my mother-in-law) asked me what I wanted for dinner. I wonder why she was so concerned about dinner at 11 am in the morning. But later I got the translation dinner = lunch (as I understood it). Oh, it all became clear!

This one small example shows that even if our official language is English, there are still a thousand ways we can say the same things. It’s so easy for us to not understand one another.

But was this the way that God intended for us to live—not understanding each other and all speaking different languages?

I don’t think it was.

Only a few short weeks ago it was Easter. It was day we celebrated the message of NEWNESS that Christ brings.

So if all of this is true, then, Easter, would give us a WHOLE new way of speaking to one another, right? The separation that the Tower of Babel brought us would be no more!

Our New Testament lesson from Acts 2 has a lot to change the tone of the story in wake of all that Easter meant for the world.

And as we just heard read, the day started out pretty normal other than the fact it was a festival on the Jewish calendar and everyone was gathered in Jerusalem for worship and celebration.

It meant the disciples of Jesus, in particular were all together. They were still trying to figure out what to do with their lives, what would be the next steps for them in this post Jesus world. But then, verse 2 of Acts 2 tells us that, “Suddenly a sound like the blowing of violent wind came from heaven and filled the whole house where they were sitting.”

What could this sound be?

I could imagine the disciples were frightened. For: “They saw what seemed to be tongues of fire that separated and came to rest on each of them.”

And though we in the church world can easily get caught up in verses like this when we hear that the disciples: “began to speak in other tongues (or languages) as the Spirit enabled them” wondering, “What is tongues?”

Through the Spirit people heard one another in ways in which they never had before!

About two years ago, Kevin and I made our first trip to Guatemala with Feed the Children. It was a beautiful country and we loved the all the kids we met. But, as the week came to an end, I was notably aware of the language divide. The official language in Guatemala is Spanish. But not everyone in Guatemala speaks Spanish. And few speak English especially in rural areas where we work.

Many of the communities that we visited were full of residents of Mayan decent (many of whom live on less than $1 US dollar day, by the way and have not completed a grade school education). Thus, at each stop of our trip, the mothers and children spoke a different dialect of a tribal language. Not even the Guatemalan staff could understand what the mothers said. 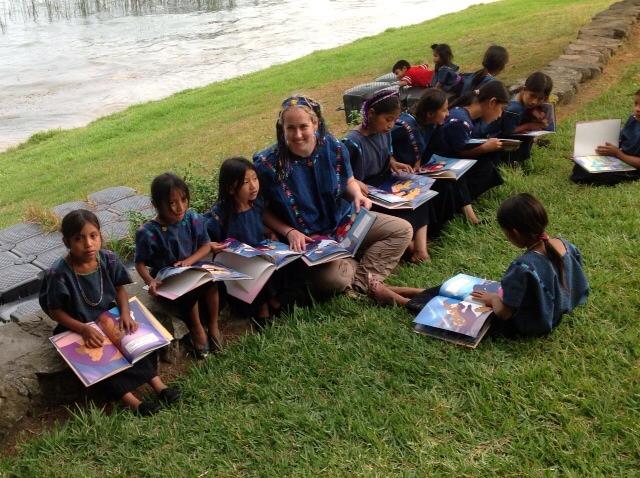 Together we relied on the Mayan children who’d learned Spanish in school to translate their tribal language into Spanish. Then the Feed the Children staff that spoke Spanish and English translated for Kevin and I. While it was good to be among these beautiful and hospitable people, the communication was exhausting. Double translation as you might imagine took a lot of time to just get a simple question answered like, "Where does your family live?"

But, when it came time to say goodbye at the airport to the directors of the program, non-English speakers themselves, but leaders full of kind hearts and deep love for the children of their nation, I found tears rolling down my cheeks.

Though we’d never spoken directly from native language to native language, I knew these the hearts of these two. I knew they loved God and sought to serve the Lord in all they did. They loved and appreciated me and wanted me to know how happy they were to have my visit to their country. I felt the same about them.

Together we stood on holy ground.

And the frustrations of communication that we’d experienced that week seemed to pale in comparison to the hugs we exchanged and the smiles that beamed across all our faces. It has been good to be together in partnership and we all knew it. God had done a work among us—a work that was changing and is changing children’s lives in Guatemala forever!

Such was a moment of the Spirit transcending, resting upon us, and intercessing for us if I’ve ever experienced one.

It was a place for me, like the day of Pentecost was for those first disciples where heaven and earth met.

And this, my friends, is what it means to be Easter people who live by the spirit. Together, with Jesus’ help, we are creating a new world where we don’t have to be so separate from other people-- especially people who seem so different from us on the outset.

This new world is a world where the words I speak do not keep me from you, but can join us together . . .

A world where it matters not where you and I came from, but only how open we are to the future God has in store for us . . .

A world where the color of my skin does not make me better than or less than, but merely a beautiful part of God’s brilliant mosaic of lots of colors . . . 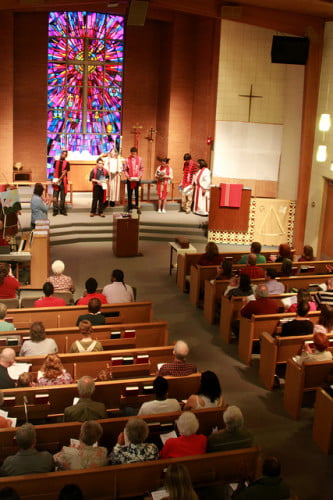 Many people called the day of Pentecost the birthday of the church. Or in some churches a good excuse to have a cake and sing happy birthday after worship . . . I like the idea of making a big fuss about a day like today because our birthday is all about this: in the church, we are a different kind of people. We’re not like a flower club or a Rotary meeting or a mom’s play group.

We’re the church because of the Spirit of God has gathered us and lives in us, and helps us. And this changes EVERYTHING about our coming together.

I want to ask you this: when is the last time you sat in a deacon’s meeting or Sunday School class and thought to yourself, how in the world do I go to church with these people? These people.

I bet all of us could relate.

Church, at least how Jesus taught us to do it, is a crazy thing.

People of all kinds of backgrounds and cultures and ages and opinions and education levels and life experiences can gather with one goal. The Spirit keeps us together, even with there are a thousand reasons to tear us a part or to split.

And if you’ve been around church for any length of time, you know what I mean.

Just because we are Christians, it doesn't mean that we are always going to agree.

We’re going to go through seasons when we don’t get along.

We are going to even fight with our words from time to time (and hopefully not with our hands!)

We may want to walk away from church business meetings sometimes and throw up our hands and say, “What’s the point?”

Lauren F. Winner, one of my professors and classmates from seminary said this, “The Spirit is the reason we can build a church and have confidence that we will get it at least a little bit right.”

God has good things and a bright future in store for this church—if only we keep listening to the Spirit of God.