On the day of the announcement that Kevin would soon become the CEO of Feed the Children, a reporter asked him "You are not going to do any more of those commercials with African children starving with flies on their faces are you?" Looking a little taken aback by the directness of the question, Kevin replied: "No I don't think so" to which I as an onlooker smiled. Emotional manipulation-- my perception of such ads-- is not something I am a fan of and I am glad my husband wasn't either.

Fast forward three months: a work trip was planned for Kevin to see the field sites of what Feed the Children is up to for the first time overseas. I tagged along for the journey. Having already been to Africa twice, I wanted to see Kevin in this kind of environment-- a environment that had helped to shape my becoming as a young adult. Boarding our plane in DC on Sunday for Malawi by way of Ethiopia, I was game for anything. But had no idea what this adventure would entail.

Once we arrived and had a night to get some rest, we rose early on Wednesday morning to make a visit to a village where Feed the Children leads the way in making transformational change. Most of the inhabitants of the community are substance farmers who if they were lucky grew enough sweet potatoes, maize or tobacco to sell with some or any profits.

As we visited with crowds gathered to welcome us, we soon learned about how the great partnership between Feed the Children and Nu Skin helps to feed children at the most critical stages of development (ages 2-5years) with a supplemented porridge called Vitameal. We watched the distribution of the meal as the trained mothers from within the community gave it to all the children in the early learning program (over 70 of them) as they gathered under a temporary shelter made of straw.

I saw faces of smiling kids eating porridge that I knew was saving their lives.

I saw fathers full of hope for their children's future because how well they were eating prior to what it had been before the coming of Feed the Children to their village.

I saw mothers, young children themselves, openly nursing their babies with contentment.

I felt welcomed into this village straight out of a National Geographic photo shoot as we were given a tour of the other initiatives Feed the Children has brought to the community including health and sanitation education, clean water, and a village savings and loan for business development.

Later in the afternoon, we visited a preschool for kids with disabilities and the malnourished where Feed the Children provides Vitameal. This was one of Lilongwe's poorest districts whose centers are thriving based on the kindness of private donations from well wishers.

I saw teachers making the best of their inadequate resources as they sought to inspire kids with catchy songs with shapes and colors in them.

Over the course of the afternoon, along with the rest of the group (6 of us in all), I spent time with these kids and then got to feed some of them their porridge as part of their pre-home ritual.

In reflection later of the day, I realized how naive my resistance to "starving children in Africa with flies on their faces" truly was. It is in fact real. I met these kids. I held these kids. And though Feed the Children is doing great work, there is still so much more to do. And there are even children involved in their sites that have a long way to go in terms of actually being healthy and their parents being able to take care of them without a complete dependence on the Vitameal.

Yes, we have kids in need in our country. There is hunger everywhere. But for this week, I am glad I got to experience both the joys and the deep challenges of the faces of poverty in Africa.

Though I may still roll my eyes at the sappy commercials as they play on late night TV, after my trip this week I will give testimony that childhood hunger is real. It's a cause that needs more advocates, more funding and more compassionate laborers to attend to the work. 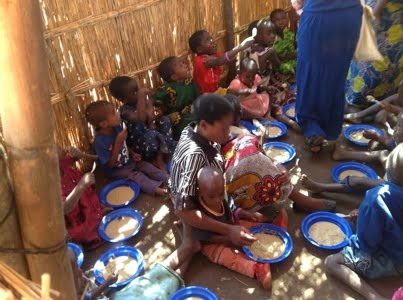 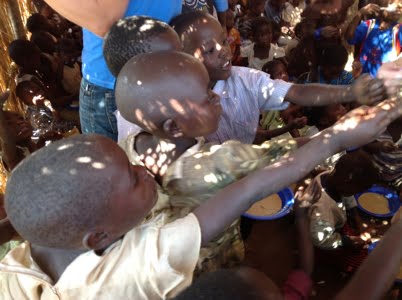 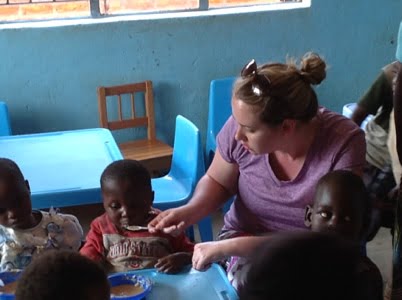