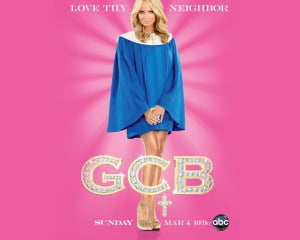 There are some moments of your life that you simply waste. Minus having this blog to write, I could say this about my television viewing experience last night watching the pilot episode of the ABC drama, "GCB."

It's a satirical drama set in the city of Dallas, TX well set within themes of southern culture and religion. Fellow blogger and colleague, Alan Rudnick, wrote a great summary post about its plot and what the title GCB actually stands for. I would suggest that you check out his blog.

Of course being interested in all things religious and also a native of the South, I agreed to watch GCB via request of my husband, Kevin. Kevin loves being in the know about new television shows and movies and couldn't wait to check GCB out. I didn't think I was going to like it, but with my supportive, "I want to spend time with you" wife hat on, I took it all in.

I only made it through 30 minutes of this one hour show before I was off to do something else. Simply stated: Christians according to GCB are hypocritical, sacrilegious, back-biting and frequently do works of charity out of fear of "not looking the part" among their church friends. It reminded a lot of the feature film from several years ago, Saved (which I can only watch in small chunks).

Alan, in his post talks about how many Christians will have a problem with GCB because of the language and the behavior and the type of Christian culture it portrays (I can't imagine how much hate mail ABC executives are getting right now from right wingers). Alan takes a positive stance and suggests that the presence of a show like GCB on the air is a chance for Christians "to laugh through satire when Christians miss the mark." And, I guess if you don't laugh, you cry, so laughing might be a good exhortation here!

And while, yes I am a fan of satire and not taking one's self too seriously (appropriate uses of humor are always good, I'm with you Alan on this one), I have to say that I was saddened by GCB because I felt so much of the show IS TRUE. In my imagination, I can easily see such characters not as fictional but as real people who can be found in the upper to middle class sections of Dallas as well as other places across the Bible Belt. While the entire South is not ultra conservative, white, evangelical, and closed-minded-- many residents within seem to still live in a cultural bubble. And, their churches and their church leaders to which they cling for council seem to give them permission to isolate themselves as they wish.

The South is a place where one's religion or lack their of is tied to one's identity. A typical church gathering, in many settings can contain a person quoting scripture in one breath and lying, cheating or gossiping in the next. Consider this personal example: I attended a Baptist college in Birmingham, AL and a typical Sunday morning for most students at Samford University, in my experience, included either a) going to church or b) pretended that they went to church even if they didn't by dressing up to go to brunch at the cafeteria. Unless you wanted to be known as one of the campus heathens, you'd fix your hair, put on nice make-up and your Sunday shoes for lunch on Sunday-- no matter where you spent your morning. I called the whole thing "plastic Christianity." It was gross.

It's not that I don't believe that Christians don't miss the mark and that we shouldn't laugh at ourselves. (I miss the mark and find reasons to laugh at myself almost every day!).And I don't want to come across as a hater of the South, because I'm not. I look forward to visiting family and friends in the South and enjoying its unique charms when I can. But, what concerns me most is the land of denial that we live in as people of faith when we see shows like GCB and don't recognize the deeper problems in American society as we've unashamedly wed religion, culture and politics. And, I grieve the lack of clergy leadership among my colleagues in NOT calling our "church culture" problems into the light.

This is what I know about faith:

Faith has always been about a real relationship with God in the day in and day out moments of our lives: not a relationship we get from just showing up on Sunday at services.

Faith has always been about actions that bring forth our inner convictions to world (read the book of James lately?) Faith without works is dead, after all.

Faith has always been about being in the world but not being of the world, so that people know we are Christians not by our hypocrisy but our love. Saying when we make mistakes, "I was wrong" but not making tv shows about how crazy we are. Why? Because we are aiming for a higher standard of discipleship.

Living out a life of faith is hard enough without filling my brain space with images of the type of Christians that irritate me the most. Chilling out by watching tv can be a relaxing way to spend an evening, but not when the show hits too close to home no matter how many good actors and actresses are in it. All I know is that GCB is not for me. (Rant over).