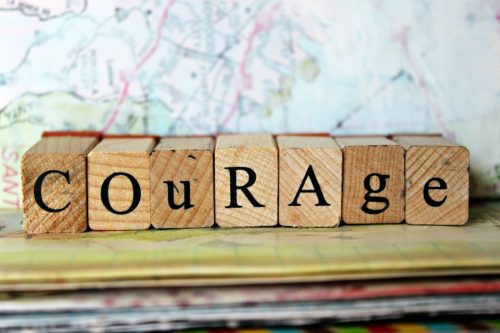 Do you have the courage to show up to hard conversations?

It’s no secret that courage is in high demand in these times we’re living in.

In our polarized everything culture right now, it’s so easy to un-follow our social media “friends” who don’t believe as we do. It’s easy to worship, work and play only with those in our thought camp. It’s easy to turn off the news or ignore today’s headlines so to forget the reality.

But, last Thursday night, I witnessed two brave public leaders with courage to face each other. They took the harder way showing up a very public arena. They sat on a stage before 2,500 persons in the pews of The Riverside Church in New York City. With what intent? Direct words about race, vulnerability, trauma and politics. And to meet each other face to face for the first time after a twitter conversation in August 2016 that began with these words by DeRay McKesson, a popular young black lives matter activist and curator of the podcast, Pod Save the People.

“Some people live to see other people fail and that’s sad. I’ve noticed that some people #onhere are just so negative. Find some joy folks.”

The conversation sparked so much interest and attention that The Riverside Church— a place known for birthing words that matter– facilitated the meet-up.

I found myself on the third row for the 90 minute event that became a 2 hour one (that could have kept going). Brene pushed back the latest findings in sociological research. DeRay pushed back on white privilege.

I’m still thinking about lots of things they said (as any good conversation invites you to do) but for today I’m wondering . . .  to forge a new path of engaging folks we wouldn’t normally talk to, what must we have?

First, willingness to come to the table

There’s a sign outside my gym that says, “Showing up is half the battle” and I couldn’t believe it more. Isn’t getting to the gym so hard sometimes? Things that bring discomfort aren’t usually our favorite activities.

Yet, in spite of the expected discomfort, Brene and Deray opened themselves up to this hard work. Let’s remember, they didn’t have engage in a twitter conversation. They didn’t have to show up at the event. But they did. And they kept talking on the stage long after the public conversation ended. It wasn’t a staged photo-op for either of them but something very real.

One of my favorite moments of the night was when DeRay spoke of how combatting privilege means being aware of how much space white folks take up in conversations (like Brene was taking up in this one unaware).  White people, DeRay said are used to being heard. It’s a new starting place to enter a room as a white person aware of those who aren’t.

DeRay went on to challenge church folks with this zinger: “Whiteness can be so strong in many congregations that it overcomes belief in God. Whiteness wins over God.”

Another gift of this event was how Brene modeled the gift silent pauses. A dear friend of mine and I joke all the time about our love of “the phone pause.”

It’s a practice to not rush to the next thing. It’s space in conversations to think intentionally. It’s the intention of valuing words for the healing or hurt they can cause.

Throughout the event, it was as if you could see the words falling between the two conversation partners as they talked and paused. The words found home deeper into them. The words opened up doors to new beginnings. The words brought life.

I want more life-giving exchanges of words in my life. Don’t you? The question I can’t get off my mind is this week is: how am I going to start a courageous conversation?