I can remember the first-time church going to church troubled me. It was the Sunday before Thanksgiving, 2002. I was set to graduate college in a few short weeks. I was open to visiting a new church with a friend. So, on that morning I drove to the church, I came in, found a pew and sat down moments before the service started. I began turning the pages of the bulletin to see what was happening the service. Then I got to the back cover. I read about the upcoming activities and my eyes glanced to the staff contact section.

And what did I see? Something that felt so appalling, so outrageous, so against my belief system that my arms crossed and my mouth dropped open in utter disbelief. 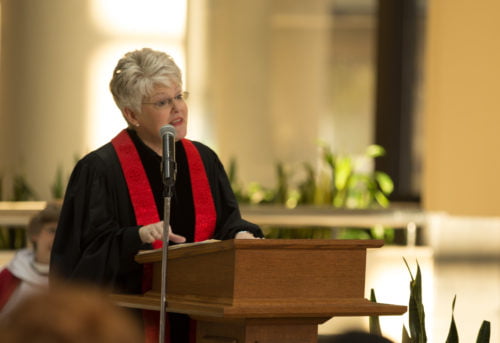 A woman’s name- Sarah was listed as the Senior Minister.

I mumbled under my breath toward my friend in the pews: “I’m not learning anything from this woman today.”

You should laugh with me at the irony of this moment now, but you need to understand that at the time, I’d never seen a woman lead a congregation. And it was a really big deal . . .

For I’d grown up in “women can’t even be ushers, that job was left to the men,” Southern Baptist congregation in Tennessee.

In my church if women wanted to be leaders, they had only a couple of options. They could teach other women or the children or marry pastors. Maybe they could lead the mission committee but not much more.

So, with all this true about my experience, you can just imagine the discomfort that exuded from every part of my body that day . . . the twitching, the rocking back and forth in the pews, the despairing looks that I came in the direction of my friend who brought me to this place! What was she thinking and the service hadn’t even started yet!

But somehow I stayed put and listened to Pastor Sarah’s wonderful sermon. A miracle!

In retrospect, I’m SO glad that church made me uncomfortable that day. It was the beginning of a beautiful new journey.

And likewise, in the John 2:13-25, we read a story that for generations has made readers uncomfortable too.

For it presents us with a view of Jesus that is not the warm and fuzzy. Jesus isn’t comforting some who’s lost a loved one. Or healing the sick. Or even holding children.

Nope, we find Jesus at the temple before Passover begins, making a whip out of cords, driving out the animals, pouring the coins out of the money changers bags and overturning their tables. He’s causing a major scene, challenging everything that was normal about how worship happened in his time.

And we find ourselves uncomfortable because it’s not the kind of behavior we teach to our children.

Jesus isn’t following any of the “you are in public” or “politically correct” rules. And shouldn’t he at least try . . .

And maybe just maybe that was exactly the point.

Here’s what we need to understand: this same story also appears in Matthew, Mark and Luke, but in each of these gospels we find it placed in the context of Jesus’ last week. And it’s an event portrayed as a catalyst leading to Jesus’ death.

Yet, in John’s telling of the Jesus story here we are in chapter 2 reading it already. And commentators help us understand that this is for a very particular reason.

For, John’s gospel is all about making a case for Jesus as the Word made flesh. Jesus is God. And most of all, Jesus is an authority to be taken seriously.

And not just an authority but the authority.

When I was growing up in that church in Tennessee that one where women couldn’t even serve as ushers, this passage was often brought up as an example of why I couldn’t sell wrapping paper for my school drive or Girl Scout cookies after church on Sundays. As much as I wanted to hit up all the church folks we knew, it was often quoted to me by someone Jesus’ words in verse 16 of this passage:

“Take these things out of here! Stop making my Father’s house a marketplace!”

But looking back on it now, I think this common interpretation and the debate in some churches about whether kids or adults can sell things to their church friends misses the point. In fact, I don’t think Jesus was upset, in John’s gospel about the buying and selling of sacrificial animals so that worshippers could fulfill the law. Nope.

He was upset about the hearts of the people. God was in their midst and they didn’t see! 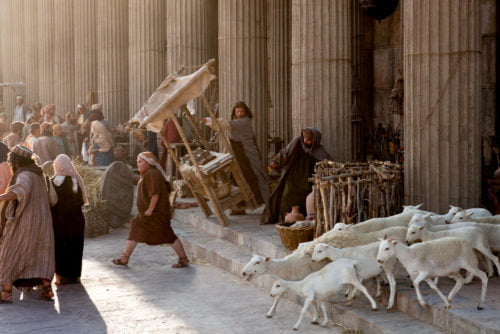 Commentator Karoline Lewis makes it plain:  Jesus “calls for a complete dismantling of the entire system.”

Worship was in fact, being done all wrong because they’d lost sight of who they were worshipping.

Such was a lot to claim, you know and to be serious about.

And Jesus even takes the conversation one step further when the crowd asked him for a sign (which is another way of saying prove yourself, Jesus).

Jesus replies: “Destroy this temple and in three days I will raise it up.”

It was a metaphor of course, a way to talk about the fact that one he, Jesus, God in the flesh would be killed on a cross. But on the third day would rise again. The living temple of God with Us in his body would not be held down by human actions.

The crowd gathered around Jesus replied saying “This temple has been under construction for 46 years, and will you raise it up in 3 days?”

Folks didn’t get it. And the discomfort level rose because:

No one had seen a teacher make such claims to be the Son of the Father before.

No one had seen a teacher make such bold declarations about the temple before.

No one had dared to question the human institution where God’s people gathered to worship.

But it was the embodiment of WHO Jesus WAS. And the work he came to do. To show us a new way to live even if it made us all uncomfortable.

So, this morning, I tell you with 100% clarity: the way of Jesus is the way of discomfort.

For the picture of Jesus, we get in texts like this repeatedly is always a vision of man who shows us a new way to live that challenges us, pushes our buttons. It’s a vision of leaving behind the way that things have always been done. It’s a vision of taking up our cross and following, though the way may be difficult.

In the days since Jesus left the earth, even though we have the Holy Spirit as our guide we can easily get off track. When we do, God often sends us prophets to re-direct our course.

One of those prophets in modern times in America is Rev. Dr. Martin Luther King, Jr. 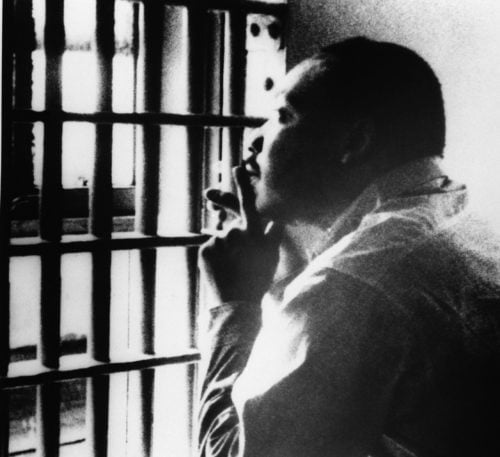 Dr. King was a man who did not set out to be great, to be someone who was remembered with parks and streets and parades named after him. He was just a simple preacher. A married man with children. A trained theologian.

But a man who said yes when the Montgomery Bus Boycott needed a leader, needed someone to speak at its nightly meetings to inspire the protesters to remain strong.

And more and more opportunities came to lead and to serve and to stand up to institutionalized racism through non-violent protests, he listened and went to work.

As Dr. King preached, he pushed the church to be the church.

He pushed the church to live out the Great Commandment to love the Lord your God and to love your neighbor as yourself—meaning all of the neighbors not just the white ones.

He didn’t take no for an answer when it came to injustice in school systems, transportation systems, voting systems, or any systems really. He made a lot of people uncomfortable with the way he talked about Jesus. Especially the white church.

And Dr. King found himself in jail more times than he could have ever imagined.

On one such occasion, a night in Birmingham, AL we know he wrote a letter from prison. In this letter on April 16, 1963, he specifically addressed white clergy—fellow preachers claiming to be bearers of the good news, saying the good news they preached was only for people who looked like them. Dr. King told them it time was now to act, no more excuses.

He spoke the truth with these words: “Injustice anywhere is a threat to justice everywhere. We are caught in an inescapable network of mutuality, tied in a single garment of destiny. Whatever affects one directly, affects all indirectly.”

Though this popular quote is all over the internet this weekend, and its words are so easy to repeat and make us feel good as we say them, I believe the heart of Dr. King’s message was this: a call to action.

And it wasn’t just for Dr. King’s lifetime. It’s our Jesus calling too.

Is there injustice in this world, church? If the answer is yes, then we’ve got work to do.

The authority of Jesus, just as it was presented that day at the temple, leads us on to wake up the sleeping, lift up the silent, champion the forgotten.

The authority of Jesus leads us to speak truth to the powerful, not valuing one person over another because of the position they hold.

The authority of Jesus leads us to call our racism. Call our sexism. Call our homophobia. And discrimination of any kind the basis of creed, religion or ability.

The authority of Jesus asks us stir up discomfort.

Why? Because it is the GOOD NEWS for all of us!

So, are we going to get to work church—not just this weekend, but in all the days ahead? May prayer for all of us is that will be bearers of this good news, relinquishing comfort and allow Christ to be our teacher as we go.

What Are Your Plans for the New Year?
Next Post: An Inauguration Day Prayer for the Heartbroken