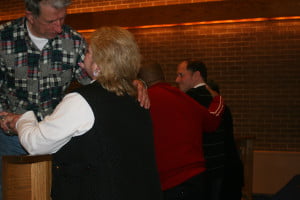 There is a growing movement it seems in progressive to liberal Baptist churches to not engage in the practice of ordination for their lay leaders. I’m not sure where the sentiment comes from other than the idea that the “priesthood of all believers” means it is unfair to set any distinction between members. I also imagine it has something to do with how frustrations that have emerged with the ministry of deacons in many Baptist settings where an overseer role has morphed from what should have been a service and pastoral care ministry all along.

Yet, yesterday at Washington Plaza, we ignored this trend and engaged in something that had never been done before in this congregation. We ordained deacons.

It was a hard sell at first. The committee working to administer this project was very skeptical of the term “ordination.” I think they had visions in their heads of liturgical stoles and robes and theological education required for service. No one had ever explained what ordination might mean in the Baptist tradition. But, when I explained it as a service of prayer and encouragement for the ministry of caring for others, the tone softened. Soon, we were all in agreement that ordaining deacons is something we’d like to do.

Though I was anxiously interested in how such a worship service would turn out, I have to say that my expectations were shattered. It was wonderful even as the service ran over the usual 12/ 12:15 end time (and I didn’t get many complaints if any).

It was a wonderful day in the life of the church because God’s Spirit was present in the congregation in such a tangible way that you would have to be heartless to ignore. Such a Spirit came from the stories of faith that were shared in such authentic ways by the deacon candidates. Though each story of faith was different, a common theme emerged: God’s relentless pursuit of showing love to us. We, as hearers of such sacred stories, couldn’t help but think of our own stories too– what God’s love in our lives had meant to us.

Though the laying on of hands portion of the ordination got a little messy (I didn’t give the best instructions for how to line up), it was a joyous experience unlike anything I’ve seen. Ordination services for pastors or other deacons that I’ve been a part of have always been very somber, serious and reserved. Not that these descriptors are bad (it is a very holy moment afterall), but it seemed yesterday that the joy of the moment was not containable. I saw tears of happiness, hugs, kisses and laughter, yes, even laughter as hands were placed on deacon candidates in prayer. 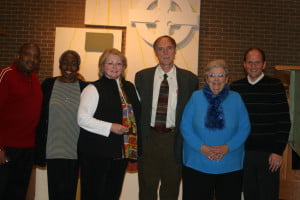 I dare say, it was the best worship service during my entire tenure at Washington Plaza because it was a moment to truly see the spiritual heart of who we are becoming as a community. It was a great way to end this liturgical year in anticipation of how God’s Spirit is going to intersect our worship in even greater ways in the coming year.

We could have skipped this step, of course, just elected the deacons into service just like the other church officers, but then I think we would have missed out on the gift ordination was to the church community and to the spiritual journeys of the deacon candidates themselves.  It was a day to empower those in whom we want to serve among us for the responsibilities of the task at hand.

I asked one deacon candidate after the service how did she feel about the experience; for sharing a spiritual story was not exactly something that this candidate was comfortable doing at first.  And surprisingly, the response was quick. “This was one of the best days of my life.”

All I could say in response was, “I am proud to be your pastor. So very proud.”