When is the last time you got in the car with a group of friends and somebody called, “shotgun?” Do you know what it means?

As my twelve-year-old nephew, Jayce likes to remind me every time we take him out on an outing, “Calling shotgun means you get to sit in the front seat of the car” as he promptly calls it out before his younger brother, Landon.

According to the rules of the official shotgun website (yes, there’s a website for everything these days) “the history of calling "Shotgun" goes back to the days of covered wagons and the Wild West. On a trip across the plains, the driver of a wagon would hold the reins of his horse team and concentrate on driving. This left him and the occupants of his wagon susceptible to sneak attacks from bandits and thieves. To avoid this atrocious circumstance it became necessary for one person to sit next to the driver with a shotgun and fend off the enemy.” 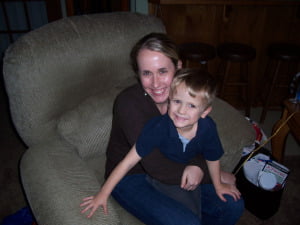 But these days most people I know who call “shotgun” (like my nephew) do so because they like to control the temperature or what type of music blasts from the stereo. In the case of Jayce he always picks anything by Reba McIntire or “The Devil Went Down to Georgia.” (Keeps life interesting for sure!) All in all most kids and teens I know like to play the game of calling “shotgun” because if you win, it’s a position of leadership, of control and most of all one that makes you feel better than the rest of the passengers stuck in the backseat. Or, as Jayce says when he beats Landon (pictured several year ago out to the right) out by seconds, “Na, nah, nah, nah. I won. I beat you!”

There’s just something innate in what it means to be human to want to position ourselves higher than others—to know that we count, to know that we are going to get what we want out of life, to know that above all we are more special than the rest.

Over the course of the past two Sundays, we’ve been sticking close to the gospel lections from the book of Mark as well as our theme verse for the stewardship campaign this year, Micah 6:8. Asking ourselves the question of “What does the Lord require of us? But to do justice, and to love mercy”  . . . and today to arrive at the final part “and to walk humbly with our God.”

And with all of this true, it seems quite significant that we’ve landed this morning at the exhortation of “walking humbly with God.” For it’s a big thing to do to pledge—to make the step of faith to say—I’m going to give of myself in this way to the work of the Lord in this place in the coming year.

In fact, it’s a grown up, mature faith statement of humility. It’s a statement that says, I am not going to put my family, my needs and my friends above God. I’m not going to make any plans for my finances until I give what is God’s first. And even before 2013 starts I’m going to say in the presence of this congregation and most importantly God, I’m going to acknowledge God’s Lordship over my life, my finances included. (Not just to make my income taxes come out nicely in the end, but because I acknowledge the Lordship of Christ in all things).

Yet, as we know from how the children in our lives, walking humbly before God is much more difficult than it first may seem, especially if we are talking about money and all the attributes that go into making our money like power, position and achievement.  We, as adults, are not known to give up our control on such too easily.

In Mark 10, we find a story of two disciples who also were learning that “walking humbly with God” was going to be they weren’t really the ones calling the shots in the first place.

This is the scene: Jesus and his disciples were on the road heading toward Jerusalem, for the Passover celebration. It would be Jesus’ last journey there. I can imagine his nerves. But, to the clueless disciples—their mind was on something altogether different—who was the greatest. 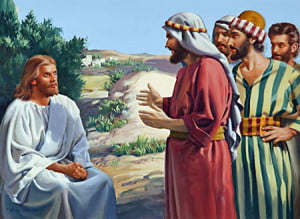 When I first began studying this passage in preparation for today, the first word I wrote on the sheet of paper where I took notes was, “boldness” in all caps. For, I give them credit for gutsy right away in verse 35. For, I don’t know if I could approach Jesus as they did when they said: “Teacher, we want you to do for us whatever we ask of you. And [Jesus] said to them, ‘What is it that you want me to do for you?’ And they said, ‘Grant us to sit, one at your right hand and one at your left, in your glory.’”

Basically, James and John wanted to play a game of grown-up calling shotgun “when we get to heaven” style.

“Hey Jesus, we’re calling it first. When we get up there in all your majesty when all is said and done, we want to be next to you in the best seats.”

And of course, since they were the first ones to ask out of the twelve AND Jesus had already said that he’d entertain whatever they wanted from him, I can imagine that James and John thought they were automatically in for making the “who’s who of heaven A team.” They were going to get to sit on the right and on the left.

It’s the way things in the world, work right? You go chase your ambitions. You ask for whatever you want. And in the end, hard work pays off to those who don’t give up! “If you want something, go out and MAKE it happen” is what all of the self-help experts say.  It’s the modern American dream in fact. We know this story full well.  Maybe some of us are living this story right now.

Well, Jesus would have nothing of it.

Why? Because the kingdom in which Jesus was seeking to usher into this world was not about who was on top and who was not, but ultimately about the walk with God, a journey both of high peaks but also of suffering too.

Get this: it’s almost as if James and John were sleeping through the previous conversations the disciples and Jesus had shared about who Jesus was and what was to become of his future. For Jesus had JUST told them that the Son of Man would soon suffer and face death.  Jesus’ hardest days were ahead of him with every step he took closer to Jerusalem. So, in fact, if James and John HAD really been listening maybe they would not have called shotgun so quickly on this one—

Hear Jesus speaking this to them in verse 38: “You do not know what you are asking. Are you able to drink the cup that I drink, or be baptized with the baptism I am baptized with?”

Well, nope would be a proper answer because as we know from the rest of the story, they can’t stick with Jesus through the long night of his arrest, trial and day of crucifixion.

But at this time, bold little James and John think they can. And in saying, “We are able” to Jesus’ proposition, proceed to make the rest of the crew jealous and break out into quarreling.

No one want to be the disciple sitting in the last chair at the end of the table, do they?

But, as Jesus uses this moment for teachable purposes we learn that Jesus doesn’t really care at all about rank or promises made to him. No, not at all; rather, he says, following me boils down to this:

We could get easily side tracked here with the insertion of the word “ransom” into this theological statement about what Jesus would soon be doing for us on the cross and all the atonement theories that have followed through the centuries of the Christian church. But, we’ll save that conversation for another day and simply point out this: following Jesus means putting the ranking games we play with one another away.

St. Augustine told a wise and wonderful story to a man who confronted him about the logic of heaven. “Why doesn’t God make me a rich man? I’ve prayed for money again and again and God doesn’t answer my prayers.” St. Augustine asked him what he would do if he became a rich man. The man replied, “I would have land and I would have people work for me for a change. I would be in charge.”

“And what’s your life like as a poor man?” asked St. Augustine.

“I have my family. I have my friends. We all work hard together. But we’re all poor.”

“Well, I can see why God has answered your prayers with such profound wisdom,” said St. Augustine.

“God hasn’t answered my prayers at all. I’m still a poor man.”

“Not at all. You’re a very rich man. God has simply not given you gold. But by denying you gold, he has prevented you from becoming greedy, abusive, and arrogant. Why would God give you something that would help you to harm the people you love? By withholding gold – and only gold – God has allowed you to be rich of spirit. You are kind, generous, loving and loved.”

The man stared at St. Augustine, then collapsed in tears.

And in the same way, we too might need to re-consider our ideas about power and control of our lives. For you and I can play the games as long as we like, trying to use our resources to get ahead of our brothers and sisters, to stand out, to be noticed for having more, being more, and excelling more for being the bold ones who go out there and actually achieve our dreams. BUT, Jesus says to each and every one of us, the only way we’re ever going to find the fulfillment that we are all seeking is if we walk humbly with the Lord.

But, I don’t think this was what Jesus was telling us at all as he encouraged servanthood.  As one Biblical commentator says, “being a servant and a slave [as Jesus talks about in this context] is not about subservience to Jesus, but about joining him.”

The invitation, you see, to walk humbly before God, is one where we get to come learn of our Lord’s business, a trusted companion for the journey. So, James and John had one thing right—there would be an invitation to come and sit beside Jesus for the rest of their days and the eternal life to come. But the difference would be that everyone else would be there right beside them.

This too is our invitation today as we prepare to bring our pledges for the next year to God. We pledge because we too understand that walking humbly with God is about doing our part, no more, no less so that others may join us in this experience of church. We pledge because we believe in giving to God at this church is an act of justice, is a way we love mercy and is how we humbly walk with our Creator.

So, this morning, I challenge you to do what you can do. And in just a few moments as we bring our pledges forward to do so in a spirit of humility. Not with your head bowed.  Not with fear or anxiety. But with confidence that can only come from following in the next step of your discipleship journey—here in this place.

Let us give to the Lord this, walking humbly together.