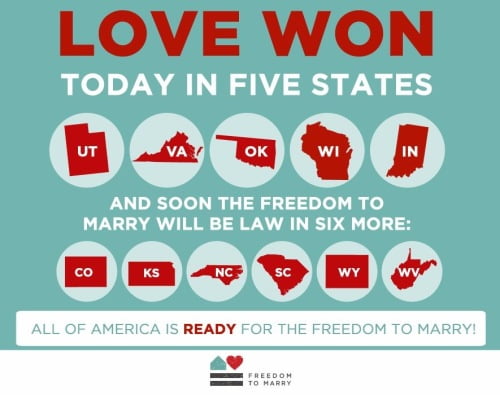 It's been a big couple of weeks in the movement of marriage equality in the United States. These are the times we're living in:

As a person who believes in the right of all people to marry whomever they choose, I'm excited about all of this progress. I want to tell you why.

Not to give you a Biblical exegesis of the issue. (If you want one check out: Matthew Vines or this video documentary that makes me cry every time I watch it).  But to tell you my own story.

Growing up in the Southern Baptist Church in Tennessee-- the leadership of the church was ALL about the men.

Men are told to be the spiritual leaders of the home.

Never do you see a woman taking up the offering or being asked to lead the closing prayer or even teaching under the block of the service called "the sermon."

But what happens when you grow up and feel called to do exactly the opposite?

What if people tell you as a teenager, "Well, if you were a young man, I'd tell you to be a preacher."

What if you ARE a leader, a proclaimer, and someone who wants to discern life in conversation with your partner?

What then? I guess there are many different paths but for many it looks like this:

You must leave your "home church" and the approval of the sweet little old women who gave you peppermints from their purse every Sunday.

You must leave your "favorite" status at family gatherings when everybody talks about what they do.

While it sounds fun and revolutionary maybe-- from the outside looking it-- to actually do it can be one of the hardest things you ever do in your young adult life.

It was for me.

It takes more courage than you ever thought you had. And most of all, it takes sticking closer to the message of Jesus "to love the Lord with all your heart, with all your soul, with all your mind and love your neighbor as yourself" more than you thought was possible.

But you do it, no matter what. You do it because you know you have to. You chose to save your own soul because in the end, it's all you can really save anyway!

Brene Brown writes this about such a process in her book The Gifts of Imperfection: “Choosing authenticity is not an easy choice. Staying real is one of the most courageous battles that we’ll ever fight.”

But, you know what made it better? Community. New friends and colleagues saying more  "You can" vs. "You can't."  New denominational homes like this one and this one too. And a seminary that warningly embraces you and your call to preach too.

And in return, I want to include. I want to advocate for voices that get shoved to the margins. I want to also look people in the eye when it comes to marriage and say, "Yes, you can. I will marry you."

So here I stand waving my marriage equality flag for all that is and is to come! Both for the movement of women in leadership in the church and inclusion of all our gay and lesbian brothers and sisters. We're all God's children after all.

If there ever was a week to write the blog I posted on Tuesday, it was this week. For more supporting documents to my argument have hit the news circuit on the Associated Baptist Press this Wednesday, read this post written about Al Molher.  Al Molher, a Southern Baptist fundamentalist says that Christians aren't Christians unless they believe in the virgin birth, a point he's stuck by since first posting a blog about this in 2006.

It's not the content of this article that worries me;  for Al and I don't exactly run in the same circles or share much in common . . .

But, that Al's latest version of a religious litmus test is even news!

That anyone is listening to a guy like this after all the hateful things he has said over the years about people like me who are simply following the call of God to serve the church is truly disheartening.

I am not a priest after all. (And, Al Molher is not the Baptist pope). I am a Baptist pastor who believes in the priesthood of all believers (which I'm thinking that Al doesn't seem to care about anymore).

When are we going to stop this madness, especially in the Baptist church were each of us are a part of autonomous local congregations? I can respect if Al wants to tell his church that they aren't Christians if they don't believe in the virgin birth (and of course it is their choice to believe it), but please don't try to speak a word to mine.

We've got bigger problems after all. Children going to bed hungry. Uprisings in the Middle East. Families without jobs.  Let's put the religious litmus tests aside and focus on what can truly make a difference in people's lives this Christmas, the love of the child who was born to guide us all, Al and me both.