When we think of Easter the words, “an average ordinary day” do not come to mind, do they?

Nope, we think of new clothes. We think of bunnies. We think of chocolates in the shape of a crosses (which of course gives us less guilt in eating them). We think of big, bright and bold worship services with more people in the pews than normal And we think of that great revelation at that empty tomb! 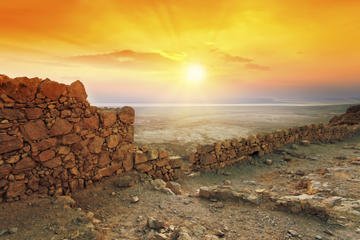 But the truth be told, the first Easter morning began as “an average ordinary day.” It was a day for those closest to Jesus filled with grief, yes, but also going through the motions of what was required of them according to Jewish customs.

Several of the female disciples gather at Jesus’ tomb. They bring with them spices they’d personally gathered. They want to anoint Jesus’ body and further complete the burial process—a sign of devotion and respect. This was their last chance to do anything for Jesus in bodily form.

It’s the ancient version of the “pick out a nice suit,” “buy a pretty casket” and “make sure you have the nicest plot in the cemetery.” We, like the women that day, do these tasks when someone dies not because we enjoy them but because it’s some of the last strings of connection to our loved one. It’s an ordinary part of what it means to lay someone to rest.

And for the women who loved Jesus the most, I can imagine with tears rolling down their cheeks, they wanted this morning to be a special one—the last encounter, their last memories with their favorite teacher.

Then, the greatest surprise happens.

Luke tells us that when the women arrived at the tomb, the stone was rolled away and the body was not there.

Panic, fear, and anger must have been running through the veins of Mary Magdalene, Joanna, Mary the Mother of James and the others.

Who could have taken Jesus’ body?

Where was he now?

And why would someone be so cruel?

We might wonder: shouldn’t they know exactly what was going on? But there was no time for more thinking because before seconds passed, scripture tells us that “suddenly two men in dazzling clothes stood beside them.” 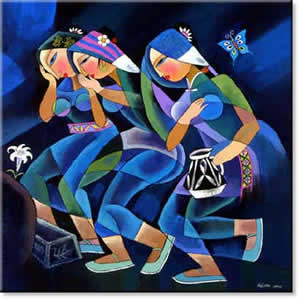 Instinctively, Mary, Mary and Joanna bow to the ground and cover their faces, believing this was the most proper response. But still unsure what was going on.

The angel messengers had something to offer:

“Why do you look for the living among the dead? He is not here but has risen.”

It took the angel’s further explanation—reminding them of all Jesus had taught and all he’d said, point by point for them to begin to understand.

Or, “Women, wake up! The best news you could ever imagine is HERE!”

Then, thoughts in Mary, Mary and Joanna’s minds start rolling. For in fact, they DO remember Jesus’ words. He’d had so much to say about death not defeating him. And so what were they waiting for? This is news worth sharing. Luke tells us that they leave the tomb and go and tell the 12 male disciples.

However, I want to stop here and point out one important word that we don’t hear within this encounter: believe.

We hear nothing of the women believing what they angel told them, only that they’re REPORTING to the others what they heard. (There is a HUGE difference between those two).

(You can tell someone you love them. But if you don’t say it with conviction from belief, what good are your words?)

Yet, kudos to the women of course for keeping the story going—for telling the others was an important next step.

BUT (and but seems to be the favorite words of Luke’s telling of this story, he uses it 6 times in only 12 verses!), when the men heard, scripture tells us that “these words seemed to them an idle tale.”

One commentary says that the translation “idle tale” is a generous one for it comes from the Greek word, leros which could be better translated as “delirious.”

This news of resurrection, according to them was delirious, stupid or just plain crazy.

Only a fool would believe that Jesus is alive!

Of course, there’s Peter, who needs some time to get all of this straight. Luke gives us another BUT saying that Peter runs back to the tomb to see the stone rolled away for himself. He’s amazed yet there’s no mention of belief either.

So this is what I have to offer you about the scripture from Luke 24:

On that resurrection morning, Jesus was not there. Jesus was risen. It was the best news. And no one believed it!

Sit with that for a moment.

It was the best news that no one believed.

Really. And oh how we all have our two cents to offer about that.  We might want to say: “Shame on them!”

But does it really surprise us that no one magically “got” the good news and joyfully proclaimed it?

Doesn’t resurrection—if we truly believe it—require us to leap from completely from what we know into the land of the Great Mystery?

Doesn’t resurrection ask us to change—when we experience it—in more profound ways than we ever thought possible?

Consider this, throughout history, until several centuries ago, there was a fact that just about everybody on this planet could agree on. Can you guess what it is?

No one could leave planet Earth and survive. The earth is for us. The heavens are for the stars. Stay put! 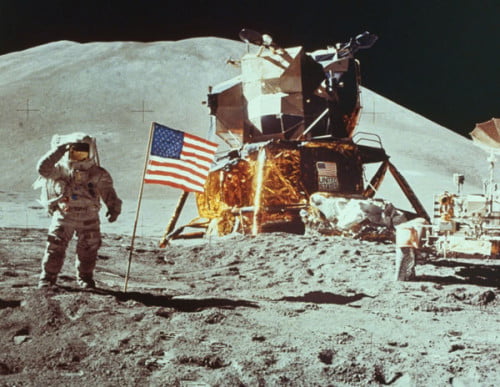 However, as the space age of the 1960s began to buzz with excitement and furor—all of this thinking slowly began to shift. As the Soviet Union successfully propelled the first man up into space, he lived and came back, then, well maybe everything we’ve clung to for the possibilities for our lives was wrong? Maybe the heavens were not just for the planets, the moons and the stars, but safe for us too?

An ordinary day turned extraordinary on July 20, 1969—day that millions of Americans and countless others around the world too were glued to their television screens to watch. Neil Armstrong step foot for the first time onto the lunar surface saying (and you all know it) “One small step for man, one giant leap for mankind.”

Though previously a seemingly improbable, impossible, laughable event, it happens.

The moon in the night sky hasn’t looked the same since!

But, this is what made me curious this week: did seeing this event come true shift the paradigm of “we belong right here” vs “we belong out there” in space? Did flocks of people start to beat down NASA’s doors after that wanting to go to space?

According to a recent Gallop poll, a large group of Americans were asked: “Are you interested in going to the moon if you could?”

Only 27% said yes, which is roughly one fourth of all Americans. I’ll say it again, only 27% of the population they had any interest in space—even seeing it being done again and again and even with 40+ years of even better technology in place to make the journey safer.

Nope! Nobody wanted to go!

The stat could be summed up by this statement: we’re comfortable right here where we are!

And furthermore, isn’t it true that there are countless documentaries played on the science channels in the year 2016 which tell us the man on the moon is all a hoax? It was simply a made up story for political purposes? There are so people who STILL don’t believe it happened in the first place.

And such IS where we land with our resurrection story with those first disciples. The resurrection asked for a complete life re-orientation. And that’s tough stuff. And many still don’t believe.

Yet, consider again what the angels say to the women.

They ask: “Why do you look for the living among the dead?”

Or in other words WHY are you staying here? Jesus is not here. The past is through. It’s finished.

If you want to keep following Jesus, the angels are saying, YOU CAN’T STAY PUT and You can’t be over here!

You can’t live in the past.

You can’t be defined by what was.

You have to lift up your eyes, oh disciples, toward what is to come. You’ve got to be on the move!

I want you to know I understand embodying resurrection IS hard work. Many of us don’t want to be on a journey like that. It’s so difficult! We like it just fine over here, where we’ve always been.

A preacher friend of mine, Anna Carter Florence said once about this, text,

“If the dead don’t stay dead what can you count on?”

For if something is going to be dead (and of course we don’t like that) at least we get the consultation prize is knowing what we know, right? There’s a comfort in the finality of death, isn’t there? It’s something we can lean on. KNOWLEDGE

But this is the message of Easter, my friends, we can no longer lean on what we know.

But you might say, preacher, “If I don’t get what I know, then what do I have?”

I’ll tell you, what you have, you have Jesus.

The resurrection gives us Jesus.

It’s the best news we could ever experience called resurrection!

But hear me say, the ask of resurrection is NOT to check our brains at the door. But it is to allow God and what God offered us through Jesus to be the center of our story.

And though there are many who might call our faith a scam. Or a hoax. Or just a delirious tale.

And though we not not believe. Or want to believe.  This does not change the fact that resurrection morning was the best news the world ever got.

That what we see is not all there is.That we don’t have to be defined by the failures of our past.

And most of all that our faith is one of surprises.

For when we least expect it, for when we’re clueless and not even paying attention on an ordinary day—new life can find us. It did to those women at the tomb! This is such good news. Such good news for today and every Sunday of the year.

Today, church, let the resurrection not be the best news news none of us believed!