Yesterday I preached on I Samuel 15:34-16:13, and though I thought I would be writing a sermon about God’s unlikely choices this ended up being a sermon about grief. Surprised me for sure! I just couldn’t seem to get the “How long will you grief for Saul?” verse out of my mind as I prepared. So, I just went with it and here’s a portion of it: 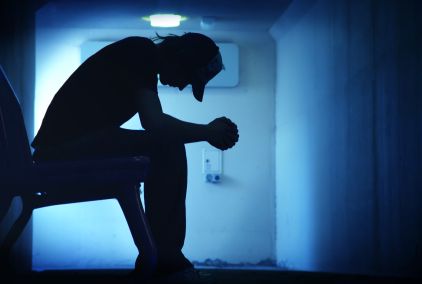 When is the last time you truly grieved over something? I mean a good long cry, a into the night cry, into the next day cry that you thought that you never would get over?

I remember the spring when my grandmother died. Gran, who had played a central role in my upbringing and joy in my childhood, died as when I was in my second semester of seminary. Gran was more than just a grandmother via biological connections, she was a friend, a confidant, someone in whom I talked my problems over with regularly. She made me feel special always in a way that others did not. When she died, the loss stung deep. It ached. It made me feel like there was no reason in the morning to get out of bed– though trust me, there was plenty of papers calling my name to write! But, I couldn’t seem to get over it as much as I tried.

Anne Lamott in her book Operating Instructions writes about the first year of her son’s life the experience of getting used to motherhood but at the same time grieving the death of one of her closest friends saying, “And I felt like my heart had been so thoroughly and irreparably broken that there could be no real joy again, that at best there might eventually be a little contentment. Everyone wanted me to get help and rejoin life, pick up the pieces and move on, and I tried to, I wanted to, but I just had to lie in the mud with my arms wrapped around myself, eyes closed, grieving, until I didn’t have to anymore.”

Sometimes as much as we want to get over the loss of someone or something, we simply can’t. Our grief grips us and becoming the central story of our lives to the pint in which we simply can’t even comprehend seeing past our own circumstances.

Grief, as many of you know, especially those of you who have studied it in workshops and other seminars, is not always about loss via death. Grief over the loss of careers, aspirations or relationship which used to be close but are no longer can paralyze us as deeply as any physical death can. To wake up one morning and find that what you thought was your life work is destroyed by the rejection of others, to come to terms with your best friend no longer is speaking to you, or be let in on a truth about our family after years of secrecy, we can feel smacked in the face. Grief seeks to holding us down for as long as possible. Grief, if we don’t find a way to move through it can destroy our lives.

In our Old Testament lesson for this morning, we meet the prophet Samuel again.

Called out as the great prophet of Israel, called out as young boy to be the saving grace leader of a nation in deep decline, called out as the one who would be God’s spokesperson to a people desperate to hear a good word– Samuel  was on top of the world. Things were going great! Samuel was the hope of the nation, after all.  Yet, in this state of extreme responsibility, I can imagine that Samuel  felt  he needed to make just the right choices at just the right time so to ensure that the nation of Israel had a future. And for a while, it seemed Samuel tasted the sweet fruit of his good, seemingly God led choices.

And it is at this juncture, we find him in a place of deep grief.  All is not well in his world.  Samuel blames himself. He pouts. He cries. And, see Saul’s failures as a reflection of himself.  How can he ever again show his face in public after Saul has flopped big time? Grief was his primary story.

And God has a word with him about it saying in 16:1: “How long will you grief over Saul?”

Or, “How long, Samuel will grief be your story?”

It is not that grieving is wrong or an inappropriate emotion, but that for every period of grief, (especially the more pity party kinds)– there comes a time when it must end. For as spiritually cleansing and healthy as grief is, it’s an emotion has a time and season. For, if one stays in a grieving process too long, past its time– it can actually be destructive. For Samuel, God says, it is time to move on.

Grief over what could, should, would have been and all the feelings of personal failure internalized held Samuel captive, we learn. In particular for Samuel, his grief held him captive to only what he could see, hear, and feel in the present moment. Grief stole his vision for life and the people he was entrusted to lead.

Thus, the Lord is saying to him, “You are not perfect. All is not perfect in this land.  I know this. But one thing still holds true: I still love these people. I still love you. And, there is work to be done in the future!” And this is the post-grief task one that our text narrates for us, God says: “I have rejected [Saul] from being king over Israel. Fill your horn with oil and set out; I will send you to Jesse the Bethlehemite, for I have provided for myself a king among his sons.”

Though Saul has been a disappointment of a king and leader and Samuel wants to keep believing that it was all his fault, such feelings just aren’t helpful. In fact, God is asking him to dust his sandals off from the dirt in which he’s sat and go be a part of the next great thing that God was going to do in the nation: anoint the next king.

And, it’s important to note here that it would have been easy for Samuel, as he went to find the next leader, to fall into the trap that is naturally a part of being in an aggrieved state: the syndrome of “must do anything to fix the pain right now.”

You’ve met these people if you aren’t one right now: the “hurry up and get this over with” folks. Pain and its effects are despised so much that  these people will do anything not to feel the pain of disappointment, rejection or loss.  Things like:  drinking too much wine  when they get home from work, staying at the gym too long and skipping meals, or even drowning each night away in mindless tv– just avoiding the grief through a distraction.

Or, the approach of getting to work too rapidly, taking the lead alone to solve the grief right away. Type A things like signing up for every single class or seminar known to man about a particular issue– trying to become the expert of one’s own problems. Things like making lists after lists after lists of what can be done– trying to logically organize their way through your problems. Or even, the simple act of refusing to rest through grief– doing, doing and more doing.

In all of this, I believe that God knew that Samuel could be in this exact place as well– trying to avoid or solve the problem too quickly. Samuel is given exactly, then what grief needs to keep moving– clarity. Samuel is told exactly what to do, exactly what to say, and exactly who to listen to when he arrives at the hometown of Jesse.  The end of verse three gives us what is most important as a word from the LORD: “You shall anoint for me the one whom I name to you.”

Specifically Samuel was told in verse 7 not to make a quick judgment just to get the process of selecting the next leader done as quickly as possible. Sa 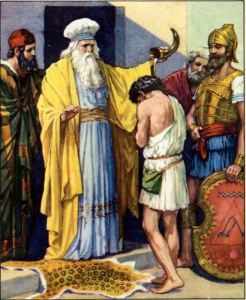 ying, to Samuel, “Do not look on his appearance or on the height of his stature, because I have rejected him; for the Lord does not see as mortals see; they look on the outward appearance but the LORD looks on the heart.”

God saying, “Don’t just go Samuel to who you think meets the criteria that others will approve of. Instead, listen to me. I can show you who has the heart for the work of king. Don’t make this process about you. Listen.”

Or simply stated, Samuel could have rushed through the line of brothers among Jesse’s sons– very easily he could have solved his failure complex quickly– but if he did, then, he’d be missing out on an opportunity to hear God’s leading.

And, thus, this is the surprise– in Samuel’s grief, in his pain, God was about to do a new thing, a new thing in the life of Israel where healing would come from the unlikely choice of youngest son David as the next king as Samuel kept listening. This was all he was asked to do.

I can remember some of the most powerful words said over me (that I obviously still remember to this day) at my ordination service. During the laying on of hands a deacon of the ordaining church came up to me and said, “Listen to God. You’ve gotten to this point in your life through listening and you will do great things if you keep listening.”

Isn’t God funny like this sometimes? We make it so difficult when all we are asked to do is to put one foot in front of the other and listen as we go.  Of course this doesn’t take away the pain or the loss, but we do have direction for what is next. And this can be grief’s greatest surprise . . .

How else have you been surprised by grief in your life? I’d love to know!