Any leader is only as good as their team mates and back-up support on call. This is what I know from being a pastor.

When I first came to Washington Plaza, as the pastor, with only two other part-time staff members to help carry the load, I had no pastoral back-up. (Not even a retired minister in the mix). I worried a lot when I was away for conferences or vacation about what might come up. (My plea to those ill: Please wait to die until my vacation is over).

Furthermore, to expect the pastor to be and always do all of the pastoral care, I knew was unhealthy and unbaptist (we love the priesthood of the believers after all).

So, I inquired of the church leadership why we did not have deacons. No one really could give me a good reason. My response became: "Why not?"  (It all went back to the previous pastors' preferences, it seemed). Not only would deacons help me, but I knew it would be a blessing to the congregation. It would be a great opportunity for some very kind and spiritually aware members to live into their giftedness. A win-win!

So, in 2010, we engaged in a year-long study of the visions of what deacons would look like in the congregation-- the Washington Plaza Baptist way-- and came up with a plan. We'd follow the model of the early church and elect deacons to be spiritual leaders and servants among us. We'd call out those in our community who we felt had the gifts and interest in this kind of service through a nomination process. And, then we'd ordain each of them in a formal service of blessing their future ministry as pastoral care givers in our midst. To give the deacons the support they'd need for their 3 year term of service,  we'd pledge to meet monthly as a deacon body to share joys and concerns of working alongside the families we'd been given to look after. And, no, the deacons, contrary to the standard in many Baptist churches, would not serve in an administrative capacity. We'd leave this to the Church Council.

November 2010 marked the first deacon ordination service in over two decades at Washington Plaza.  It was a joyous day as you can tell from this previous post. It was one of those days as a pastor when I felt like God's spirit was especially cheering us on saying, "You are moving in the right direction as a congregation." Who says an ancient tradition can't be re-born in fruitful ways for the modern context?

This month, the official one year anniversary of our first deacon's meeting, we did some self-reflecting as a group. Though we've had a lot of learning to do over the year, I've been so proud of the ministry I've watched our deacons provide in their service to the church.

One of our current co-chairs wrote this piece to share with the congregation more about what the deacons have been up to in the last year. I thought I'd share it here so you could hear more of this co-labor of love.

It been a little over a year since the deaconate 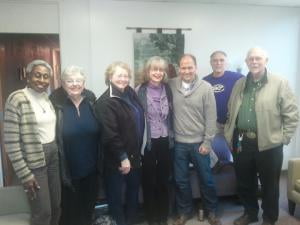 was re-established at WPBC, and thus it is an appropriate time to update you on what we have been doingand plan to do.  You installed Rainy Barsella, Leomia Brunson, Kevin Hagea, Don Mohl, Shirley Rees, Carolyn Rieth, and Jeffrey Thigpen as deacons; personal commitments prevented Jeffrey from continuing active service, and Richard Williams agreed to serve in his stead at mid-year.

First and foremost we are all committed to our role as helpers to the congregation and the church.  It has been our goal not to be noticed, but rather to quietly walk among you and provide support as needed.  We see our primary task as being there for each of you in all the seasons of your life.  It is this role that has motivated us to undertake a year-long study of pastoral care and spiritual direction using Jean Stairs’ book, Listening for the Soul.  The study has added depth to our ministry which we hope to grow into fullness in the coming year.

As the first step in this we have begun the practice of “shut-in” communion.  Each of us who has participated has been moved and sensed joy in the expansion of fellowship to those who are unable to join in our services. It is this area—strengthening the ties that bind the WPBC community together—that will continue to be the focus of our ministry.  It not our task to be substitutes for Pastor Elizabeth, but rather to be aids in ministry, tasked to insure that at no time does a need of this community go unmet.  In this context, we encourage you to share with your deacon who stands ready either to directly help, or to seek spiritual or physical help as needed; for we believe that each one of you is most precious to God and to WPBC.