When people ask me what my hobbies are, I usually feel quite lost. I’m not sure exactly what to say because I don’t naturally gravitate toward activities that seem hobby worthy (getting pedicures just doesn’t count does it?). But, there is one thing I always do regularly– even as dorky as it may be– and that is reading. My life just doesn’t seem in balance if I don’t have something or somethings ready to go on my night stand. It is hard to pack for vacation sometimes because I simply do not have luggage space for all the books!

I’ve stumbled upon a few great ones lately that I thought might be worthy to share here with blog readers. Most are prose that have inspired me to think or re-examine what I believe about something– my favorite type of books instead of just the fluffy entertainment driven novels (for me, this is what tv is for). If you’ve read any of these and have a strong reaction for or against in someway, I’d love to hear more about it.

1. Orange is the New Black: My Year in a Women’s Prison by Piper Kerman

“With a career, a boyfriend and a loving family, Piper Kerman barely resembles the reckless young woman who delivered a suitcase of drug money ten years before. But that past has caught up with her. Convinced and sentence to 15 months at the infamous feral correctional facility in Danbury, Connecticut, the well-heeled Smith college grad is now inmate #11187-424 . . . ”

After finishing this one, I found have new appreciation for the injustice and conditions of women’s correctional facilities in our country. The humanity of women in prison, the stories that led them to be there, and the toil of their daily lives beyond bars captured me and I could hardly put this book down. Though we often what to tell the stories of prison of “bad people” vs. “good” this memoir breaks a part this stereotype and leaves it here for the entirety. I was inspired to think about how I might be involved in prison reform in the future and believed that this book would be a great text for a book club at a congregation discerning the beginnings of a prison ministry. 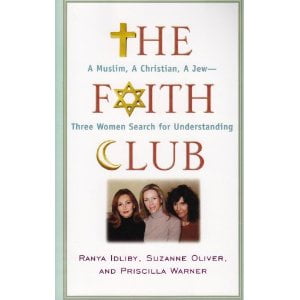 2. The Faith Club: A Muslim, A Christian, A Jew– Three Women Search for Understanding by Ranya Idliby, Suzanne Oliver and Priscilla Warner

Though not a new book, with the 10th anniversary of 9/11 coming up, it is a great one to pick up for it is a story that began out of this tragedy. Three women, mothers, of different faiths wanted to get together to write a children’s book about tolerance and peace in the wake of how the events of 9/11 forever changed the city of New York, where each lived. However, as soon as they began to meet to begin to work on the project, they learned that there was no way they could work together if they did not know each other first.  And, thus began a series of Interfaith conversations that became this book.

This text is one that a group of us from Oakbrook Church, Northern VA Hebrew Congregation in Reston and the Adams Center in Sterling, VA along with folks from Washington Plaza are using to have an Interfaith conversation in our local community. We’ve met once already for our “faith club” gathering and look forward to more. If you are interested in joining this book club, let me know! 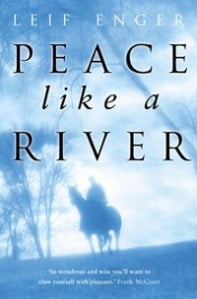 It’s a novel and I normally stay away from novels, but really found myself drawn to the language and imagery of this one, especially after several of my colleagues at the Collegeville Institute recommended it several weeks ago– many as their “favorite read” on the first morning of our group sharing.

“The novel is narrated by Reuben Land, an eleven-year-old boy suffering from severe asthma who lives with his unusual family in a small Minnesota town in 1962. His mother abandoned the family years before. He is among three children: his older brother Davy, who is sixteen years old when the story begins; and his younger sister Swede eight years old, and an imaginative writer and poet. His father, Jeremiah, a school janitor, is a man of faith who quietly performs miracles – one of which is to bring Reuben to life after his lungs failed to inflate when he was born. Reuben is the only one who ever sees or notices these miracles; he concludes that he is meant to be a witness to them.”

And, this is just the beginning of the adventure . . . check it out.

4. Before and After Zachariah by Fern Kupfer

This is a book recommended to me by Sari, the writing tutor from my week at Collegeville. And ever since I started it, I just couldn’t put it down. The vivid language and emotionally driven plot is captivating.  Again, not a new book– written in the 1980s in fact, but full of powerful insights for any going through a time in their life of pronounced pain and loss– not only for who or what might have died, but for what is living and still is just not as it should be.

This mid-western family documents through the voice of Fern, the mom, the ups and downs of what it means to birth, raise and make decisions for the care of a severely mentally and physically challenged child. Questions of “when it is it time to institutionalize?” “how does a marriage survive such kind of care for another?” and “how do you parent a ‘normal’ child while taking care of such a ‘abnormal’ one too?” are raised in ways that the reader does not often expect.  I was challenged to reconsider how I think about and care for parents and teachers I know who are caring for special needs children.