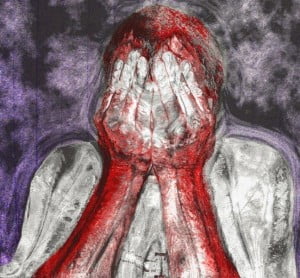 Want break up a conversation in a room? Say the word shame. Everyone stops talking.

I know this first hand from the experiences I’ve had this spring promoting Birthed: Finding Grace Through Infertility. One word has risen to define so many of the talks I’ve given is SHAME.

You can’t speak about infertility without talking about shame couples feel when it shatters their dreams. One person voiced to me recently, “Infertility can make you feel like a second class citizen.” So true! And while it’s an uncontrollable medical condition, a infertile woman (and sometimes the man) believes it’s her/ his fault! And so why would we talk about that? (Much less write a book about it!)

But by time I reached the publication date of Birthed, grace found me on the healing journey. As Nadia Bolz Webber is known to say, “it had become a scar, not a wound.”

So now, as I’m on the road talking about Birthed, it has been baffling to me how many people have tried to shame me for telling my story.

Or, “I would have stopped reading the book half way through if I didn’t know you. You write too personally about things.”

As easy as it would be to accept the shame others want me to feel about writing such a vulnerable memoir, I refuse!

I want to say to my critics, “Why can’t you tell the truth about your life too?”

This I know for sure: we have so much work to do in un-shaming not only infertility but divorce, mental illness, affairs, abortion, suicide, job loss. You name it, we love to shame it especially in faith communities.

I know I’m not the first one to say that we, as humans, love hiding our pain. We love appearing more put together than we really are. We love sitting in the pews during religious services allowing our real lives to stay hidden. And often for good reasons. Words that enemies and friends alike throw our way can make us feel terrible!

But, in the Christian tradition we live by another narrative. It is for freedom that Christ set us free!

I’m so thankful for the voices of truth-telling who’ve come alongside me in this journey, who’ve held my hands when I’ve felt discouraged and beaten down. Friends who’ve bought my book and even wrote a review on Amazon!

I’m especially grateful for those who participated in my Lenten blog series this spring. Each writer told a story of how a potentially shameful part of their lives birthed something beautiful. If you followed it, you know folks shared some great stories!

Today, I not only want to thank each of them publicly for their courage. But, I want to point to their posts again as resources for you and your communities of faith. I’m proud to be in their vulnerable tribe and believe the world needs more storytellers like them. Because this is the only way the tide of shame is going to change.

Alice shared her story going through a divorce.

Amy wrote about the unexpected loss of a job.

Dena talked about the ongoing suffering of chronic pain.

Anne wrote about her son’s diagnose of autism.

Dolly wrote about she was formed by her father’s death, a stillborn child and her divorce.

Master teacher Brene Brown encourages us all here saying: “Owning our story can be hard but not nearly as difficult as spending our lives running from it.  Only when we are brave enough to explore the darkness will we discover the infinite power of our light.”  Amen to that!

P.S. I’m always interested in accepting guest posts. If Preacher on the Plaza can be a place for you to share, a story, I’d love that. Send me an email.

I Miss Being an Evangelical . . . Sometimes.
Next Post: How to be Kind on Father’s Day