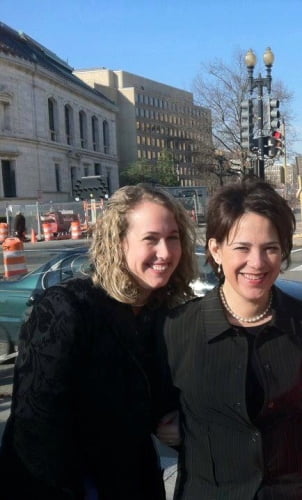 If you missed this week’s first saint story, click here.

Continuing with the series today, I want to introduce you to my friend Amy– a living colleague who has walked the journey with me for almost 10 years.

It’s hard to describe my journey in ministry without talking about her presence in my life.

Many of you know her now because she’s the pastor with her name in lights— blazing new trails as the first female senior minister at The Riverside Church in New York City.

But in 2004, from a library computer at Duke Divinity School in between my classes, I wrote Amy a blind email asking if she’d be interested in having a pastoral intern for the summer of 2005 at Calvary Baptist Church in Washington DC .

To surprise of us both, she said come on!

As the summer of 2005 began, I hoped that Amy would like me. I hoped she’d give me meaningful things to do.

Yet, from the first week, I realized that a redemptive experience was underway that went way beyond these some sort of “Do you like me? Check yes or no” jitters on the first day.

Amy was and is a different kind of pastor. And she was inviting me into her sisterhood.

Amy took me quite seriously. She gave me great projects to work on such as organizing the first booth at Capital Pride on my first day! But not only did I get thrown in the deep end work wise throughout the summer (which was wonderful), I became a part of her life.

I spent time with her family. I found a safe space to share my frustrations and joys of the past and present about the crazy profession I wanted more than anything. I listened to her laments and exciting moments as well. She invited me into her process of what it meant to a young pastor.

Even as Amy juggled the demands of family, three kids, and time for herself, I never felt like she didn’t have time for me, as had been the case with other pastors I knew.

I saw someone thrive who intensely pursues interpersonal relationships in the pastorate, and I recognized the goodness of this strange gift of mine once again.

As I heard Amy speak daily about the church as a community of faith, living and struggling together, my similar vision of church was deepened and affirmed as well (this community stuff actually works!).

And most of all I was encouraged by Amy’s “make your dreams come true” pursuit of life.

From that summer on, I believed that barriers such as conservative upbringings or discouraging denominations can not keep the call of God from springing forth in women like me. God has created and called me with exactly what I need to minister to the local church.

From the internship I became her colleague, and  then a friend. More than a year later, Amy spoke at my ordination (which I’m celebrating my 8th anniversary today!). A year after that Kevin and I chose her to perform our wedding. And two years after that, Amy was one of the speakers at my installation when I became a senior pastor a couple of miles down the DC beltway.

Now, I’m thankful Hagan household has many reasons to visit New York because of Feed the Children‘s presence there, so we can continue to be a part of her life and ministry.

I thank God for living saints of the church like Amy– not just for all she’s accomplished along the way (which is a lot!) but for the gift of friendship that she so richly shares with those on her path.

Thanks for answering my email back then and all the email since . . .