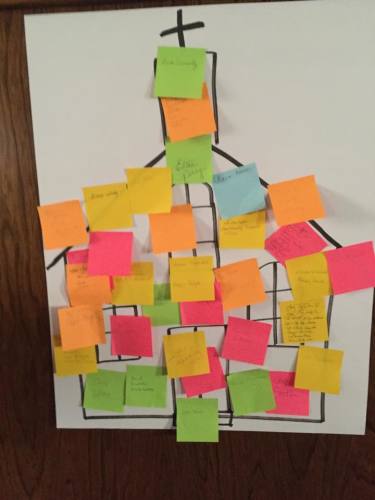 Today is All Saint’s Day and in worship this morning at The Federated Church, we remembered the saints. Not just those persons who had died in the last year, but any person in our life that helped us grow in faith.

At the conclusion of the sermon, each congregation member wrote the name of a saint and brought it forward and placed in on a picture of the church. It was a way to visualize: these are some of the great cloud of witnesses cheering us on!

And this is who was on my post-it:  Joe Smith.

[And no it’s not code for some other name. His actual name was Joe Smith—though he hated the ordinary value such a name ascribed him, for he lived no ordinary life.]

Joe and I met over 7 years ago when I was serving my first church out of seminary in the Washington DC suburbs of Maryland.

After being personally recruited by the senior pastor to come to this multi-staff church as his associate pastor, six months later, the senior pastor announced his retirement. I was devastated and worried about my job security and the possibilities for who would be brought in to replaced my beloved boss.

And Joe Smith was the church’s replacement.

From the first time I laid eyes on Joe, I knew I wouldn’t like him.

He seemed eager to take my job responsibilities away. Even worse, in our first conversations, he didn’t seem have much respect for young ministers with blonde hair. I remember going home to Kevin crying one bemoaning the fact that I wasn’t going to preach again as long as Joe Smith was my boss. He didn’t not want to put me regularly on the preaching schedule.

But, as time passed, the coldness that lodged between Joe and I began to melt.

We realized that our first impressions of one another weren’t true.

We both admired in each other how hard the other one worked and how much we enjoyed being with people. He learned I wasn’t a terrible preacher. This man I’d once named my enemy became my friend. (See him pictured directly across from me in the picture below) 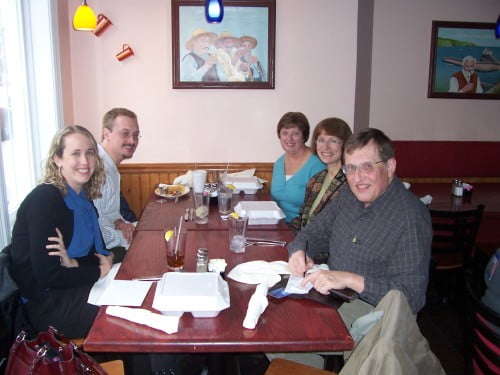 And when the opportunity came up for me to lead my own congregation, Joe was the first person I told.

He was delighted beyond words to come and be one of the preachers at my installation service when my position became finalized.

On my first Sunday at Washington Plaza in January of 2009, I found flowers on the altar that I knew he’d arranged to be present there in support of the day. When I thanked him, he just said, “I wanted you to know that we were thinking of you.”

Kind, unassuming gifts were his thing.

And as he cleaned out his library in the months that followed, I was one of the first calls he made. “Do you want to come over and take some of my favorite books?” The Bible that I just read the scripture from this morning was once his.

Joe and I were unlikely friends, but from him, I learned some of the best things I know about following in the path of Jesus.

For at his best, Joe was pure in heart. He modeled for me a life that was all about showing up, believing in God to do what only God could do, and loving people through whatever life handed them. He was a very good pastor.

And when he got sick and died quickly of cancer only a year into my solo pastorate, I got a call from his wife that he had requested that I be one of the speakers at his funeral. I was shocked, asking his wife, “Doesn’t he have some more important colleagues he wants to speak?” “No,” she said, “He wanted you.”

Funerals are for the living, not the dead, as Joe knew—and I believe his act placing me on the speaker’s list was Joe’s last gift of encouragement to me. His way of saying, “I believe in you. Keep learning how to live life well too.”

Joe is a saint in my book because in his own quiet way, he used his life for the kingdom. He was the prophet of a future that was not his own, not just because he was a pastor but because he loved Jesus.

He taught me so much about how to follow Jesus too. And today, I am thankful for his memory.

Over the next week, I’m going to be naming more saints I’ve met along my journey. Watch for another post on Tuesday! And would love to invite other bloggers to post about your #saintstories too. If you blog about a saint send me a message and I’ll be sure to tag you to this series.