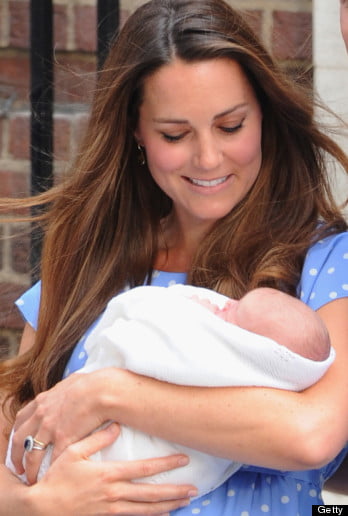 There’s been a lot of fuss over this royal baby this week hasn’t there been?

When would the Duchess give birth?

What gender would the child be?

When would they leave the hospital?

How would the new family get home?

And, finally what would the child’s name be?

Even if you haven’t been royal obsessed, it has been hard to avoid all of the sentimentality about the birth.

I was at the gym on Monday afternoon when all the TV stations broke their regularly scheduled programing to tell us all, “It is a boy!”

When Kevin came home from meetings on Capital Hill on Monday night, his first statement to me was “Did you hear about the birth?” Apparently all (but one) of the Congressional offices he visited posted congratulatory signs on their doors to Will and Kate. (Seriously do we live in Great Britain? Really?? I digress.)

Furthermore, the story blew up twitter this afternoon—all the commentary about this special boy’s name: George . . . just as it had done on Monday afternoon when a clergy colleague of mine tweeted, Kate Middleton, 1; Anne Boleyn, O. (I couldn’t help but laugh).

Commentators have spent lots of time talking about the great expectations for this baby Prince: how the hopes and dreams of the nation lie on his shoulders. 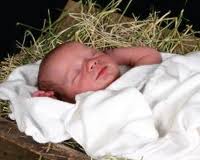 All this talk has got me thinking about another baby. A baby we don’t talk much about this time of year.

A baby worshiped as king by some wise guys, but such adoration was not followed by cameras tracking his first coos and burps.

A baby celebrated by the songs of angels, but a without even a proper blanket or place to lay his head.

Sure, you might say: “Why did you have to spoil all our ‘royal fun’ by bring in that baby?

The truth be told I can’t get the comparison of the two out of my head.

For as crowds cheer at the sight of Prince George and as a designer sells out of dresses similar to that which Kate wore out of the hospital on Monday, I have to think of the other baby.

THE baby who came into this world and lived among us as a commoner, the baby who would not grow up in a palace, and the baby who would face the kind of hardship in his growing up years that royal types like him might not be able to ever imagine.

I think of the baby that would grow up to say, “Those who want to be greatest among us must be last . . . and those who are last will be first.”

I think of our modern world’s obsession with prince and princesses and celebrities, and any competition television show that will make us famous.

And in comparison I think of that baby, the baby who appeared in this world without pomp and circumstance among the adoring masses, but in the greatest posture of love.

And in of this, I can’t help but be reminded of moments in my own life when the royalty of God has shone the brightest. Not when I’ve brushed shoulders with a famous person like the time I saw Katie Holmes walking a NYC street, or when I had my picture made with the basketball star, Shaq at a fundraiser . . .

But, when I’ve been in remote villages, such as in the Philippines where voices of children made a desolate space beautiful. A time when I visited a family in the hollers of West Virginia, where a trailer became a sanctuary of prayer. A time when I was welcomed by friends at an all-African American church– a church that loved me and nurtured my calling even though my skin color could have made me an outsider.

The royal baby is great and all (and I truly wish Will and Kate all the best!), but maybe for those of us who seek to follow in the footsteps of another royal baby born over 2000 years ago, the place for our hearts and minds to dwell are in places far, far away from the babies born in privilege and power.

For as followers of this one called Jesus, we are children of a different kind of royal king.

Creating What Doesn’t Exist
Next Post: We’ve All Got Bruises