For those of you who are newer readers to the blog you may not know where the name “Preacher on the Plaza” came from.

All of this blogging started in 2009 when I became the pastor of Washington Plaza Baptist Church— a lovely little congregation that sat in the middle of Lake Anne Plaza in Reston, VA. Want to read about my first days on the job and more about the church? Click here.

So, it seemed fitting that if I was going to blog about my work with Washington Plaza, then the name “Preacher on the Plaza” would be the best choice considering I was pastoring THE church on this famous Reston plaza.

But as I left this church in 2012 and made the move to Oklahoma for things to come, the name stuck around.

It seemed that the more I sought to figure out life and ministry, the places I felt called to the most were outside of the church. . . . while keeping one foot in the door of it too.

For doesn’t the call of Jesus lead us outside the walls of the congregation anyway?

A couple years ago, when I redesigned my blog in this format, I asked my friend Scott Henrichsen to take some pictures that would reflect the theme (thus the header I use today). It was a very cold, cold day in downtown DC near K street. But you can’t tell it from how he organized the photos. 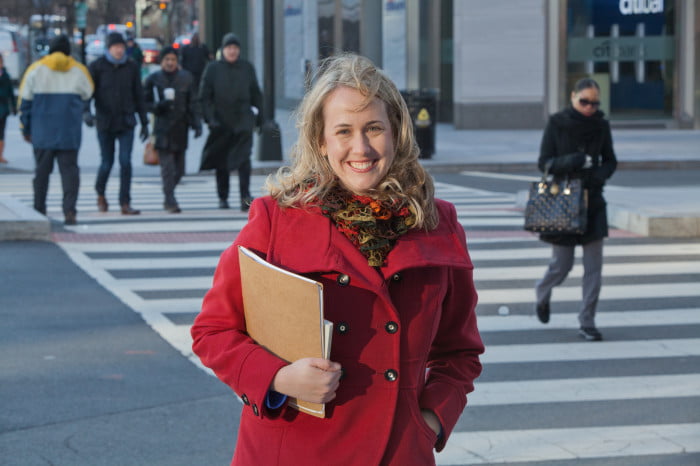 But much as has changed in my life since then– three years in Oklahoma and now back in DC– so I thought it was a great time to re-do some of the images.

So this week, Scott and I hit the streets again this time in DC in the Eastern Market area. It turned out to be a much different shoot than before. Mostly because it was a beautiful day in the city and folks were a lot more willing to chat!

Scott told everyone that I was a “street preacher” to which I had to correct him and laugh every time (You know, I’m not the stand on the milk crate, hell fire and brimstone type) and that he was taking pictures for the Preacher on the Plaza blog.

I was reminded all over again that people want to connect with clergy– just if we go to the places where they already are.

We’re really not as scary as people think. We eat and breathe like everyone else. And we might just be fun to talk to!

So, first, I chatted for awhile with this father and son in DC from down South, who were celebrating the award of one of their family members who just received an national honor of parent of the year. 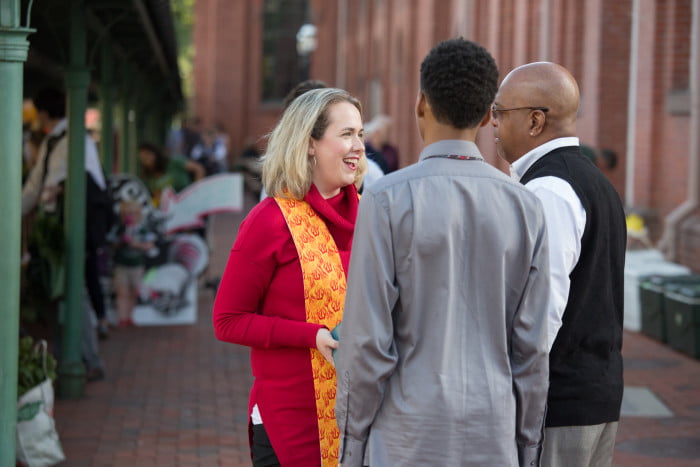 It so easy to bond with people over the dogs, like I did with this couple out getting ready to buy some fresh vegetables at the open air market. Though you can’t see their beautiful pup in this photo, “Joe” was a cutie! 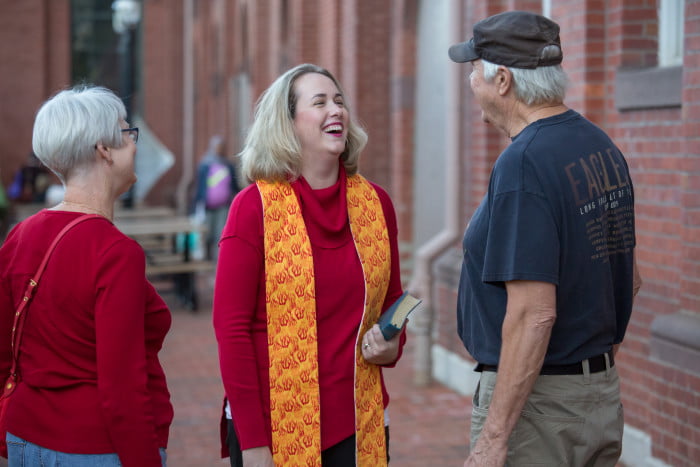 Then, I met this couple who was visiting the DC area from Pennsylvania and really happy to be doing some shopping in the city. 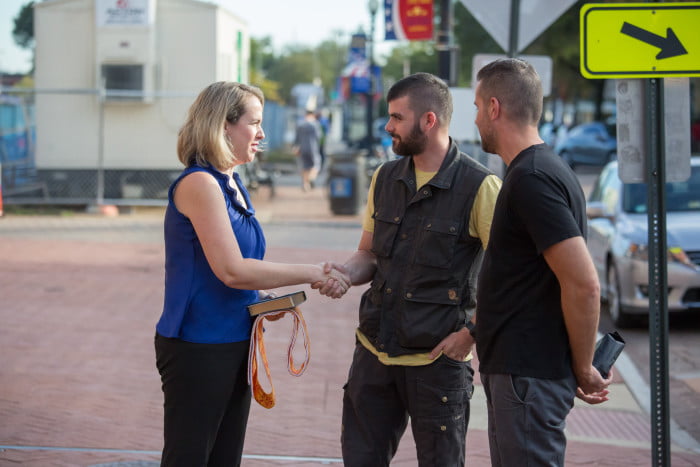 I then began talking to this man who plays his guitar every afternoon in Eastern Market but spends his weekends in Georgetown, playing there because the tips are better. 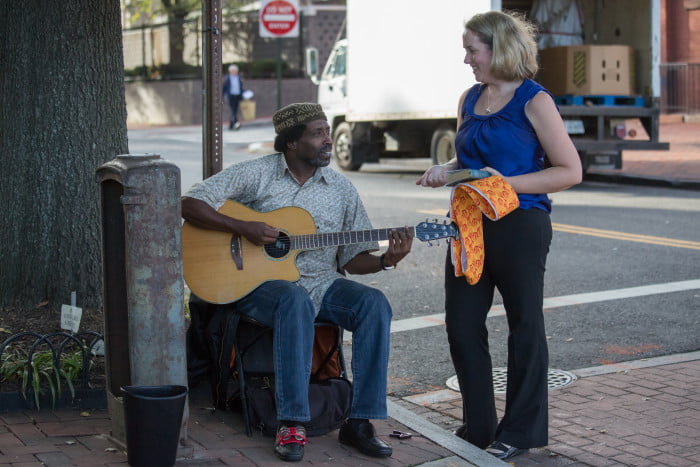 He then asked me if I knew any church songs, to which I said yes!

“Do you know Amazing Grace?” he wondered. “Of course I know it,” I answered.

So, right here on this street corner, I sang Amazing Grace.

What you can’t tell from the picture is that a flock of 5 year old karate students passed by and wondered what in the world was going on! 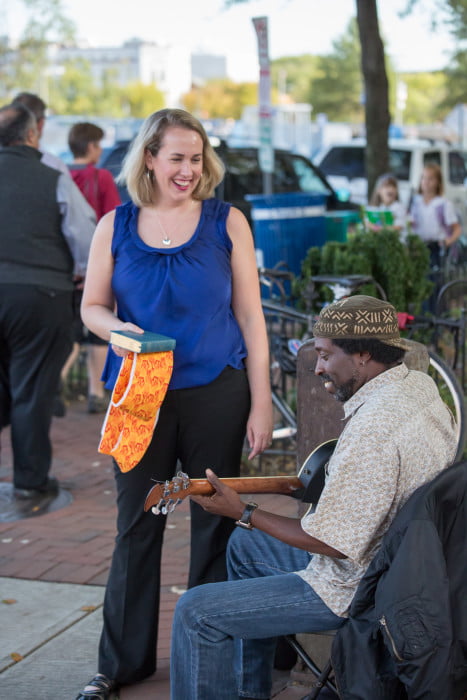 What a blast that was!

Then, I was able to meet this young couple expecting their first child. I heard stories from the mother-to-be about her grandfather that was a Lutheran but also a “Pentecostal, full of the Holy Spirit” kind of preacher. “He was such a great man!” she added, “People loved him.” 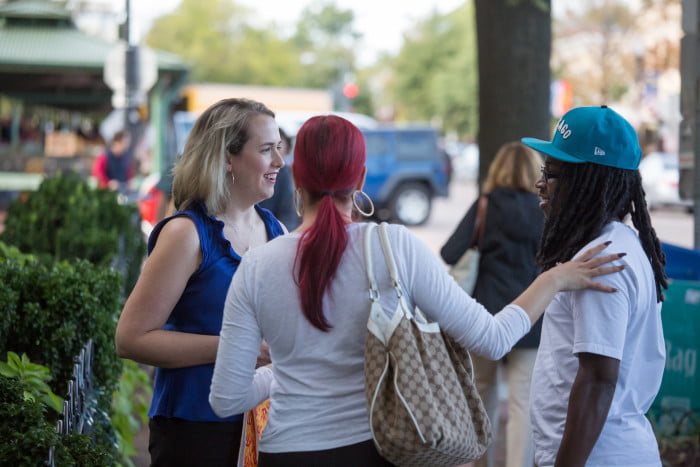 They were so interested in what kind of pastor I was and asked me several questions of about what kind of ministry I do. She wrote down the address of my blog. So, if you are reading right now– it was great to meet you! 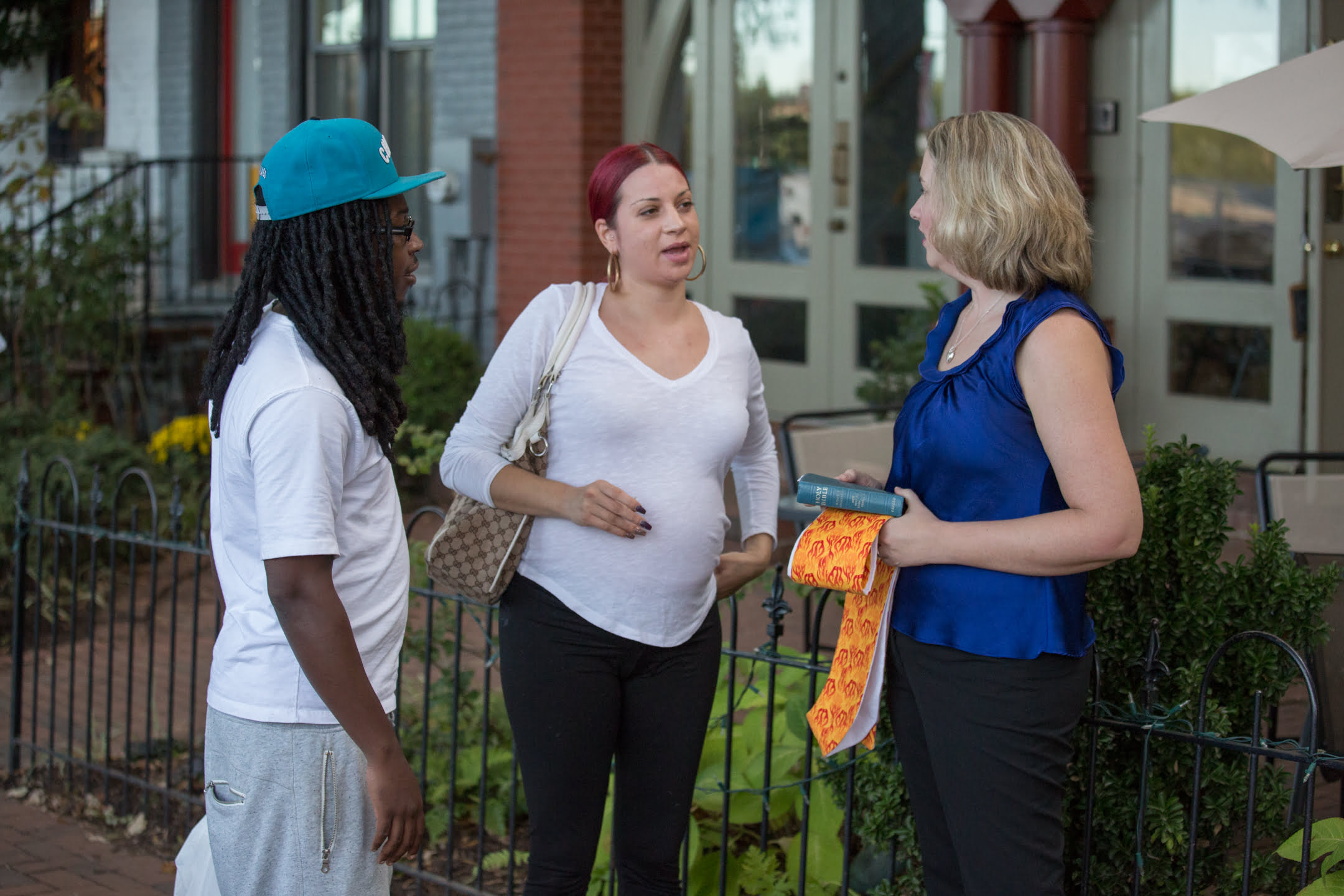 Maybe I should get out to the plazas more often. What beautiful people I met! Thanks to Scott for the capturing the moments!

Communion with Integrity
Next Post: Living with the Discomfort