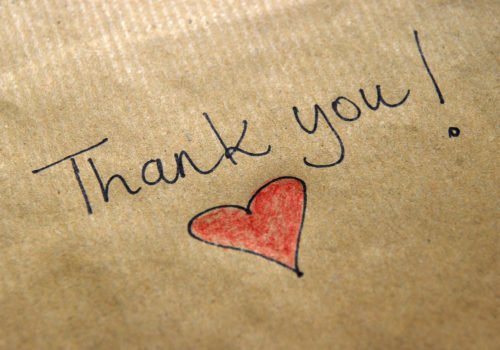 There are two words that are never going out of style in the English language.

But we aren’t a culture that is really very good at thank you’s are we?

How often are feelings hurt because someone forgot to say it,

One of my favorite gospel stories on the topic of saying “Thank you” comes from Luke 17:11-19.

And this is the scene: Jesus is on the way to Jerusalem. While passing the border between Samaria and Galilee, he and his disciples hit a rest stop known as a local village.  And in this village, Jesus and his disciples were greeted by a group of ten men. They were all lepers– a contagious skin disease that caused massive deformity.

Though pale by comparison to many other instances, a couple of years ago we had experience in our household that gave me greater sympathy for who have dealt with skin deforming or long-term contagious diseases.

During the two weeks that followed and Kevin while was contagious our whole household routine was altered.

I have to confess I went a little crazy trying to make sure I didn’t get it too.

I made these rules: we would not sit on the same pieces of furniture. We would wash all of the sheets and towels immediately in hot water after Kevin finished with them.  We would wash our hands frequently and we would clean the bathroom a lot.

A week or so in to the ordeal, I think what was worse was not just the physical pain Kevin had but the social isolation. He told me how much he missed human contact. He missed being able to come home and sit wherever he wanted on the couch. . . .

In a similar way, these lepers felt isolated.

Their family members kept their distance. Even worse there was little hope that they’d ever get “well” because known medicine at the time had few solutions.

Yet, on this occasion scripture tells us, they risked everything and approached Jesus.

And, Jesus’ response was, “Go and show yourselves to the priests.”

We might think this that this is a strange request—why did they need to go to the priests? Could have Jesus just healed them on the spot?

Much like a person today wrongly accused and placed on the sex-offender registry, to be a leper was a sentence of societal isolation until the religious powers that be changed the degree about the person.

A leper needed to be first verified by the priests BEFORE the person could re-enter the world and be treated like everyone else.

So, in Jesus telling them to go to the priest, he was saying to them, in your faith in me, go get what you need to have your cure from leprosy. Go to the priest and you will be clean.

What happened next? Verse 14 tells us that without hesitation all 10 go as Jesus tells them, and “as they went, they were made clean.” It was a miracle! They were given the cure that each of them had been dreaming about for years! What a day! What an amazing day it was.

We read no record that 9 of 10 lepers ever saw or talked to Jesus again. 9 of them said nothing more to Jesus. There would be no thank you from their lips.

It would be easy at this point to begin to speak negatively of them. Why did they NOT say thank you? Wouldn’t have that been the polite thing to do? Yet, we never hear harsh criticism by Jesus of them. The lepers were cured after all and life would be forever different! They needed to celebrate.

What about that one, though? The one who we read about in verse 15 who “saw that he was healed, turned back, praising God in a loud voice.” What was different about his experience? What did he come back and say thank you?

I think distinction comes as we follow the word “see” throughout the passage.

Hang with me for just one minute.

First, there is Jesus, who “saw” the lepers for the human beings that they were as they cried, “Unclean! Unclean!” It was where the miracle began.

Then, there was the one leper who after being cured “saw” himself as a new person and turned back to go to see Jesus once again.

Jesus and this one leper paid attention.

And this is the powerful part of the story in this one man’s coming back to say thank you, he was more than cured from his disease he was healed.

For there’s a difference between being cured of something and being healed, isn’t there?

And this one who came back to say thank you got both a cure and healing too.

How? Jesus tells him that “his faith had made him well.” I want to stick with the word, “well” for just a minute because I believe it has a lot to teach us about what transpired.

The phrase, “made you well” comes from the Greek word sozo which is commonly translated “to save.” A soter is a “savior, deliverer.” Thus, in being “made well” the Samaritan finds salvation, but not salvation in the way that many of us might think of in terms of the typical “get saved” terminology. No, rather, by coming back in praise of God, the former leper acknowledged his dependence on something greater than himself.

This was the HEALING-

The years of anger, the years of bitterness, “Why me, God?” the years of emotional and spiritual pain were no longer chains that bound him up on the inside, as much as his disease isolated him from others on the outside.

He finds rest for his soul.

Few of us crave this kind of healing, do we? We often pray for CURES when we hear someone has cancer or is struggling with addiction or depression.

“Dear God, please help my son not make so many bad decisions.”

“Dear Lord, get me OUT of the hospital.”

But, I want to suggest in moments like this, we might in fact be focusing on the wrong things . . .

What if we, left the possibility of the “cures” to the mystery of life, and instead, remembered that all of life is gift?

This is what I most know: only leper who was healed was the one engaged in gratitude.

I have no idea, I know, my friends what is burdening you today, but what I do know is that gratitude is an invitation to the healing God wants to give us all. All of us.

Be the one who says thank you!

How I Got Through Dark Times
Next Post: Advent’s Hope