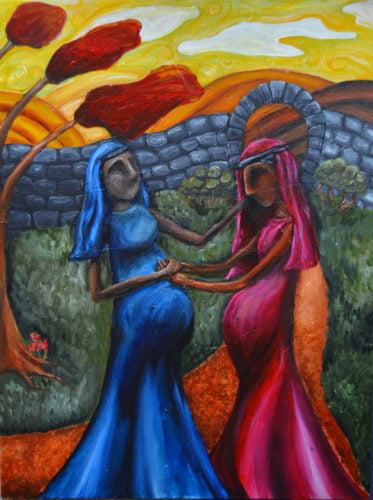 Would Mother Mary have anything to say to us today about the new tax law signed by our President today?

Last Sunday, at my congregation, we skipped ahead in the lectionary (this church year being so odd with the fourth Sunday of Advent falling on Christmas Eve!) I preached on Luke 1:26-56 otherwise known as the story when pregnant Mary and Elizabeth meet for the first time and giving of the Magnificat, the song of Mary.

The scripture in its entirety (STOP go read it again now it’s so good) speaks to the power of women listening to God and supporting one another in resistance.

In the story, we learn that elder Elizabeth encourages Mary right from the spot as she says over her stomach: “Blessed are you among women, and blessed is the fruit of your womb.” Unborn baby John leaps on the womb in the proximity to cousin Jesus. It’s a holy moment for sure.

And I tell you, there’s so much to love in this beautiful text, but what has always stuck out to me is the BOLD faith of the women. For:

Though there were a thousand reasons why they could be paralyzed in fear….

Though there were a thousand unanswered questions in their stories . . .

Though the future included grave misunderstandings and hardship for those they loved dearly if they kept going. . .

On that day, Mary and Elizabeth commit together that day to STAY the COURSE.

Mary goes on to sing; “My soul magnifies the Lord, and my spirit rejoices in God my Savior!”

And the words of Mary’s faith song have a lot to say about what is and isn’t close to God’s heart.

Mary sings of how God exalts the most forgotten.

Mary sings of how God is in the business of bringing down the powerful.

Mary sings of how God is always with us, even the most unseen among us.

Mary tells a story that is 100% countercultural to the holiday messages so deeply intertwined into our December narratives.  For, she speaks a word against rapid consumerism and jockeying for positioning and winning at all costs.

She speaks a word against lifting up the rich so that the poor are trampled.

She speaks a word against those with the biggest positions or loudest twitter accounts.

She speaks a word against nationalism at all cost.

Mary’s song blasts the culture with this message: God is not in your noise.

So, I’ve been thinking all week: what would Mother Mary be saying about this new tax law?

Besides just crying tears with us, I believe she’d remind us to keep our chins up. She’d say: Hope. Work. Resist. And pray for more of God’s kingdom to come to earth.

And I believe she’s remind us that God’s favor is never on the side of kings, rulers or any governing body that does not “fill the hungry with good things, and sent the rich away empty.”

She’s tell us not to trust in those who say they love God with their lips but whose actions do not “lift up the lowly.”

And she’d tell us that the most important moment in her life was also challenged because “a degree went out from an Emperor” but yet the light of God appeared even still.

May God have mercy on us and those that are hurt by those our laws hurt in the meantime. And may we keep singing songs like Mary’s. Oh, how we need to hear them!

Birthed One Year Ago
Next Post: What’s Your Word for 2018?