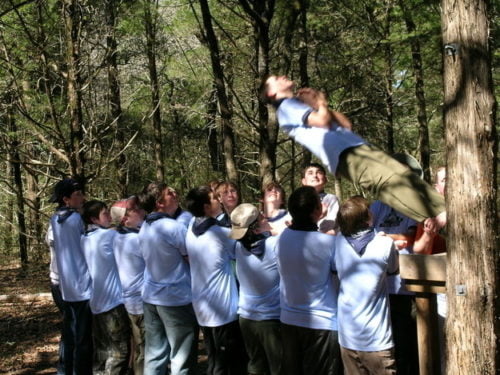 Only when you trust someone, do you begin to really get to know them.

Such was a life lesson I began to learn from all of the youth group trips my parents forced me to attend, beginning in the 7th grade.

Every fall, the motley crew of suburban churchy teenagers and I along with our leaders would board a bus headed for the mountains. Though many of us attended with the hopes of hanging out without our friends, usually our youth leaders would have something else in mind as a purpose of the weekend: group bonding.

I will never forget the fear that came over me as a scrawny little 7th grader on my first fall retreat when I was introduced to the "trust fall." Some of you may be familiar when this activity too from similar youth group memories or workplace retreats.

The concept of the trust fall was simple: each participant in the group would be asked to climb up on a large platform, in our case, built into a tree, and stand with their back to the group assembled below with their hands crossed like this (place hands across chest). The group standing below would lock their hands together to their corresponding partner. And, then, if it was your turn on the platform, you'd be asked to fall backwards "trusting" that the others would catch you.

While the whole activity takes merely a few seconds from start to finish, the emotional toil of preparing for and processing the experience afterwards took much longer. For, as much as I wanted to be the "cool" new 7th grader, I could remember how I felt about being such in a vulnerable position of being held, carried and supported by older kids that I barely knew.

But, after (with much encouragement) submitting myself to the trust of the trust fall, it was a feeling like I was on top of the world. I was learning to trust these new friends.

In our scripture passage for this morning, no matter if they liked it or not, the Israelites were also facing their own version of a "trust fall.”

For since we last journeyed with them last week, as they put one foot in front of the other crossing the Red Sea, in no time, they faced new challenges. For as much as they thought they knew God, they were realizing that the adventure had only just begun. So maybe they didn't know this God as well as they thought.  . . . for life was getting just a little bit scarier than they imagined.

The land they found themselves walking on was somewhere around the Sinai Peninsula, a geographically barren place. Differing from the lush vegetation that the Israelites had enjoyed in Egypt next to the Nile River, the change in scenery meant that gathering basic necessities for life was all that much more difficult.

What were they going to eat?

What were they going to drink?

And as our passage opens soon the Israelites voiced concerns for food in verse 3 saying to Moses and Aaron, "If only we had died by the hand of the LORD in the land of Egypt, when we sat by the fleshpots and ate our fill of bread; for you have brought us into this wilderness to kill this whole assembly with hunger."

If you are anything like me my first instinct is to judge and say shame on them for complaining, but the truth be told, they really did have every reason to share their concerns.

None of them had attended Boy Scout camp and gotten their "how to survive in the wilderness when your leader doesn't even know where you are going" badge.

None of them had gone on a pre-mission trip to plot out the locations where food and water could have been.

None of them had been given any sort of road map.

They were where they were because they were following Yahweh after all, so doesn't it seem fair that a lament to God was in order?

After all laments are all about giving voice, as one theologian writes, "to the human experience of abandonment, suffering, fear and danger. [To lament is to] call upon God to see arise and act."[i]

So, in their laments, they were actually turning toward God in the hopes that in making their requests known in hopes that God actually heard them.

But the thing is about laments, which we know from the times when we make them in our own lives too, is that the solutions we come up with are not always the most level-headed solutions or even the best scenarios at all for getting us out of our predicaments.

When times are hard, we often go for the “quick fixes” don’t we?

For the Israelites, their complaining lament focused on going back to Egypt. They wanted to go back there because even with all of its oppression was a place where they at least knew the rules. At least at the end of the day in Egypt, no matter how hard it was, they earned food by their own hands to put in their mouths.

But here was the turning point of faith—

Put it all on the line and trust God to provide for their most basic of basic needs.

No more trusting in Pharoah.

No more trusting in their oppressors.

No more trusting in themselves.

To know this God, they'd have to first depend on him.

As we continue to read this passage, we see that the provisions come from the heavens-- and no matter if you believe this part of the story was an actual miracle or just some circumstances of chance-- the message is still the same: the ways of God were different from life was in Egypt. 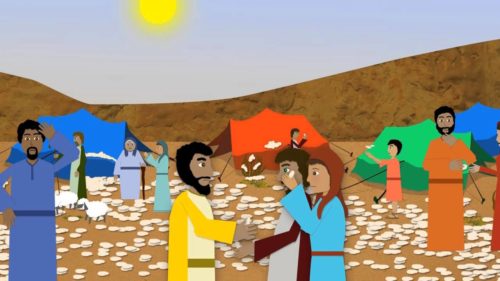 I love verse 15 for this very reason, for when the bread came and the Israelites saw it, they said to one another, "What is it?" for they didn't know what it was. And the actual translation of "what is it?" is the word manna which we know the bread as in our Bibles today.

So, every morning the people gathered the bread and every evening that gathered the meat. They were full. And then they’d have to trust that somehow God would provide the next day too.

What an exercise this was in giving up control! God would take care of them. All they needed to do was go collect the blessings.

How so much easier said than done this spiritual principle is!

A dear mentor of mine, Dr. Joseph Smith was a pastor in the DC area for over 40 years.

He pastored several Baptist churches in the area including being an interim at one point at First Baptist Church of Gaithersburg, MD where I met him as a young associate pastor. He was a good leader. He loved preaching, and he loved people. He was the type of pastor who often worked almost too hard sometimes. His wife Margaret of over 50 years was always encouraging at him to take a break, slow down, stop. But, that was not how Joe rolled.

He regularly spent hours of his time in his study organizing his preparations for anything he was in charge of and always thinking of ways that he could be most helpful to those in the sphere of influence in his life, even when he was said to be "retired."

However, out of nowhere, most unfairly, he was diagnosed with lung cancer, though not a smoker. After chemo and a series of blood conditions developed as a side effect of his treatment, Dr. Smith was weak and fragile only taking baby steps around his house with a walker. The man who had gone and did some more (more than anyone ever asked him to do) was now left to trust family and friends who could look after him.

Sadly within months, cancer took his life. I was so honored that he asked me to be one of the speakers at his funeral.

Yet, in one of our last correspondences with each other he wrote me about how hard it was to be the one in need of the visit instead of being the pastor making the house calls. He told me how much it ached him when he no longer had the energy to be the first one to reach out or contribute to the care of others. He hoped people would not forget him in his time of need. The feelings he shared were a modern version of a lament of how hard this trust stuff is for all of us—even us “professionals.”

I don't want to be one of those preachers who stands here before you this morning and says that God sends onto this planet drought, famine, life-shattering illnesses like cancer in order to teach us how to be dependent creatures.  Sounds too much like a sick plan of an abusive Father, rather than a loving God to me.

But, what I do know is that God wanted my friend Joe to know the joy of provision even in the last days of his life. God would take care of all of his needs.

And, God wants the same for you too.

And it’s true, sometimes the only way you and I are going to learn is by going into the wilderness—a place where we can learn about who God really is when everything comfortable is taken away. And it is there that God who says to us, “I hear you, I see, you and even if the provisions I provide look like manna ("what is it?") still you will be nourished. Still you will be full.”