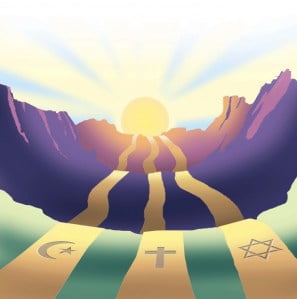 Yesterday, I got this email from the ADAMS Center (All Dulles Area Mulism Society) in Sterling, Virginia of which Washington Plaza Baptist is a friend. As you might remember last January, Kevin and I traveled to Israel in support and friendship of Imam Magid of ADAMS.

What troubles me most about this email is that the state of religion in our world in general is that this email needed to be sent at all. We assume that every Muslim is the same, that every Jew is the is same, and that every Christian is the same. And, thus, when one Jew, Christian or Muslim acts up, all people of that religion are to blame.  I am proud to have friends in these faiths and others and support all well-meaning religious devotees . And, I want to add my name to the list of those who love and support my Muslim friends.

Washington Plaza Baptist along with Oakbrook Church and Northern Hebrew Congregation will be hosting an Interfaith meeting, talking about the book, The Faith Club, on January 18th at 7 pm. Our friends at ADAMS have agreed to host. It will be a great chance to continue to grow in friendship and peace so that more of these emails don’t need to be sent in the future!

In the Name of God, The Compassionate, The Merciful

The All Dulles Area Muslim Society (ADAMS) condemns the terrorist crimes against humanity in the Christmas Day attacks on  Christians Churches in Madalla, Jos, Kano, Damaturu and Gadaka in Nigeria.  Our hearts, thoughts and profound sympathies are with all the victims of these horrific acts, and with their families.   We urge the Nigerian government to take all measures to prosecute all those responsible for these heinous crimes, swiftly and to the fullest measure.   We pray for peace between the Muslim and Christian Community in Nigeria, and must work together to help bring about that peace, and an end to terrorism, extremism and conflict.

We are especially troubled by these events since ADAMS had in October hosted an Interfaith event featuring two Nigerian interfaith icons, Imam Muhammad Ashafa and Pastor James Wuye, two former Nigerian militia leaders turned peace-makers who have spent several years trying to bring an end to such warfare and conflicts in their home country (http://www.adamscenter.org/announcements/The__Imam__and__the__Pastor)

“It is a sad day for all people when a simple act of worship or community celebration is marked by violence and innocent deaths”, said Imam Magid, ADAMS’ Executive Director.  “We therefore ask all Muslim community members and organizations in Nigeria to lend support to the families who lost loved ones during these attacks, and we urge American Muslims to join them in praying that God may ease the suffering of all those affected by this terrible tragedy.”

As Islam holds the human soul in high esteem, we consider any attack against innocent human beings to be a grave sin.  ADAMS has consistently and clearly stated that those who commit acts of terror, murder and cruelty in the name of Islam are not only destroying innocent lives, but are also betraying the values of the faith they claim to represent.  No injustice done to Muslims can ever justify the massacre of innocent people, and no act of terror will ever serve the cause of Islam.  ADAMS and all its members therefore repudiate and dissociate ourselves from any Muslim group or individual who commits such brutal and un-Islamic acts.  We refuse to allow our faith to be held hostage by the criminal actions of a tiny minority acting outside the teachings of both the Quran and the Prophet Muhammad, Peace Be Upon Him.
PEACE,
Rizwan Jaka
Board Member & Interfaith/Government/Media Committee Co-Chair, All Dulles Area Muslim Society(ADAMS)