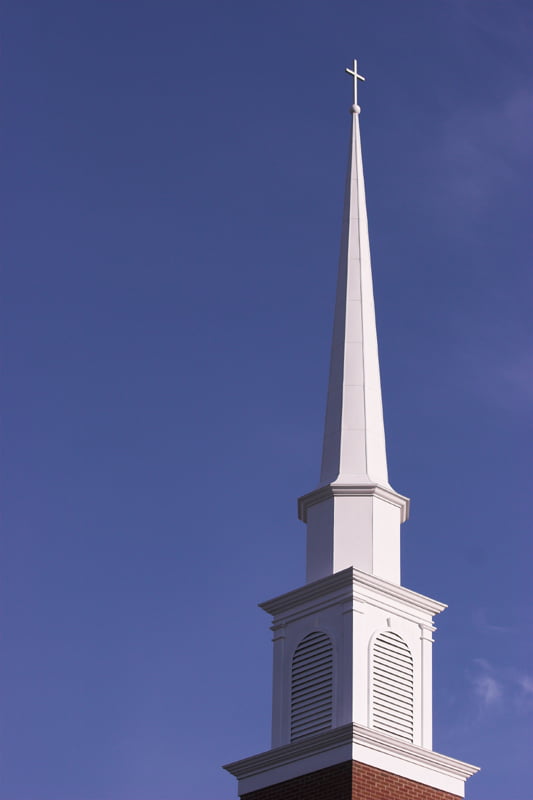 I hear it from clergy all the time: it’s hard to worship when you are leading others.

One of the joys of my Sabbatical time so far has been the opportunity to visit to other churches and consider again what church means to me as a participating worshipper.

But learning how to be a worshipper is harder than it might seem.

On this past Sunday morning I found myself at a big steeple church with a friend in my hometown in Tennessee. It was her home church and for this reason I was glad to go alongside.

But, when we pulled up to the congregation sometimes known in the community as “fortress,” I was a little afraid.

And rightfully so. I was back in church compound land. Such a big model of doing ministry is not what I believe the church is nor is how I’ve I practiced it in years.

Was I going to have to make small church talk with strangers around the coffee pot before church? Was I going to have to sit in a classroom circle staring at other well-dressed folks who appeared to be more excited about study than they actually were? Was I going to want to pull my hair out at the fluffy theology coming forth from the lips of leaders? None of these are my favorite things, as you might imagine.

Furthermore, fear came up in me because I’m not a fan of churches without a lot of racial diversity. (We need our churches to LOOK like the Body of Christ.) I’m not a fan of churches that don’t include voices of the poor (I mean, what is a good service without a distraction from a homeless person coming in?). And, I know a church is not for me if the American and Christian flag are proudly displayed in the sanctuary (Can I say idolatry of nationalism has no place in God’s house?). Most of all, I want to know that when a church says, “We welcome all” they really mean it. I want to know that a church’s doctrine doesn’t hurt people.

But, then we arrived. Ready or not, I went.

Getting out of our car, I gazed up at a large dark stoned building that takes up several blocks in the neighborhood. It almost felt like something out of one of the Harry Potter movies as I walked through wood carved archways inside to get take a flight of stairs down to a well-kept Sunday School classroom. Asking questions on the way in, I learned that the membership is mostly made up of those who would be named as upper middle to upper class folks– at least 2,000 in worship on Sunday. And most of it members are white– even though some of the young families have adopted church from other countries. And there is one paid African-American soloist in the choir. Need I say more?

I could have easily spent the next two hours rolling my eyes and thinking “better than” thoughts in my head.

But, I have to confess– I was wonderfully surprised.

Walking into Sunday School– a room filled with well-dressed, well-to-do looking folks, about 20 of them in all, with a woman in a black sweater, red beaded necklace, pencil length grey skirt, and black boots standing behind a pulpit on a desk, I found an open mind. We sat in rows not a circle. And then, what came forth from this teacher’s mouth was well-prepared, engaging truth from the Word.

I almost had tears well up in my eyes at several points as we discussed the passage from John 5 about the man whom Jesus asked, “Do you want to get well?” (Have there been spaces in my life the past six years when someone has taught me on a regular basis? No. Man, this has got to change, I thought. ) As I continued to listen, the teacher read commentaries from some of my favorite Biblical scholars, one in which I’d even known in seminary. The class members shared a richer theological discussed than I’d experienced in such a church in years. I found myself saying in the midst of the discussion, “I guess this is why people actually come to church– they’re hungry too to learn about their relationship with Christ.” Because I did. I left refreshed.

Later in the service of worship, though the number of white faces were many and the flags hung beside the steps up to the altar, I tried again to not be so snobby. And, tears found me again. We sang robustly the great hymns of faith with the kind of full voices only a full sanctuary with pipe organ can. I found beauty in the liturgy of the prayers. The choir proclaimed a sacred piece that stilled any unsettling in me. The preacher, though an older white man, read and proclaimed the Word with jewels of encouragement. And, throughout the service, I felt the warmth of those around me– many of whom I’d met before while visiting once before– folks who remembered me, asked genuine questions, and talked to me about their prayer life.

I left with a conviction of my heart. One I’d been thinking about for a long while– we’ve got to be less judgmental of each other in the Church. Pastors like me need to stop being church snobs. The Spirit of the Lord is not always in the places we expect. God’s presence is in all black churches and all white churches and rich churches and poor churches. Church doesn’t always have to be just the way we like it for worship to happen. Where the Spirit of the Lord is, there is freedom.

I know this again full well.

But, in the meantime, can the church be the place where God’s presence dwells, where lives are transformed and where individual faith can be nourished? To all of this, I say yes.

I confess, I’ve been judgmental a long time. This Sabbatical time is asking this ugliness in me to change. And, most of all this Sabbath is asking me to worship from the pews. And most of all to listen.