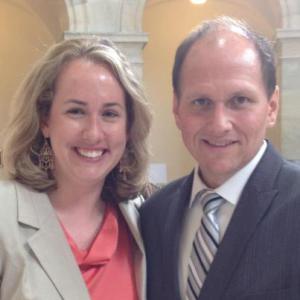 There are some days in life that simply amaze you. Yesterday was one of them for me.  I found myself on the floor of the Senate praying the opening prayer of the day as the guest chaplain via invitation from Chaplain Black after a nomination from Senator Jim Webb of Virginia.

It was a humbling honor, especially as I learned that this is only the second time in Senator Webb's six-year tenure that a pastor he has nominated has been selected. But, why me? I am by no means a pastor of "large" church in Virginia. We are small but mighty at best. I am still young in my vocational career and by no means a seasoned pastor with 20 or more years of experience. I could have thought of dozens and dozens of other clergy leaders more qualified for such an opportunity. However, it seemed to me to be a case of being in the right place at the right time and God doing what God does best: surprising us all.

Almost a year ago now, I filled in as pastor of a wedding. It wasn't just any wedding, but for my husband, Kevin's former roommate, Trevor. Trevor was 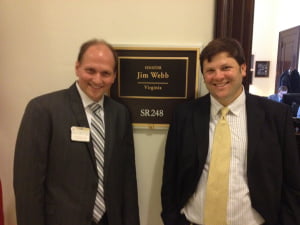 marrying Traci and we were scheduled to attend as guests at this out-of-town event. Trevor and Traci asked me to pray in the service. Senator Webb, Trevor's boss, as he now works on the hill as the Senator's Chief Counsel, was to lead the ceremony. However, due to the budget crisis of last summer and the potential government shut down, the Senator could not leave town. And so the week before, I became the minister solo. It was a fun day for all and great material for opening remarks that I did not look like the Senator (who was listed in the program).  I was glad to support our friends at this important life event as weddings are just a part of what pastors do.

A couple of months ago I got an email from our friend Trevor asking if I would like to offer a prayer on the Senator floor as a guest chaplain. "Sure," I said, not knowing much about the process or even if it would come to be. There was concern from the Senator's staff that my nomination, even if it was accepted would not make it through the process before Senator Webb's term ended this year. I really didn't think much of it at all, while thankful for the Senator and my friend's kindness.

Then, a week ago, I got a call. The phone rang at the church and the caller ID on my phone said, "US SENATE."  What? It was no joke, but was Chaplain Black's Chief of Staff. Saying: "We have an opening for a guest chaplain next Thursday. Can you come?" Eagerly I said "Yes" and called Kevin right away hoping that he would be in town to come with me. And, he was! This would be something we would get to do together. How cool!

Then, yesterday, as we arrived, I learned that it has only been in the last 10 years that female clergy have been invited onto the floor to pray. And I got several jokes from the staffers how they knew they were getting old when "The guest chaplains look like teenagers." But, nonetheless, I was there.

Though I am not the type that says things like, "Everything happens for a reason" (because life just isn't this simple), I was truly tempted to say this yesterday. Because our visit to visit to Capitol Hill felt like a "such a time as this" sort of moment that we couldn't have dreamed up if we tried!

As many of you know, Kevin is now working as the CEO of a large non-profit called, Feed the Children, a large international organization that feeds over 350,000 families in the US each year and 350,000 school aged children in 10 developing countries around the world. As you can imagine, there are natural connections to the great work Feed the Children does to what goes on Capitol Hill. 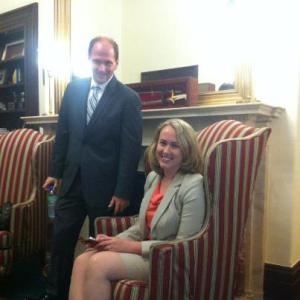 And so what an opportunity, Kevin had to say, "My wife is going to be the guest chaplain for the day" to enter into some get-to-know you meetings with some of the influential law makers that could potentially substantially increase the number of children and families that receive help from feeding programs around the world. We had some great conversations with senators and staff and I am thrilled about the future of Feed the Children's work and some new supporters who will help them further their mission of "no child going to bed hungry." Doors were opened yesterday for ongoing conversation and friendship which is never a bad thing.

In the end, I fully recognize yesterday was not about me. It was about being a vessel of the work that God has prepared for us to do: Kevin and I together. And, I just showed up and did my part, hoping that the outfit I picked out would have made my beloved fashionista Grandmother (God rest her soul) proud.

One of my favorite scripture verses in Ephesians 3 says, "With God's power working in us, we can do more than we could ask for or imagine." To this I say, amen, feeling as though our day of "Hagans on the Hill" was an amazing gift of scripture lived out in front of our eyes. It's a happy place to be when you say with your life, "God, surprise me." Because God will!