When is the last time you were really searching for something? Can you remember the last knock out, drag out all of the couch cushions, search every cranny of all of the drawers, crawl under the bed, call lost and retrace your steps until you are exhausted—all in pursuit of something meaningful to you that you simply cannot find anymore? 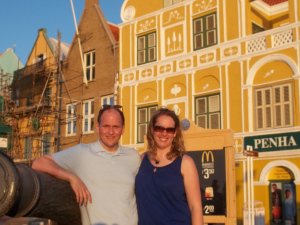 Yesterday, I was on one of these crazy all-consuming searches that gave the meaning of “coming home” for homecoming an all new meaning. After a week off for vacation, I needed to get home for church this morning.

For those of you who travel a lot, you know that the goal is to always be prepared for anything and to have your plans flexible at all times for you never know what might happen to you. And, as Kevin and I boarded the shuttle that took us from our hotel to the airport at 5:30 am, we were believed we’d  be home from our week of vacation in Curacao (an island next door to Aruba) by late lunchtime and all would go as planned.

However, soon after we got through the long line at the ticket counter, through security and immigration and were patiently waiting for our plane to board at the gate, we got those dreaded five words that any traveler hates to hear: “Your flight has been canceled.”

We were crushed with frustration especially as we learned the only reason our jet would not board was because a flight attendant was not feeling well and they couldn’t fly without her. We were told to go get our bags, leave the terminal and go stand back in line to re-book our tickets for flights that were seemingly non-existent. (American Airlines is not my friend).

I had homecoming on my mind and how important this day in the life of our church was, I couldn’t be stuck on the island, I kept saying to Kevin. . . So, I dashed back to the ticket counter to stand in the long line already forming, hoping God might smile on my travel karma just a little.  Even as tech savvy travelers around me crumbled while looking at their blackberries and I said, “I bet we won’t get out of here for a couple of days, the next couple flights back to Miami are booked” I was determined to search—to find a way to get off the island and at church in the morning.

The series of events in this search were nerve-racking from the beginning.  From Kevin calling the airline only to get the news that we were re-booked to arrive home on Sunday night (not cool), to moving our hopes to  the local airline which boasted of a flight to the US in a couple of hours, to standing in their new long and disorderly lines, to being told by one ticket agent when I finally got to the front of the line that there was one seat on a flight out-of-town for the morning, but  . . . with the catch that I couldn’t buy it there.

I was told that: I’d have to find the airline rental car shed ½ mile away, only to arrive out of breath (I was running in jeans) with the message of: the seat on the flight I was promised was taken.

BUT I could be on stand-by if I walked back a mile and a half back to the ticket counter for another 30 minutes, to then learn finally that there was a seat available (yes, finally some good news in the search!), but then to be told, I would have to go back to the rental car shed (1/2 mile a way but felt more like 2).

There I finally did buy the ticket to the USA to then be told to go back and stand in the ticket line (again) so that the boarding pass could be printed. Only to learn when I got back to the ticket counter that the flight was getting ready to take off and wanted to leave me. Luckily, with some persuasion by Kevin, “Sir, my wife is a pastor she has to get home today (though in this Roman Catholic country I know he was confused as to how I could be a pastor)” the search to get off the island ended as I ran like a crazy woman through customs again. Thank you Jesus that I was on a flight that I hoped would bring me home (though Kevin wasn’t as lucky will probably arrive home later on tonight with his own version of his “In search of” story).

I still think it is a miracle I got off the island. . .

Looking forward to a less eventful week than has this one began.