On Monday, November 4th, I celebrated the 7th anniversary of my ordination.

Seven years ago this week, I stood at the front of a church– Calvary Baptist Church in Washington DC and said to the congregation gathered of family, friends and congregation members that I would serve God in my vocational pursuits. I said I would set aside personal interests for the sake of the community of Christ. I said I would seek to embody, teach and share the gospel with my life. I said I would do all of this for as long as I lived. 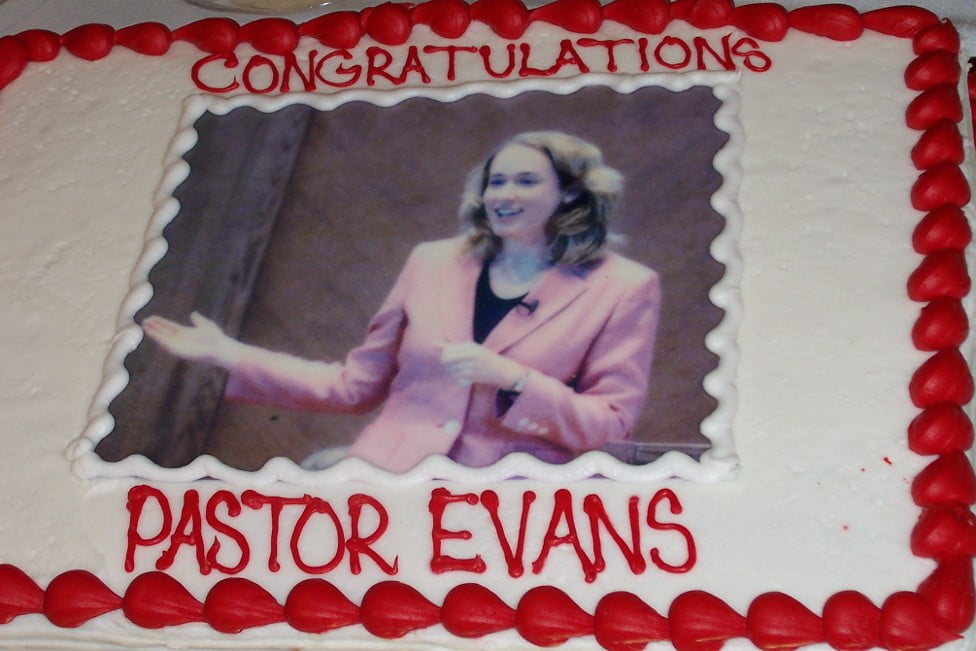 After the service, we gathered in the church social hall and ate sausage balls and cheese dip among my other favorite snacks made by my future mother-in-law. There was a cake with a picture of me preaching with a huge, “Congratulations, Pastor Evans!” on it.

A big day all around.

The night before the service, I sat upright the in bed lounging with my closest girlfriends who came into town for the celebration (Baptist ordained pastors as well) trying not to be so anxious.

Over a bag of chips on top of the brand new white comforter I finally had the money to buy in my first post-seminary job, I recounted to them my deepest fear about the hours to come.

It wasn’t about the music going awry.

It wasn’t about the having to kneel for so long at the front of the church without my legs falling asleep as people prayed prayers of blessing over me.

It wasn’t whether or not I’d be able to pray the benediction as I’d planned to say without being too emotional.

I was having pre-ordination jitters; the kind where I really knew that this moment in my life was a really big deal.

And even as my pastoral support girlfriend team sought to calm me down saying that my life wasn’t really over. They said things like, “You’ll still have fun. . . We’ll make sure of that. Being ordained doesn’t make you any less human.” There was part of me that felt the weight of the shift.

It was like I was getting married to God. I had one last night of freedom.

And though I had done everything I could to finally make it to this day– the improbable feet as a Baptist woman in ministry getting a Reverend in front of her name– when I stood in front of the altar on November 4, 2006, the relationship of God and I being in an more intense partnership was never exactly what I envisioned it to be.

This would be no easy marriage.

Though I’d grown up with a pastor for a father and knew all the social expectations that came with the title, to be the Rev myself was entirely new. Because all of the sudden the expectations didn’t just come with my family name but it was what I’d chosen.

I’d chosen to be the one who would be asked to publicly pray more than the norm.

I’d chosen to be the one who would be asked to stand the gravesides of the grieving, the bedsides of the sick and on the doorsteps of the bewildered seekers.

I’d chosen to be “on call” 24-7 when pastoral emergencies arose in a congregation.

I’d chosen that when the day came that I was legally married to a man that he’d be the kind of man that also supported the marriage I’d been pursuing long before we’d ever met.

But as is with most marriages, as it was with my ordination, it was not a one-sided deal.

God long before had chosen me.

Not that I was more special or “called” than others with different kinds of work, but that this was my path to walk with God.

In this new relationship that God and I would share together, greater discipline and sensitivity to the Spirit would be required.

No longer could I ever assume that my faith was for my own edification alone, but was for the blessing of my community.

No longer could I act as though I didn’t need community, for as much as they needed me, I needed them.

No long could I live in such a way that forgot the day that God and I got married– for if their ever came a time when I felt like a new vocational path was given to me– I’d need to release this marriage in a public way just as it was given to me.

Being married is a long-term commitment.

Seven years ago it all began. Together God and I are still on this journey.

Hitting the Plazas of Nashville and Honolulu
Next Post: Teachers in the Philippines