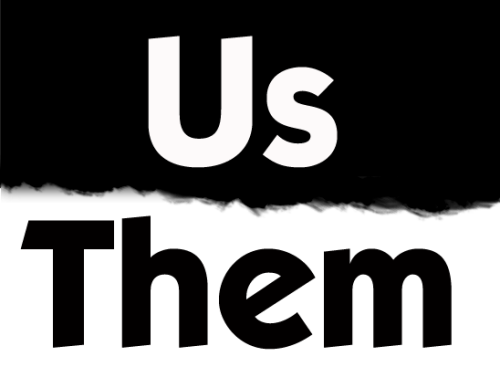 Recently while in the religion section of Barnes and Noble, I found two books in that struck me indicative of America at this juncture.

We buy books like this from whatever camp we find ourselves in because it’s so much easier (and fun) to surround ourselves with people who think exactly as we do, right?

And this is where the wars of words begin:

And us, religious types are the WORST. We love a good game of us vs. them.

The “them” side isn’t as enlightened, or as smart or as representative of the true faith like we are. We stake the claim of the divide with statements like this-

You believe the Bible is without errors. But we believe it is full of them.

You believe all religious paths lead to God. But we believe in Jesus is the only way to God. (The list could go on and on)

And we de-friend both in real life (and on Facebook) once we see the side people fall on.

But what happens when you meet someone who is a “them” who is smart, kind and respectful instead of a monster perceived to have five heads?

Such happened to me recently and it really surprised me.

I met a new colleague. Though we both profess the Christian faith, we’re a unlikely match. But now I call him my friend.

He likes to go on mission trips for the sake of evangelism. I don’t feel this is the best use of my resources.

He likes telling me about his prayers using specific scriptures. I am not one to be showy about how I pray for people.

He chooses to live in part of the country where Christian churches are the norm. I prefer to be surrounded by diversity.

But as I’ve gotten to know this colleague, I’ve seen his heart. I’ve watched him give and give of his resources to others. I’ve received comfort from his beautiful prayers for me. I’ve found nuggets of common ground in our theological conversations.

Slowly, he’s less like “them” and more like someone I would include in the “us.” Shocking even me.

But, this is what I know:

We’re both are children of the same heavenly Parent.

We’re both bearers of divine light (even if I still think my choices are the best ones for me).

And he’s challenging me to see God beyond the walls of my own bias.

I’m reminded of one of my favorite Anne Lamott quotes: “You can safely assume you’ve created God in your own image when it turns out that God hates all the same people you do.”

This is why the us vs. them wars never work and can’t be our norm practice if we want to live in peaceful corners of plant earth. God is always in the business of surprises. 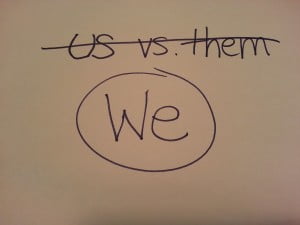 This does not mean that there isn’t a time and place for speaking truth to power and movements for justice but . .

Our best energy, my friends can’t be used up in fortifying ourselves for battle with them.

We’ve got more important work to do! Feeding the hungry, seeing the unseen, uplifting the lonely. Work we can do together.

9 Years as Rev. Elizabeth
Next Post: The Danger of Certainty