A sermon preached to celebrate All Saints Day on Hebrews 11:29-12:2 at the Federated Church, Weatherford, OK 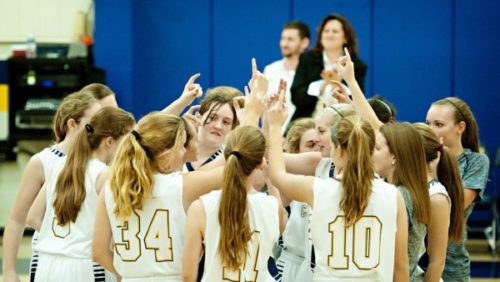 I shocked my family when in the 7th grade I informed them one evening after supper that I was going to try out for he girls’ basketball team. They were surprised at my declaration because I’d never shown any interest in organized sports. Nor did I have an affinity for sweating (I hated playing outside). Also I didn’t know the rules. And I could not shoot a free throw without stepping over the line.

But, somehow, someway, I made the team and with much enthusiasm sat on the bench for the Chargers wearing number #24.

Our team, though full of spirit wasn’t great at scoring. We lost more games than we won. But what we did have going for us were our fans. Basketball was a big deal and folks loved to come to even the middle school games. Our fans were loud. They were energetic. And they really wanted all of us to do our best.

I remember during one of our last regular season games at a pivotal moment—a game we had a good chance of winning, the coach called a time out.  As we huddled up he told us, “Look over there at those people in the stands. Do you hear them? Do you hear what they’re saying? They believe in you. They’re cheering you on. They want you to win. They know you can. So go play your best!”

I can’t recall whether or not we won that game, but I do remember the feeling of pride my teammates and I had that day—as we looked over at the stands, we heard a crowd of folks cheering us on.

We were loved and supported. What a hope-filled memory that remains with me still to today.

Likewise, if you’ve ever had an experience like this of being reminding that a group of people have you back and were cheering you on—you’re in perfect company by time you get to Hebrews chapter 11. For it's a word of exhortation about standing strong thanks to a very large cheering section.

The letter to the Hebrews, written by Paul (or maybe not) is a complicated book. It even has some of the most complicated Greek in the New Testament so much so that when I was in seminary our professors said wait until you’re super advanced to try to translate it.

But by time we get to chapter 11 in the book, the message becomes a bit clearer.  We find the popular “by faith” litany that begins with this definition of faith: “Now faith is the confidence of things hoped for, the assurance of things that we can’t see.”

And then in response, we read of character after character throughout scripture, familiar names who have been champions of the faith. Characters such as Noah, Abraham, Sarah, Jacob and Moses—who all acted with courage, believing in something, in someone guiding them beyond what they could see right in front of them.

And God called their actions FAITH.

We’re reminded in verse 31 of how an unlikely woman, Rahab, a prostitute becomes the hero of the story as Joshua and the people seek to settle into the Promise Land. She welcomes the scouts into her home, providing hospitality to strangers. Rahab acts in faith.

And then the Hebrew writer adds, “What more shall I say?” Remarking as we do when we don’t want to belabor a point: “I could go on and on but I won’t.”

Or in other words— the Hebrew writer says, I’ve shown you through examples after examples of what faith looks like when it’s embodied. Do you hear me? Are you listening?

Hebrews 12:1 says: “Therefore, since we are surrounded by a so great a cloud of witnesses, let us also lay aside 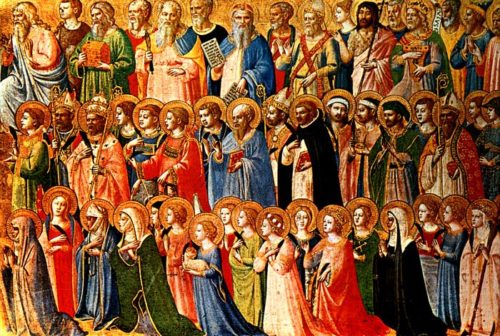 every weight and the sin that clings so closely, and let us run with perseverance the race that is set before us.”

What words are these! Let me repeat them again: you are surrounded by a GREAT CLOUD of WITNESSES.  Let us run our race with perseverance. Let us run the race set before us—the race Christ gave us to run.

It’s another way of saying to us readers, you’ve got a calling that’s greater than yourself. Not only because it comes from God but because it’s connected to all the saints of the church.

Maybe this is why 10 years ago on Thursday, November 4th, the day I was ordained to the ministry, I selected this passage to be the text for my ordination sermon.

There was fear in my bones that day. I was about to commit my whole life to vocational ministry. I knew from that day forward when people met me and found out there was a “Rev” in front of my name they’d think differently of me. I’d have to be ready to ask a thousand questions about my life when anyone asked me what I did at a party.  I remember confessing the night before the service to several of my fellow preacher girlfriends—who’d already walked the path of ordination with my most dramatic voice (I’m sure), “I fear my life is over’ (with a deep, deep sigh).

But, as these words were read on November 4, 2006 they told me that first of all my life was not over but the adventure was just starting.

In faith, God was going to lead me place I’d never be able to imagine if I tried to dream up. 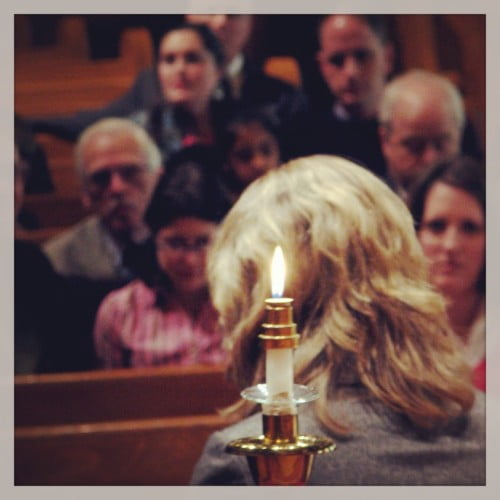 And most of all, the calling I was saying yes to came to me “surrounded by a great cloud of witnesses.” Both in heaven and on earth, I had a cheering section.

Today, is All Saint’s Day—a day the church universal sets aside once a year to remember those of the faith who have gone before us. It’s a celebratory time to mark the spiritual connection between the church in heaven and the church on earth.

In the Protestant churches we don’t do as good of job of celebrating this day as some of our Catholic brothers and sisters do around the world in places like Mexico where All Saint’s Day coincides with the first Day of the Dead, a colorful festival that remembers all the deceased infants.

But for many All Saint’s Day is one of their favorite occasions of the church year because it’s so easy to come up with a list of names of people who are no longer with us, but saints that we experienced among us. Without their influence on our individual lives and the life of our churches, we would not be the people and institutions that we are today.

These are people who like Hebrews 12:2 speaks of have “look[ed] to Jesus the pioneer and perfecter of our faith, who for the sake of the joy that was set before [them]” modeled their lives after Christ’s cross. They loved big, even when it cost them. They were willing to not just speak of their faith, but show it with actions too.

On that night before my ordination that I was fretting about the future, my never too serious seminary best friend, Abby pulled out a gift she made for me from her purse.

At first glance it looked like a stole. I got excited right away. For years, in my want to be a preacher dorkiness, I’d looked forward to the day when I could finally wear one as a full-fledge clergy person. But while it looked like a stole it was actually a long white scarf that I guess could be worn as a stole if I pretended. Yet, what was most unusual about this scarf/ stole were the faces Abby had ironed on to the both sides.

Some of the faces were beloved youth ministers or camp leaders we both knew. Some were of our favorite professors that we’d learned so much from. But then some of the faces made me laugh.

One was of the popular contemporary Christian singer from the mid-1990s called Carmen. Have you ever heard of him? (If not, you’re not missing anything). His most popular song was  Mission 3:16.  If you want to see what a character, then google it and you’ll get a good laugh.

Then another one of the faces that surprised me on my gift was of Bobby Welch—the Southern Baptist Convention President in 2005 who lead a bus tour coast to coast as part of his presidency with the goal of “Witness, Win and Baptize 1 million souls” in a year. Both Abby and I had happened upon a video of his preaching that horrified us but also made us laugh hysterically when he fell out with an American flag in one hand beating the stage with the flagpole saying, “Souls, Souls, Souls. We must win souls.”

My family tree of saints was indeed colorful.

I’m not sure if Abby had this larger objective in mind when she gave me this iron-on gift with some very special additions, but as I pull it out of the closet from time to time and look at it, I’m reminded of the great cloud of witnesses, the saints of the church that is pulling me forward, that’s saying “Keep running the race.”

Even the unique saints on my gift have something to offer.

And what a hopeful message this is for all of us today.

We are not alone. We've got a great big ole fan club. The saints are cheering us on.

My only question is: do you hear them?