Yesterday, I began a series of messages sticking close to the I Samuel lectionary texts– a series which hopes to expand the Biblical literacy of the congregation– really getting into the stories about Israel and come to understand more of the character of God.

Here’s an excerpt from yesterday’s sermon which focused on I Samuel 8:4:4-11, 16-20, the time in the life of Israel when the elders came to Samuel asking him to appoint for the nation a king. Here’s some background: 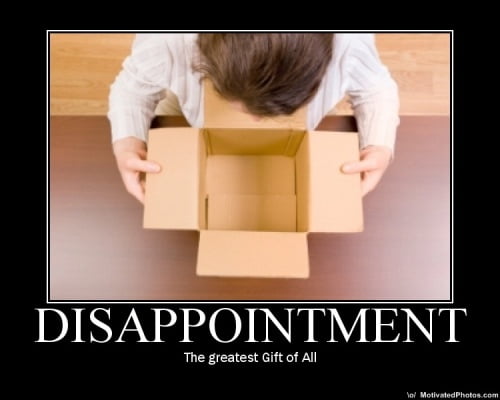 … If we read earlier in the book of I Samuel, we realize that the nation of Israel is not in a time of complete peace and prosperity. No, their arch enemies at the time, the Philistines have been at it again.  And the Israelites face much defeat.  So in an effort to be on the winning side again, Israel’s commanders think that if they just take God, literally with them into battle that they will finally will be victorious, the ark of the covenant goes with them. But, the precious ark is stolen. Though later returned, this whole experiences leave the nation as a whole feeling unsecure and afraid. But, most of all, feeling disappointed.

God let them down.

Sure, the people of Israel were known to make mistakes from time to time, but weren’t they doing the best they couldn’t? Sure, they weren’t perfect or claiming to be, but why was God acting this way?

And, at this juncture of the story, you and I, all know this pain all too well. We have too felt disappointed by God in our lives, if we aren’t feeling that way even right now.

We’ve been disappointed at God as we’ve prayed and prayed till our knees have grown weak and weary about a real need in our family, and still seemingly nothing changed about our situation.

We’ve been disappointed by God when we thought we heard God speak to us at some point about a very specific thing that would occur and we are still waiting 10 years, 20 years, even 50 years later with nothing seeming to ever happen.

We’ve been disappointed by God as we have found ourselves in situations that have made us feel like we unfairly drew the short end of the stick in life’s lottery– we are 45 and still single without a desired life partner; we are 55 and have no savings for our retirement after experiencing lay off after lay off in our younger years; Or, we are 75 and widowed forced to plan our retirement years we once looked forward to alone.

We have been or are now disappointed with God because we’ve expected more from God than God has ever provided for us. We begin to wonder if God is not so great or good after all.

“Aren’t I a good person?” We wonder. “Don’t I deserve some of life’s greatest blessings like everyone seems to get so naturally?” We shout at the sky. “Don’t I deserve a life better this, come on God, really!” We proclaim.

And, as usually is the case when we are disappointed with life– we do two things. We either grow bitter adopting a permanent woe is me look on our face. Or, we try to fix the problem ourselves. We move to action– asking for a completely different course of action.

In the case of the Israelites, we don’t see them rolling over to play dead in their disappointment, we see them moving to action– going to Samuel and saying in verse 4, “You are old and your sons do not follow in your ways; appoint for us, then, a king to govern us, like the other nations.”

“We’re disappointed in God, Samuel,” they say. We’ve had a good run of things with you, but let’s face it, God is about to completely let us down, even more so than we experienced while in battle with the Philistines because your sons are corrupt. So, fix it, Samuel. Make it better. Give us a king. Give us a king so that we can be like everyone else. Give us a King so we can feel better once again.”

And while commentators of this passage often disagree on who’s right and who is off base in this passage (after all, you always have to read Old Testament narrative through the lens of yes, we are hearing God speak, but he is speaking through human voices)– was God being unfair OR were the people being completely disobedient?

But no matter what answers to these questions– it doesn’t change the experience of deep disappointment with the divine that Israel faced at this time.  After all, don’t they say in business management courses that perceptions of people are reality?

But, this is what we know as we look at the long view of Israel’s history though at this moment, the people might have felt abandoned, left alone and failed by the One person who promised never to leave them, there something else that is true. And that is that God has not left them or forgotten them.

One thing that my spiritual director says to me all the time as I am wrestling through a particular issue in my life is that while I may be fixated on one thing it doesn’t mean that something else is not simultaneously true as well.

That, yes, it is true that in many situations of our lives we might feel lost; we might feel abandoned; we might feel disappointed in God.  (And, all of these are valid emotions full of grief that it is ok to feel and to sit in for a while if we need to). But, such does not change the fact that it is also true: God has not now nor ever will  forget us. While we may feel like God is distant, God is still present among us. “God will never leave us to face our perils alone” says the theologian Thomas Merton.

If we see how God continued to work in Israel’s life as a people, we know that the ups and down tales of disappointment continue, but never less, God never gets to a point when God says, “I’m just finished with you. I can’t take it anymore. I’m through with you. I’m throwing you away”

When God disappoints us, what then are we to do?

When in college, I sang with a gospel choir with a student director with as much enthusiasm as Whoopi in Sister Act movie. Though I don’t remember a lot about the songs I sang after all these years, I do remember one song that was a crowd favorite anywhere we went called “He’s Never Failed Me Yet.”

The climatic ending was repetitive chorus of “He’s never failed me; he’s never failed me (with a dramatic) yet.” Our choir director was always about a strong staccato ending so much so that this line has always stuck with me. Though the rest of the song contained beautiful lyrics like:

I will sing of God’s mercy,

every day, every hour, He gives me power.

I will sing and give thanks to Thee

for all the dangers, toils and snares that He has brought me out.

He is my God and I’ll serve Him

no mater what the test.

Jesus will surely bring you out,

It always seemed like such a strange ending to a song that was so confident, so faith filled, and then we had to go and throw on a “yet” at the end. I’ve often thought about that yet, wondering about why it was there. Seemed disrespectful or as if we were putting God to the test. As if asking the question if one day God was going to start failing us.  Wouldn’t that be against everything we believe about our Christian faith?

But since then, these words come back to me sometimes in the shower or in my car and I’ve lived more life, felt more of life’s pains and life’s deepest wounds, I’m so glad that the “yet” is included. Yes, it is good in our most disappointed moments to acknowledge that God has never failed us, but we are human after all so if we need to add the word “yet.” And I think this is just fine. Part of living the life of faith is staying with the “yet” long enough to let God be God and all that this mystery means.

In our disappointment history with our God, sometimes, I know it is hard to keep believing again and again to trust that all will be different as our story goes on.