Yesterday, we held our second deacon ordination service in the tenure that I’ve been pastor here. It was a great celebration service to welcome Marie 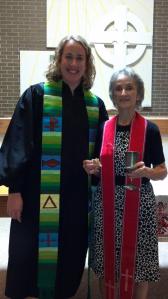 Mercer onto the deacon ministry team, and a good opportunity for us as a congregation to remember why it is that we call servant leaders out in our churches. When we held our first deacon ordination service (in over 20 years!) in November 2010, the church body as a whole was a bit skeptical, I believe of this type of ordained leadership but I think what the congregation has experienced since is delightful surprise. We are blessed by our deacons at WPBC!

There’s nothing like a good church fight to get God’s plans for a community moving in the right direction, isn’t there? Well such was the case as we look into our Acts lection for this morning. The beginning of the first deacon ministry came out of a church fight.

Though when many of us think of the title of deacon, nice and hallowed images come to mind of saintly folks who serve in leadership positions in churches, the role of deacon within the church community evolved out of a conflicted situation that only some attention to administration could fix.

The church, as it began, was centrally located in Jerusalem and new believers to the family of faith emerged almost daily. Everyone shared their possessions with one another. Powerful healing and teaching regularly existed as part of daily life.  Yet, found itself at a moment of crisis: not everyone got from the community what they most needed.

When communities of faith are filled with diverse people, we know that conflict is inevitable. And, the community of believers in Jerusalem had never been homogenous from the start. Remember that the day of Pentecost occurred on a day, afterall when faith Jesus gathered from all parts of the known world at the time, speaking more languages than just one. In summary, some members of the community spoke Greek, others Aramaic. Natural barriers led to patterns of poor communication, mismanaged expectations, and unspoken resentments. Specifically, the widows who lived outside the city center of Jerusalem felt they weren’t receiving the same treatment as those who lived closest the 12 apostles.

And so the murmurings of complaints became so loud that a church hall meeting was necessary. What were the apostles going to do to fix this problem? The crowd of believers demanded to know.

Together, they discerned the answer: the birth of the diaconate: a group of selected, training and ordained believers who felt a call by God to the service tasks of the community including but not limited to: caring for the often neglected widows, orphans, the powerless, the destitute. And though the word “deacon is not specifically mentioned within this text, it is a word used in other places in scripture. Deacon comes from the Greek word diakonos which means servant or helper.

For what was going on in Acts 6 was THE development of how Jesus-centered community life could flourish in the long-term. It was about an organization with an “ineffective infrastructure” that needed rebuilding before it could move forward to the next level of God’s best for it. And this was the discernment process: would the church be ruled by a few with assumed superpowers to do EVERYTHING or would the church be a place where gifts of service of ALL people could be celebrated and utilized for the community’s edification?

Depending on what church background we were raised in or experienced before coming to this church, we might not be on the same page with the word, “deacon.”

If we came from high church traditions, like found within the Catholic church, we might imagine deacons as those who serve in official capacities under the ordained priests– preaching assisting with communion preparation, wearing vestments, etc. Deacons often as those who are set aside as a “pre-cursor” to the ordination of the priesthood, a position which is set above the congregation in terms of personal calling and expectations of spiritual leadership.

If we came from traditions within mainstream Protestant life, deacons are often present within the fellowship of the church, but you often don’t know they are even there! The care for members of the congregation when special needs arise. Many times, deacons receive theological education in form of a seminary degree or attending a lay leader institute. They are often ordained, but never for administrative tasks– only for service.

If you grew up as I did in a traditional, low church tradition, you experienced a deacon in more of an elder role– serving as an administrative leader alongside the pastor (often hiring and firing the pastor!). In this context, sometimes deacons are asked to administer the caring ministries of the church, but most famously the deacons are those who emerge in all their glory on the day when the Lord’s supper is served. Deacons in churches like these are only allowed to serve communion to the congregation, a long with their pastor.

While I celebrate the diversity of church tradition and interpretation of this scripture text, what REALLY were the first deacons asked to do?

Despite all of the modern-day confusion, the first deacons, as we can tell weren’t asked to sit on the church council or serve as protective lawyers of the church’s assets.

The first deacons weren’t asked to make theological statements of doctrine about who was in the community and who was out.

The first deacons weren’t asked to pick out what color the altar table would be or if they’d sit in comfortable pews or hard ones.

The first deacons weren’t asked to be scholars in theology before beginning their time of service.

And most certainly, the first deacons weren’t given special clothes to wear.

The simple answer is that deacons were asked to serve. They assisted the apostles so that they could get back to the preaching, teaching and healing ministries of the church and not get bogged down in who did or didn’t get enough rice that month.

What were the qualifications of these persons. Deacons were to be of good standing in the community, full of the Spirit and of wisdom.

Notice what part I left out– the qualification of gender. While the cultural practice of a particular time and place revered men only, a better interpretation of this text for our time readers, “select for yourselves seven individuals”).

In a nutshell, deacons were to be the persons who lived their life in such a way that their sound character shone through first. And so today, it is our honor to ordain this one whom our deacon body has called out for service, Marie.

Our prayer for her this day and for all of us who will benefit from her ministry in this church is that through her service, more of us might come to know Jesus more.

All of us are given, as followers of Jesus, a calling of service. To some of us we may not be deacons, but there will be other talents God wants us to use in this place too. May we take a few moments as we watch and observe the laying on of hands of blessing for Marie– that God has called each of us to both serve and be served. This is the BEAUTY in the body of Christ!

Thanks be to God.

Redefining God as Parent
Next Post: A Conversation with Kevin »