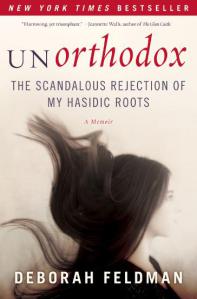 Though growing up in my sheltered Christian home, I thought my type of Christians were the only weird ones. But, it's not true. Fundamentalists are found in every religious tradition.

When asking a friend recently about what books she was reading and what she might recommend I pick up, she offered a work of a new author, Deborah Feldman called Unorthodox: the Scandalous Rejection of my Hasidic Roots. She offered, "It's like the Jewish version of your life." Intrigued, I sound found a copy and this memoir became one of those narratives I became glued to until I finished it in a couple of days.

I didn't read any reviews before beginning to read, so I have to say that the book turned out to be not what I expected. I thought it might be a memoir of escape, how Deborah gained strength to leave behind her family and Hasidic culture. But instead, the "escape" portion of the book is slim. The main event of this memoir comes in the journey of growing up that Deborah takes us on.

I was delightfully surprised though at what an all-encompassing view Deborah gave of what it is really like to grow up as a Haisdic Jew in New York City. We follow her from the days of her bewildering childhood, being raised by her grandparents as a child of a mother who ran away and a father without the mental capacity for child rearing.  As much as Deborah tries to fit in and be a "good girl," one her especially religious grandfather will approve of, slowly we as readers see her transformation. We see the joy that come s to her from sneaking library books under her mattress. We see the joy that comes as she thinks independently. We see the joy that comes as she makes friends in high school who are also experimenting with the outside world like her. We realize that such a huge cultural shift of being in a place to leave her Hasidic roots behind comes not from a rash decision one day, but from a lifetime of testing the waters, bucking the system in small ways and a slow process of imagining her life lived as a Jew but in freedom from oppression.

And while my friend who recommended this book suggested that Unorthodox was like my life, it wasn't really. While I was taught a strict, paternalistic view of the holy scriptures and to guard my heart from the "wilds" of secular culture too, I still was able to dress as I choose (except on Sunday-- always dresses!), visit public libraries and interact with people outside my culture. Thank God to all of this!

But, as I read, I could help but think of what the Christian comparison might be to Feldman's story. The Dugger family of the hit TLC show, 19 Kids and Counting came to mind. For these kids are raised via homeschooled education, uniforms of long skirts for the girls and modesty for all (including those ridiculous bathing suits), no tv or exposed to culture without a particular Christian message get the parents pre-approve of. The older kids are not encouraged to go to college and to expand their mind with knowledge their parents have not approved of first. Instead, they (especially the girls) are put on a track toward courtship and marriage (like in orthodox Jewish culture) so that as many babies could be created from the new unions soon. Why? So that the earth may be populated with more of "their kind."

I have to say that fundamentalism not matter what religious tradition it comes in scares me. Is this what faith is all about? Keeping a bunch of rules? Feeling pure of outside influence? Separatism?

I am so happy to be a part of a Christian tradition that often exclaims, "It is for freedom that Christ has set us free!'

I say three cheers to Deborah Feldman for getting out and courageously telling her story! I wonder when the one of the Dugger children (or the like) will begin to write their own memoir like this one. I'm sure it is coming some day. I already can't wait to read it too! These are the stories we need to hear more of, for sure!