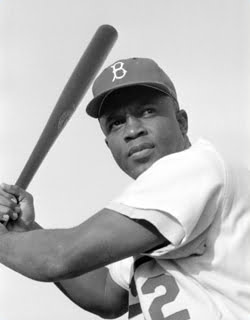 What does it mean to be the person who is the first to do something? To break the barrier? To go where no other person like you has been?

There are only a few special individuals in our world who know what such feels like.

Though I've found myself in a sometimes unconventional career choice, sometimes being "that" person who introduces others to their first experience of meeting a "woman" pastor, I have no idea what it is like to be the first ever to do something.

Today is the 66th anniversary of Jackie Robinson breaking the color barrier in the major leagues of baseball. Jackie's life and legacy is the definition of what it means to be the first. Courageously, Jackie achieved what no African-American had ever done before: playing baseball with teammates of another race. The story of the Civil Rights movement might not have been without folks like Jackie paving the way.

On Friday night, I was among the thousands who went to the box office to see this feature film, 42, timed appropriately to come out around this special day. I sat mesmerized by the film, actually sad when the credits played. I wanted even more!

While I enjoyed the story and appreciated the way the actors brought the story of this American hero to life, I was left wondering afterwards about all that was left out. At many points, 42 felt to me like the water-down white man's Hollywood version of a really painful and agonizing journey for this first. While there were conversations about or allusions to the hardships of Jackie's life-- persecution, hate mail, even the Klan after him, we never saw it in the film. (If you go to see 42, expecting truth brought to life-like the Eyes on the Prize documentaries, you'll be disappointed).

In a society that many of us think is so evolved-- we have an African-American President, an Hispanic woman serving on the Supreme Court and even six openly gay or bisexual members this term in the House of Representatives now-- being the "first" seems like yesterday's news. It is easy to think that being the first is not a big deal. Or that such a distinction does not come with a great price-- a price paid on the shoulders of years and years worth of sacrifices made by those trying to be that one.

Today, I am thankful for Jackie Robinson-- his courage, his faith, his determination, his love of baseball and mad hitting skills.

I'm thankful for others like him in our world today who take risks, laying aside what is acceptable in an effort to help all of us dream bigger dreams for our lives and be more inclusive of all people.

I'm thankful that Major League Baseball feels the same way and chooses to honor him every year on such a day as this. Baseball is better for Jackie Robinson gift to it.