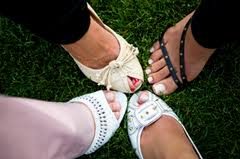 When I began the journey into the strange world called being a Baptist female pastor, I knew there would be challenges. I knew there would be folks who would throw the Bible at me wondering if I believed in the same gospel as them. I knew I would have trouble finding positions to serve that my male colleagues would obtain with ease. But, what I didn’t know is that some of my toughest critics would be my sisters, those who had come before me or joined the ranks of being a woman in ministry.

I once worked with a female supervisor who made a very big deal about wearing closed toe shoes in the pulpit. No exceptions during the time I worked under her. What was the big deal about open toed shoes– too sexy? I laugh about it with this colleague now and wear open toed shoes in the pulpit regularly. And, I’ve never heard complainants about my shoes being a distraction . . .

I have a colleague my age who was told once by an older female supervisor that she had to always wear pantyhose to church– even if she wore pants and even in the summer. Why? Don’t dare show one’s skin as a female? I have been known not to wear hose to church in the summer especially as I regularly preach in a robe over my clothes anyway. No one can see my legs after all, so who cares?

I supervised a female seminarian once who had just finished her initial preaching class the semester before with a female professor at a Baptist seminary. When I asked her some of the most memorable things she learned, she was quick to say:”We spent a whole session without the men in the room with the professor describing what kind of bra we should wear when we preach.” What??? There are no words for this.

The more I’ve learned about the “backstories” to these encounters of mentoring, the more I’ve also heard that the older women who teach such things usually don’t exactly know why they believe so strongly in these practices. It is just what they do. It was another woman who put the fear of God in them about shoes, hose and bras for preaching that they felt the necessity to put that same fear into their younger colleagues.

To all of this, I say it must stop.

To be a woman in ministry is not to become less of a female or to try to achieve some level of perfection so that we reflect well on our older mentors as one blog post yesterday seemed to suggest.

We, as women need to stop being the worst critics of one another.

Sure, appropriate dress, appropriate speech, appropriate presentation of our appearance are important professional development learnings, but my sisters, let us not take out the struggle of how hard it has been to get where we are on each other. There are some expectations that go beyond the realm of what it means to be human.

My sisters, practice kindness wear fun shoes while you do it.