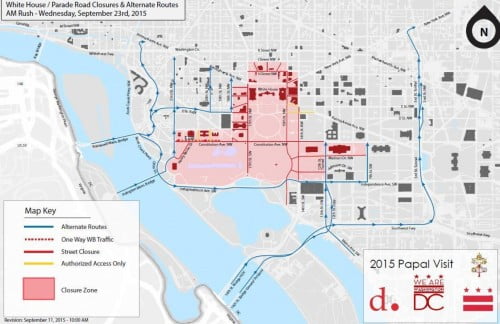 If you live in DC, NYC or Philadelphia, everything about your life patterns this week has been altered by these words, “The Pope’s in Town.”

We’ve changed our commute times. We’ve braved the crowds to get a glimpse of the holy man packing public transportation like sardines. We’ve seen “Pope” memorabilia fill the shops.

Simply put: the pope has not been far from our minds. I even downloaded (just for laughs) “Pope emoji” for my text messages.

And while I am not Catholic and could never be (you know that whole women clergy thing), I, like so many of you have loved getting to know Pope Francis.

I’ve loved getting to know him because he’s a refreshing a man of the people.

He’s let his humanness show (and you know I’m a fan of that) by wearing simple clothes and driving a simple car and asking folks constantly to “Pray for him.”

He’s striving to be a bridge builder by not leaving conversations when disagreements occur. He even participates in interfaith dialogue!

But this week in particular, I’ve loved getting to know the Pope all over again:

Because Pope Francis has reminded me of Jesus . . .

A Jesus that I say I know well, but maybe I don’t.

In the Spirit of Jesus, here are 3 Pope Francis lessons that I’ve learned this week: 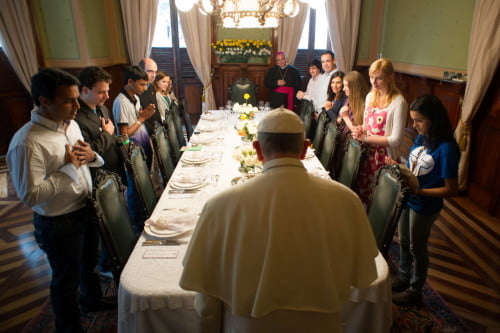 When you go to a new city, seek out the poor.

This lesson rang loud and clear on Thursday when the Pope addressed Congress and was then asked by Congregational leaders to dine with them at a fancy lunch. He said no. Instead, he dined at Maria’s Meals, a food program for the homeless in our city.

Such witness made me think of the story of Jesus dining with the outcasts and “sinners” of his day from Luke 14.

When Jesus met criticism about his choice he said:  “When you give a luncheon or dinner, do not invite your friends, your brothers or sisters, your relatives, or your rich neighbors; if you do, they may invite you back and so you will be repaid. But when you give a banquet, invite the poor, the crippled, the lame, the blind, and you will be blessed.”

Second, when you encounter children, love them. 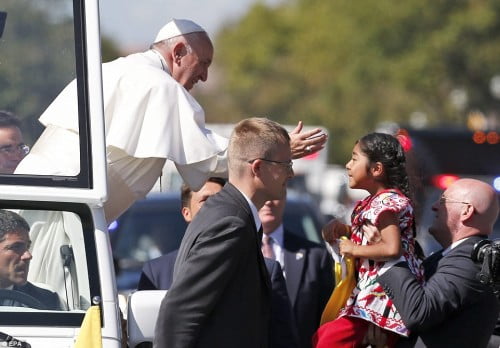 Everywhere Pope Francis goes, children flock to him. Not that this is unusual, of course, because everybody wants their baby blessed by the Pope.

BUT it’s how Pope Francis engages the encounter. Not annoyed. Not put off. But delighted.

At several points, watching the coverage on tv you could tell his behavior made several of the commentators nervous, though. I heard: “Doesn’t he know he has somewhere to be? He’s going to be late.” Yet, in those moments on the streets or outside his residence, there seems to be no other place he’d rather be. So BEAUTIFUL!

Reminded me of a story from Jesus’ ministry when complaints came too about Jesus’ time spent with children and he rebuked them saying, “Let the little children come to me, and do not hinder them, for the kingdom of heaven belongs to such as these.”

Third, when in meetings with people of influence or power, treat them like everyone else– those like all of us in need of God’s grace.

Who has the Pope not seen in America of influence? President Obama, Vice President Biden, Speaker Boehner, members of the UN security council and the list could go on.

But at any point does he seemed to be wowed by power or trapped by it?

Does he stay behind closed doors constantly with those with titles of “better than.” No, he laughs.

For, his entire American tour, we find him making time to be out among the people, with the same smile, the same laugh, the same sign of peace with everyone. One of his last stops will even include visiting a prison. No hashtag needed. #AllLivesMatter to Pope Francis.

Reminded me of a time when Jesus’ disciples argued over who was the greatest and he caught wind of their argument and goes to them saying, “If anyone would be first, he must be last of all and servant of all.” (ALL emphasis mine).

But hear me say, Pope Francis is not Jesus.

And we certainly will get ourselves into a heap of trouble if we try to make him such.

But what I believe, Pope Francis has done this week in America is point us back to Jesus. He’s giving us a new vision of what doing Jesus’ ministry looks like.

He’s shown us again a Jesus that loves unconditionally

A Jesus who isn’t afraid to do the work

And a Jesus who calls us to elevate the unseen.

It’s been such inspiring good news!

The Peace of Letting Go
Next Post: Communion with Integrity